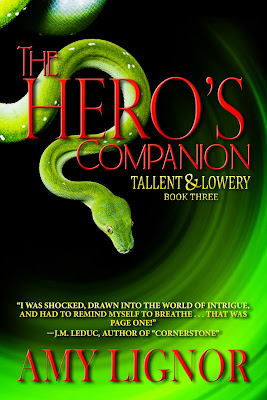 
Leah Tallent and Gareth Lowery have seen it all, utilizing everything they have to survive. But now, Leah’s father has gone missing and they have only seven days before he’ll be killed. The only clue to follow is a picture of one of the most famous icons of all time, and a strange map hidden in her father’s desk. This new mystery will take them from the pinnacle of the Acropolis to the depths of Cleopatra’s caves in order to unmask the man who has a score to settle.

In a location that’s been buried under rock for centuries the battle will begin, and the team will have to face the one foe that will expose secrets and unleash unheard of power in order to get what he wants. ‘The Hero’s Companion’—the one woman who will do anything to make sure the right side wins, will fight the good fight; but without Gareth, her time may just run out.

After going up against a man who believed he was the Devil, himself, the beloved characters of Leah Tallent and Gareth Lowery are exhausted. But a terrifying journey awaits…

When Leah arrives home her sarcasm burns even brighter, but a frightening call from Gareth’s sister changes the course of their holiday event. A new puzzle from the past has come to life, and involves a world of liars, killers and greed.

The heart-stopping suspense takes them from Coptic Cairo to the magical world of Petra in search of a cave that once housed a true ‘Illuminator’. They must find the answers to one of the biggest mysteries while staying one step ahead of villains who are determined to make sure that, this time, Tallent & Lowery do not survive.

In 1902, thirteen people came together to continue a tradition that’d been set in stone thousands of years before.

In 2012, Leah Tallent, Head of Research at the New York Public Library, is about to unearth the secrets left behind by this crew by joining a crazy man on a fanatical quest. Gareth Lowery has spent his life searching for the ultimate artifact; twelve keys hidden by men whose job it was to protect the single biggest secret ever kept.

The fantastic duo is soon immersed in a whirlwind treasure hunt with historical and passionate repercussions. From the eerie Winchester House to the darkness of Loch Ness, they quickly learn that the theory of duality is correct: For every bad there is a good and, for Heaven, there most assuredly exists...Hell.


“So where do you hail from, Ms. Tallent?”
Leah smiled at the James Lipton-like voice that emerged from Gareth’s throat. “The Hell-Mouth”
He grinned. “People prefer to call it Connecticut.” He tried to adopt a serious look. “Please be serious.”
“You didn’t live there.” Sighing, Leah took on her role as interviewer. “Fine. Where do you hail from, Mr. Lowery?”
“New Mexico.”
“Ah…land of the little green men. That explains a lot about why you’re so seriously messed up.”
“True. I am with you, after all.”
“Oh, yeah, I’m the odd one in this relationship.” Leah rolled her eyes, as Gareth continued.
“And you are a librarian?”
“Yes.”
“Why?”
Leah thought about her answer, “Because I love the smell of books. I love sitting in that basement far away from the world and reading what the masters had to say.” She smiled at him. “Of course, you can also meet up with the occasional handsome nutbag who walks in one day and blows up the cornerstone of your precious library in order to find an ancient book…”
Gareth nodded. “Okay. Okay. I am the odd one in the relationship.”
Leah nodded. “And your job, Sir?”
The twinkle in his eye was evident. “Unearther of ancient secrets.”
“Oh, please.”
He sat back in the chair. “What? That’s what we’ve become, after all.”
“No, we’ve become broken, cracked, bruised and mangled.”
Gareth smiled, staring up at the ceiling with a wistful expression on his face. “I always think how nice it will be in the ‘home’ one day. Us sitting there beside each other, gumming our food, as you throw plastic knives at me for putting you in front of some truly hideous monsters.”
“Looking forward to that,“ Leah remarked. “Although I wouldn’t place bets on the knives being plastic.”
Gareth cleared his throat and called back the voice of the intrepid reporter. “So…have you traveled, Ms. Tallent?”
“Ah…let’s see. The City had really been the only place until, oddly enough, some dude in a tux came into my life and then I found myself traveling to a haunted mansion in California all the way to a cold and seriously creepy home in Loch Ness.”
Gareth winced, and Leah pat him on the knee. “If that question is asked, should I just stick with: ‘Rarely, because I get air sick?”
“You don’t get air sick.”
“Not true. Those blonde stewardesses who constantly hit on you make me sick.” She winked.

(Read more of their “practice interview” on February 13th at Books With Bree.)


From defeating the worst of mankind to solving puzzles that have eluded others for centuries, Leah Tallent and Gareth Lowery must now follow a new trail to stop a madman from resurrecting a mighty Reich.

Although dead men supposedly tell no tales, the duo continue to follow clues left behind by true powerbrokers from Hell, and now they stand on the precipice of an infamous castle used by those who thrived on hate and terror.

Fighting for their lives from deep inside a labyrinth, they’ll stand atop a stage where an angel of death spoke to the masses, and climb to an ‘Eagle’s Nest’ to come face-to-face with a new enigma; a master puppeteer who’s pulling the strings on a monumental scheme they never saw coming.

Amy Lignor began her career in publishing as the Editor-in-Chief of Grey House Publishing in New England. Working in the publishing industry for decades, she is now the Owner/Operator of The Write Companion which offers full editing, ghostwriting and proofreading services.

Not only is Amy a bestselling author, she has been inducted into the ITW – International Thriller Writers Org. and is a writer/contributor for many companies, including: Authorlink; Humor Outcasts; The Feathered Quill; Bookpleasures; Suspense Magazine, as well as a variety of literary periodicals. She has been the head writer for Be First, Inc., and has just become the Editor-in-Chief of a new imprint: Hallowed Ink Press

Other books by Amy Lignor:
Click the covers to go to Goodreads

It would be an African Safari. I have always wanted to go. I'm not the kind who loves or prefer hot and humid weather but I'm willing to brave it.

I would love to go metal detecting in the ocean somewhere warm and where the sea is clear with beautiful coral!