Interview and Giveaway: Five - Out of the Dark (Five #1) by Holli Anderson 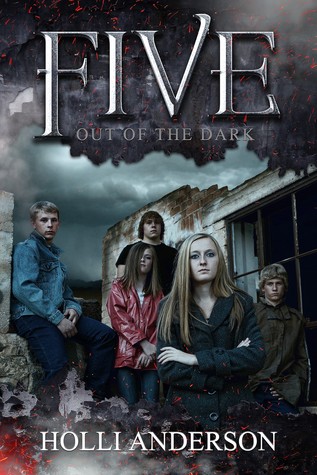 Five teenagers who’ve recently discovered they have magical powers and are living in the Seattle underground feel it’s their responsibility to protect unsuspecting humans from otherworldly foes.

Things are going well until Johnathan, their unofficial leader and the boy sixteen year old Paige is in love with, is bitten by a changeling – the venomous saliva causing him to metamorphose into a ravening beast with each full moon.

Paige vows that, no matter the cost, she will find a way to cure Johnathan of the evil that has embedded itself in his soul.

Johnathan’s monthly transformation and daily personality roller coaster isn’t the only problem they have to deal with. The Five are also gearing up to face their toughest and most dangerous enemy yet—a powerful and ruthless Warlock who will go to any means, including high school, to build his Dark Army.

MB's INTERVIEW
Thank you, Mrs. Holli Anderson
Twists, unexpected surprises… but how important is the ending of a book, especially when it is the first in a series?
It’s very important. You want to wrap up the story in a way that satisfies the readers, but leave them hanging just enough that they look forward to the next book with anticipation. There’s a lot of pressure there—if you screw up the ending to badly, you might lose readers who would otherwise have stayed fans through the entire series.

What it takes to write a book, even if it’s catalogued as Young Adult, that can be read at any age?
It doesn’t matter what age the characters in a book are if the story is timeless. You have to create a story that pulls people in—that they can relate to, no matter their age. Most of us have common problems and goals in life—things we’ve been through and either conquered or that have conquered us. We pull for the good guys and, even though we might have some empathy for the bad guys, we don’t want them to win. I write for Young Adults, but, I feel that my books translate well into the adult world.

How and why do you like things to be in your book: black or white, good or evil or shadows of gray?
I feel like I’ve written a combination of those things. There will always be shadows of gray—times when my characters have a hard time deciding what is right and what is wrong, sometimes, maybe even making the wrong choice for the right reason. But, there are also distinct instances of good or evil, where, I hope, you can feel the shudder run down your spine when evil is at hand and cheer whole heartedly when good triumphs.

What it takes to build a believable fantasy world?
Five Out of the Dark is an Urban Fantasy, so it’s based in our world and in our time, so I didn’t have to build much of a world. I just had to make some new rules and introduce some non-human characters to the world as we already know it.

I have huge respect for authors like Brandon Sanderson and Cinda Williams Chima, who can create new and different worlds and keep the laws and differences consistent throughout a series.

Having in view your Goodreads presentation about your Bachelor’s Degree in Nursing, how many injury and vomit scenes will we find? Serious now, what is the ideal proportion of action in a Fantasy book?
There aren’t an overabundance of injury and vomit scenes in my book. One or two vomiting scenarios and a couple of injury scenes in Book One. Book two has a few more . . .

I don’t really know what the ideal proportion of action is. I feel like there should be some kind of action in each chapter or at least in every other chapter. You want the reader to keep turning pages—to make it hard for them to put the book down even at the end of a chapter. But, I think the biggest proportion of action—or the most intense scenes—should be saved for the ending.

Holli Anderson has a Bachelor’s Degree in Nursing—which has nothing to do with writing, except maybe by adding some pretty descriptive injury and vomit scenes to her books. She discovered her joy of writing during a very trying period in her life when escaping into make-believe saved her. She enjoys reading any book she gets her hands on, but has a particular love for anything fantasy.

Along with her husband, Steve, and their four sons, she lives in Grantsville, Utah—the same small town in which she grew up.

Great interview, guys! Nowadays it's hard to give an age to a book since YA is not really read by young adults anymore. I actually know more adults that read in general than teens myself. Thanks for being on the tour, Cremona! :)

If the Synopsis hadn't already piqued my interest in reading Five-Out of the Dark, then Ms. Anderson's response to What it takes to build a believable fantasy world definitely won me over. Brandon Sanderson is one of my favorite authors.

This sounds like a great beginning to a series. I wonder if Paige will find the cure or if Johnathan will be lost to the ravening. I can't wait to find out.

Sounds right up my alley, love the genre. Hopefully this will be a series too. crystalbluern at onlineok dot com

Thanks for being part of the tour! And, thanks everyone for the positive comments. This book is book one of a series-- Book Two will be out March 31st!

the synopsis won me over, hands down need to read this. the interview was great! loved the authors responses. :)