"Whitney Dineen serves up an honest and hilarious portrayal of motherhood. Motherhood is tough and you're going to laugh or cry; you should always choose to laugh."-Jen Mann, NYT Bestselling Author of My Lame Life 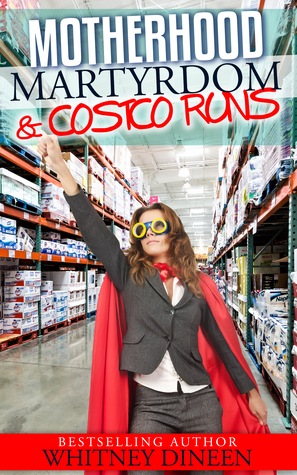 And that’s just the beginning. Whitney shares the ridiculous highs and excruciating lows of her catapult into motherhood. Enjoy the ride as this new mom vows to give up profanity while falling in love with… you guessed it, Costco. Be careful, because if you’re anything like Whitney, you may just pee a little.

Motherhood Martyrdom & Costco Runs takes the reader on a roller coaster of emotions as Whitney plummets into postpartum depression, desperately tries to get her kids to stop yodeling in public restrooms, and comes to terms with the fact she’ll never quite be queen of her own kingdom. Get ready to laugh, cry, cheer, and pat yourself on the back for the sake of mommies everywhere. And while you’re at it, stop by Costco for a case of toilet paper and a Very Berry Sundae. You won’t regret it!

Early Reviews:
Dineen writes in the vein of Erma Bombeck and David Sedaris, with a life-is-funnier-than-fiction humor. Her prose is short and punchy, making you wince along with her when her girls (ahem) say the darndest things in the checkout line and nod with understanding over her aversion to snow days. While many of the stories are humorous, Dineen doesn't shy away from the tough stuff, such as her struggles with post-partum depression. As far as parenting essays go, this is one of the best out there. Dineen is self-deprecating and relatable, as well as vulnerable, letting it all hang out in a style that is reassuring in a girlfriend-y way, seeming to say "Hey, we're all in this together, let's eat some soft pretzels and chat." 5/5-stars, San Francisco Book Review

"Erma [Bombeck] would probably get the biggest charge out of Motherhood Martyrdom & Costco Runs. It's beautifully written and a joy to read, even the parts that are embarrassing for some Victorian throwbacks like the author's husband. While the title and even the dedication seem to imply a specific subsection of the public may want to read this, I'll beg to differ and recommend it to everyone, breeders, non-breeders, even those whose sense of humor is somewhat challenged, as mine is. Dineen works a bit of magic here in this authentic, inspiring and very human collection of humorist writing. MotherhoodMartyrdom & Costco Runs is most highly recommended." -Readers' Favorite, 5/5-stars

"Whitney's book, her voice, and experience share [are] hilarious but also raw, honest, and beautiful. If taken to heart and mind, this book can help drive you to do good in the world and in your own personal life both as a mother and as a person." -Portland Book Review

"With Motherhood Martyrdom and Costco Runs, Whitney Dineen has given us a beautiful, comical, and often poignant look into what raising children is really like. I found myself laughing and shedding a tear or two as I devoured the pages of this fantastic book. I absolutely adored it. And now I'm off to renew my membership to Costco!" -Bestselling Author, Jennifer Peel

While attending the University of Illinois in Chicago, Whitney Dineen was discovered by a local modeling agent and began an unexpected career as a plus-size Ford model. She modeled in New York City before moving to Los Angeles with her husband.

During “The Hollywood Years,” Whitney was bitten by the writing bug and started creating characters that are inspired by strong women with a great sense of humor. Her first romantic comedy, She Sins at Midnight, won a silver medal in the 2015 Reader’s Favorite awards. Her second, The Reinvention of Mimi Finnegan, is a finalist in the 2016 RONE Awards, won a silver medal at the 2016 Reader’s Favorite Awards and won Honorable Mention at the London Book Festival. Her third chick-lit book, Mimi Plus Two, is causing all kinds of controversy and who the heck knows where it will land. Although, it was a finalist in the Reader’s Favorite Awards and a Runner-Up at the London Book Festival.

In addition to her love of chick-lit, Whitney has also written a series of adventure books for middle readers. The first two books in her series, Wilhelmina and the Willamette Wig Factory and Who the Heck is Harvey Stingle? are both available now. Book three, Beware of the Basement, is due to be released in the spring of 2017.

Whitney and her husband, Jimmy, have relocated to the beautiful Pacific Northwest to raise their children, chickens, and organic vegetables.