18+ "Go ahead and get the tissues handy when you start reading Victoria Danann's 2nd book in the Exiled series, CRAVE...Once again she has given her readers a very well written, emotionally loaded story you can't put down(you'll crave it) until the last page. This is Crave and Dandelion's (Dandy) story....." - Goodreads, Nelta

Seasons came and went as Crave was held in isolation, chained in darkness, kept in filth, starved, tortured, taunted, taken to the point of a welcome death only to be revived so that his tormentors could begin the process again. The woman who held his heart waited for him and never gave up hope that he was alive. After his rescue, memory and sanity gone, she will plumb the depths of love. Because only one person can bring him back from hell.

Dandy and Crave had taken the hike up the western mountain to the waterfall pool. Everyone knew where it was, but few people went because the effort to get there was worth mention.

The pool was small, only fifteen feet across, but the water was beautiful and clear. It was also cold since it began its journey higher up as snow melt. Crave thought it was the prettiest spot in the world, surrounded by pink granite outcroppings, aspens and evergreen trees.

They’d removed their clothes and jumped in, Dandy shrieking about the cold while he pretended to be immune and laughed at her. They swam and splashed, but after a time ended up kissing and exploring each other’s postpubescent bodies.

She laughed. “You can’t just say I’m your promise, Crave. You have to ask me. Don’t you know that?”

He looked a little hurt, but started again. “Dandelion. I love you. Are you going to be my promise or not?”

“I will.” She smiled showing off her white teeth. Then she grew serious as a thundercloud. “But I’d better never catch you with another female.”

Crave was offended at the suggestion. Even in his fantasies, the only female he could imagine mounting was Dandelion. “I wouldn’t do that.” Understanding flitted across his boyish features as he considered the implications and his expression changed to a look of worry. “Same for you.Right? No other males.”

Dandy smiled a perfectly coy female smile and drew closer. “I would never, Crave,” she breathed. “You’re my promise.”

His forehead smoothed as he relaxed then promptly dunked her under with a mischievous grin. 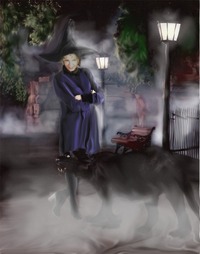 Her paranormal romances come with uniquely fresh perspectives on "imaginary" creatures, characters, and themes. She adds a dash of scifi, a flourish of fantasy, enough humor to make you laugh out loud, and, occasionally, enough steam to make you squirm in your chair. Her heroines are independent femmes with flaws and minds of their own whether they are aliens, witches, demonologists, werewolves, hybrids, psychics, or past life therapists. Her heroes are hot and hunky, but they also have brains, character, and good manners... usually.

Victoria lives in The Woodlands, Texas with her husband and a very smart, mostly black German Shepherd dog.