John E. Wade II, retired CPA, author, investor, television producer, and philanthropist, reveals in his memoir, The Bipolar Millionaire, his personal struggle with bipolar disorder and how he has succeeded in living a balanced and blessed life, despite his mental illness. 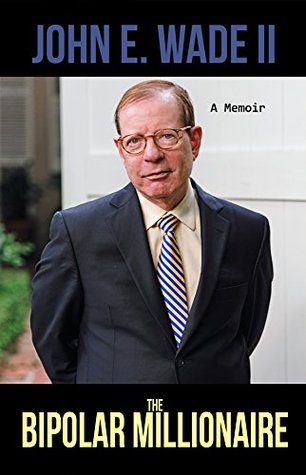 John E. Wade II, retired CPA, author, investor, television producer, and philanthropist, reveals in his memoir, The Bipolar Millionaire, his personal struggle with bipolar disorder and how he has succeeded in living a balanced and blessed life, despite his mental illness.

Wade takes the reader through his family experiences, political aspirations and beliefs, spiritual journey, relationship trials and errors, all while battling mental illness.

Through his religious beliefs, personal perseverance, and the help of friends, family, and his mental health professionals, Wade lives an active, creative, and successful life.

His memoir doesn’t end with contentment at achieving a balance in his life, however. Instead, Wade expresses a determined vision for the future, aiming to assist humanity in what he describes as achieving heaven on earth through his writing, political and spiritual endeavors.

I was struggling and dropped into a walk from the jog required of fourth classmen. It was an autumn day in 1963, just a month after I’d had a near-fatal attack of meningitis, and I was still fighting to regain my strength. Panting for breath, I was confronted by a first classman. He asked very directly why I wasn’t jogging. I quickly replied that I had a medical excuse, knowing full well that the excuse had expired. He ordered me to produce the excuse, which I did. Noting its date, he nonetheless allowed me to proceed.

Soon, I was in the academy hospital, lying flat on my back in an almost catatonic state, unable to cope with my mental torment. Although this severe depression, the first in my life, was not diagnosed at the time, it must have been my first bipolar episode, possibly having been triggered by the recent attack of meningitis.

My mother and Carol, my then-girlfriend, came to try to revive me, but I don’t remember responding. Years later, Carol told me that I asked her to help me kill myself, but I have absolutely no memory of making such a request.

Until this illness I had been a model cadet. I had prepared physically according to academy guidelines, so the transition to basic cadet summer was rigorous but easier than it would have been without vigorous training.

One other thing that helped me during basic cadet summer was the stream of daily letters from Carol. My fellow cadets were jealous, partly because of the letters, but also because of the picture of her I had in my room. Even though it was black and white, it was clear that she had blond hair, a sweet smile, and a pleasing, pretty face. That face helped me get through the rest of what we all had to endure to complete our training.

Each week we were given certain “knowledge” to learn, such as types of aircraft or chains of command. I always spent part of Sunday afternoon memorizing the information so that I could recite it during Monday’s meals. The upperclassmen pointedly asked several questions of each basic cadet, which kept us from finishing our entire meal. The first classmen took turns performing the interrogation, but as the questions were considerably shorter than the answers, they always had plenty of time to eat. I always felt I was short-changed because I was the only one who knew the trivia from the first day it was due, and yet I didn’t get a chance to eat more than the other basic cadets.

At the end of basic cadet summer, all the cadets were subjected to a physical fitness test, and I scored the highest in my squadron. At about the same time, we also went on a survival exercise in the mountains for which we were organized into small groups with twenty-four hours’ worth of food and about a week’s time to find our way back to the academy. The experience was particularly taxing for me. I became so obsessed with saving my food that I still had some left when we got back to the academy.

After the final tests, those of us who successfully completed basic cadet summer became fourth classmen. My personal excitement was not long lasting, however. Although I had scored high marks on the physical tests, I was disappointed with my first academic grades, which included some Bs, as I was used to all As in high school. When I asked a first classman for his opinion, he said I did just fine considering that I came from a weak high school.

Basic cadet summer had ended—then the meningitis hit. I’ve since read that physical illness can trigger the onset of bipolar disorder, and although the diagnosis was not made at that time, I believe that is what had happened. My father eventually was diagnosed as having bipolar disorder also, so it appears that I was genetically predisposed to the condition, as is often the case.

I had entered the academy in June 1963, and I received an honorable medical discharge that December; whether I was right or wrong, I considered the situation a great disgrace. It was definitely a life-defining event for me, and I was overcome with depression.

But, there was another aspect to my failure at the Air Force Academy that I didn’t disclose to anyone else until years later: part of the reason I attended the academy was that I had presidential ambitions, which I knew would be shattered by the stigma of mental illness. I internalized and brooded over that stigma for the next forty years.

To make matters even worse, when I finally got home I also lost my girlfriend.

It was quite a shock to me and had a negative effect on my confidence with the women I would date for most of the rest of my life.

I have often wondered what would have happened had I not had the meningitis and bipolar episode. What aspects of my life would have been altered? It’s a haunting possibility to consider.

Still, even though the realization of some of my dreams has eluded me, I have had and am having an interesting, fulfilling life in spite of bipolar disorder, and I invite you to understand its role as I work toward what I believe is my destiny.

I was born in Decatur, Alabama, grew up in Georgia and Mississippi, and have lived in New Orleans for many years. After high school, I attended the Air Force Academy for a few months until I received an honorable medical discharge resulting from a severe case of meningitis and my first experience with bipolar disorder. Eventually I enrolled at the University of Georgia, where I received a BBA and MA, was named the most outstanding senior accounting student, and served as president of Beta Alpha Psi, the accounting honor society. I worked in accounting for nearly thirty years, in both the private sector and eventually for the federal government.

I began writing in 1998, and my first book-length work, Focus Investing, was purchased by John E. Wiley & Sons, but never published, because of changing market conditions. Still, I had discovered the joy of writing and have since produced many essays, blogs, and books. Deep Within My Heart is a published book containing many of my earliest essays.

My next book project was conceiving and compiling How to Achieve a Heaven on Earth, a collection of essays from 101 other individuals–from world leaders to Nobel and Pulitzer prize winners–about the ten elements of Heaven on Earth as I conceived of them at that time (peace, security, freedom, democracies, prosperity, racial harmony, spiritual harmony, ecological harmony, health, as well as moral purpose and meaning–at the urging of my local editor, Charlotte L. Piotrowski, who pushed for “gender equality,” I have sense added “gender harmony” to the list of ten elements). I am especially proud of this work and hope it inspires humankind for generations.

In 2012, Ronald Reagan’s Wisdom for the Twenty-First Century was published, which excerpts some of Reagan’s most insightful and articulate quotations from before, during, and even after his presidency, coupled with commentary highlighting the ways in which Reagan’s wisdom is as relevant as ever. Then, in 2014, Glimpses of Heaven on Earth, a book of inspiring quotations and insightful essays by four other co-authors and me, was published. This book won the 2014 Living Now Book Awards bronze metal in Social Activism/Charity. My most recent literary project is The Bipolar Millionaire, my deeply personal memoir.

In 2006, I founded the charity Soldiers of Love, which encourages and enables ordinary citizens to work toward a better world. Soldiers of Love partners with other charities with similar goals, both in the local New Orleans community and beyond. In 2011 I began producing the television series that also relates to the the goal of Heaven on Earth.

I am passionate about travel and have visited China, India, Egypt, Israel, Syria, Jordan, Brazil, Argentina, much of Europe, Costa Rico, the Caribbean including Cuba, as well as much of North America. Some of these trips have been spiritual journeys and mission trips. I enjoy learning about other cultures and my travels inspire my writing and philanthropy. I am equally passionate about my adopted hometown. I enjoy New Orleans’ unique food, architecture, and music, as well as Saints football games. I also cheer on the Bulldogs–The University of Georgia, which I attended, and Mississippi State University, where the Davis Wade Stadium was named after my father.