This Saga is on my own (very) Short List Must to Read!

#1 "Mom always says the angels walk among us. She forgot to tell me that sometimes they're not all fluffy and nice."

Seventeen-year-old Caleb Wood has seen people he calls the walkers since he was a baby. It didn't take long for him to realize something…no one can see these strangers but him. They never stuck around or tried to touch him. And they never said a word. That was until one day on the first day of class in his senior year when an incredibly gorgeous girl strolls into his life…and things are never the same again.

Soon Caleb realizes he has stepped into the middle of a growing conflict between two ancient groups. And his ability to see the invisible ones, the half-breeds that want to modify the human race, just might be the only hope both he and the mysterious, but infuriating, Gia, have of making it out alive.

#2 Caleb Wood now knows the Dark Seraphine's true identity. But now he must deal with his Lost Seraphine. Can he accept the things he has learned about his father's true identity while trying to save the girl he loves from herself? Book Two of the Seraphine Trilogy and prequel to the Lost Immortals Saga is coming soon... 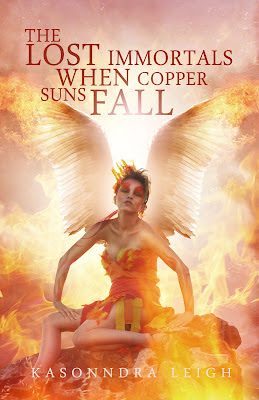 #1 It has been fifty-five years since the angels of the Apocalyptic War attempted to wipe out humanity. Now a new nation has been built where alchemy is forbidden, and angels fear for their lives as they hide among the mortals.

The city’s leaders share one view on the ancestors of angels: shoot first, no questions.

When her twin brother falls into a strange coma, sixteen-year-old Chela Prizeon vows to discover her role among these exiles, the royal angels known as the Lost Immortals.

Chela’s only hope lies with the mysterious, but infuriating leader of a rebel group. But can she trust this boy, someone who can control her dreams and her heart.

#2 Facing an unstable future, Chela Prizeon leaves Castle Hayne and crosses over to enemy territory in pursuit of Faris--the boy of royal blood who is cursed by a bitter rival. But soon Chela learns that he has been taken deep into the treacherous frozen prisons--a majestic, but deadly place where people enter and are never seen again. To find the boy she loves, Chela must join forces with one of her greatest enemies. And even though she pulls strength from the good in her powers, she finds herself drawn to the dark side's temptation as well.

Narrated from both Chela's and Faris's point of view, this enchanting sequel to When Copper Suns Fall will take them on a voyage into unknown lands, where the dark, twisted, and revengeful wait to make this their most dangerous journey ever.

She loves to play CLUE, Monopoly (the Indiana Jones version), and Pandora's Box (good writer's block therapy). She lives in an L-shaped house with a garden dedicated to her grandmother. It has a secret library complete with fairies, Venetian plastered walls, and a desk made out of clear blue glass.

The Giveaways are organized by the author:

Awesome! Thanks for the chance to win these books!

I heard that the series are interesting and the author speaks about an amazing story.I haven't read it yet,but I'm going to do it. Thank you!!

I havent read this series yet but I have heard great things! I have them on my wishlist! Thanks!
-Amber