The true story is:... DIARY OF A LOST WITCH BLOG

Molly is in trouble. Running away from home to escape the dangers of her coven, she ends up in Edinburgh at a time of Corona. Homeless and running for her life, she must find a new coven and get the help she needs to protect herself, or she is not going to make it back. 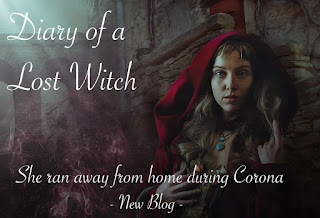 The streets were empty today, which was expected, considering the circumstances. I guess that worked well in my case. I still have to figure out where I would be spending the night.
I had to pack light. To not seem immediately like a traveler. Only the best of my things. My jeans, which I liked to wear with everything, my favourite sweater, which I was hoping would be warm enough for the weather here, some essentials and the blank diary my moms gave me for the road.

Sally, my birth mom, from whom I’d inherited my powers, always said that writing was my gift. Joe was the one to push me to study something else in college, to have a variety, so I majored in journalism. She waited so anxiously for my graduation. My whole family was going to be there, including my grandpa, George, who would travel to us all the way from New York when I was a child and we lived in Florida, to give me lessons on how to use my powers. But, like  a few strong witches before me, that was both a strength and a weakness.

I never made it to graduation. I had to take off in the middle of the night, the night before, because of May’s coven. A group that I used to be part of and that I now wish I had never met.

That was two weeks ago.

So far I’ve been hitching rides and staying away from any main cities.

I managed to talk my way into a private flight to Scotland, I still have no idea how. They must have really needed a stewardess. Two of them were sick. It was funny, serving a rich Asian family, dressed in a uniform that almost fit me.

But I made it. Edinburgh. There would be strong witches here. A few covens. I’d have to be careful. Make sure I get the right support. Eventually May’s coven would figure it out. So I would have to be quick about it too.

Two police officers looked at me suspiciously as I was walking the large street called Princes street.

I needed to find a place to charge my phone so I could look for somewhere to spend the night. And groceries. My stomach was telling me I’d need something better than the bits and pieces I’d been munching on in the past few days on the road, too afraid to use my magic for food. My back was also aching for a normal bed.

The adventurous feeling that I’d first felt, running away from home is now gone. I hope it doesn’t stay tough for long.

About the author:
Following a short stint in the military, Reut graduated as a trained Opera Singer from the Jerusalem Academy of Music and Dance, and then worked in Berlin, singing church music by Mozart, Haydn and Bach. While arranging concerts in the city and managing artists, she discovered her passion for business. She joined fellow entrepreneurs in the 2013-2014 class at the University of Oxford, with a scholarship to study business (MBA), where she founds that creativity goes far beyond art. She later had a taste of corporate life, seeing the inside workings of some of the world’s largest finance, energy and manufacturing companies, and wrote for National Geographic. Leaving the world of corporate drama behind, she now pursues her dreams of becoming a fiction novelist, a self-published vegan author, blogger and youtuber. She first arrived in Scotland as a hiker, eager to explore the mysterious highlands, where she got her inspiration for her books and blogs.

Well, no not really… The true story is:
Once upon a time…

Reut was born in Camelot in the year 1201, following the famous explosion of the northern dragon tower. She has a degree in fantasy and science fiction from the University of Atlantis and this record can be found in the central library, now twenty thousand leagues under the sea. She likes phoenix riding, dragon fighting and painting the roses red. And Grimm’s Fairy Tales.

Start reading from the beginning of the diary...

Event Giveaway
a Rafflecopter giveaway
Posted by CCAM at 12:58 PM

Thanks for hosting!
There’s a new post out today at: http://reutbarak.com/diary-of-a-lost-witch-may-18/
Where Molly finds out Alice’s greatest secret!
To start reading from the beginning of Molly's diary, the first entry is here: reutbarak.com/lost
Enjoy and good luck

Thanks for hosting!
There’s a new post out today at: http://reutbarak.com/diary-of-a-lost-witch-may-18/
Where Molly finds out Alice’s greatest secret!
To start reading from the beginning of Molly's diary, the first entry is here: reutbarak.com/lost
Enjoy and good luck

I enjoyed the excpert. Sounds like a read I'll enjoy.

If that's the cover, it is very pretty. The storyline is unique and interesting. Best wishes to the author on the new release.

It's a blog!
Sorry I couldn't reply individually, but it seems I can't press the right button...
So thanks for the supportive comments, and
To start reading from the beginning of Molly's diary, the first entry is here: reutbarak.com/lost
Enjoy and good luck

Thank you for the opportunity to win! Sounds like an awesome read. Hope the release is going well

Neat cover, thanks for the review.

Awesome cover! Sounds like a great read. I can certainly relate to the wanting to run away vibe

The book sounds really good from excerpt and I like the book cover.

I love books about witches!! This sounds really good!!

I have been looking for articles on these topics for a long time. 카지노사이트 I don't know how grateful you are for posting on this topic. Thank you for the numerous articles on this site, I will subscribe to those links in my bookmarks and visit them often. Have a nice day.

Most valuable and fantastic blog I really appreciate your work which you have done about the electricians,many thanks and keep it up. Very useful info. Hope to see more posts soon! I really like to read this post, it shares lots of information to readers.a

Very Informative, good stuff. A good article is one that a person is aware of, to get something to learn from that article and your article is also one of them. We hope that you will share a similar article in the future and make us aware thank you.

Thanks for sharing this marvelous post. I m very pleased to read this article.
바카라사이트

Thanks for sharing with us this important Content. I feel strongly about it and really enjoyed learning more about this topic.
바카라사이트

I do agree with all of the ideas you’ve presented in your post.
바카라사이트