Eight years ago, an exploding gas main killed Ashley’s family and left her with a childhood she can’t remember. Eight years later, the forgotten past is behind her and life on her isolated farm is all she knows.

Until that past comes looking for her.

Until men with superhuman powers hunt her down in the night, determined to take everything she loves away from her again.

EXCERPT:
“So,” Patrick said after everyone sat down. “Cause for celebration soon, eh?”
Ashley glanced to him as she took a piece of garlic bread. “Huh?”
“Your birthday,” he supplied, a grin deepening the faint wrinkles around his dark eyes. “It’s still in three days, right? You didn’t move it?”
She faltered, and Lily laughed at her silence. “Silly, of course it is!” the girl cried. “And this one’s the best yet, because daddy’s here.”
Ashley picked up her fork and looked to her plate, unsure what to say. Even without her dad, her birthday would be fine. It always was.
She just hadn’t expected him to actually bring it up.
Oblivious, Lily turned her smile on the rest of the table. “We’re gonna make a big cake like last year, right?”
Rose smiled. “Of course,” she said, the slight tension in her voice hinting that she knew Patrick would be leaving the next day.
“Chocolate,” Ashley volunteered tightly. Gratitude showed in Rose’s eyes.
“Well, how about we start the celebration tomorrow?” Patrick suggested. “No rule saying we have to wait, right?”
Ashley looked up. “Really? But what about –”
She cut off, remembering Lily. Blinking, she dropped her gaze to her plate again, but not before she saw his pleasure at her reaction.
“Yeah,” Lily agreed happily. “A whole week of parties, and then it’ll be mom’s birthday too, and we can do it all over again.”
The clink of silverware echoed in the dining room.
“What?” the little girl asked, looking around the table at the silence.
Patrick swallowed. “I-I didn’t realize you celebrated that,” he said, his voice a rough semblance of normalcy. His eyes went to Rose and Jonathan, who both shifted awkwardly.
“Lily wanted to,” Ashley explained quietly.
“You said it was a good idea!” Lily protested. Confusion clouded her face as she turned to the others. “What’s wrong?”
Patrick cleared his throat. “Nothing, Lilybud,” he said, reaching over to squeeze her hand. “Just took me by surprise, that’s all.”
Looking unconvinced, Lily hesitated. “Is it okay?”
He smiled. “Of course.”
Brow still furrowed, Lily went back to her salad.
Ashley risked a glance in her father’s direction. His eyes closed briefly, and then he drove any trace of expression from his face and returned to his dinner as though nothing had happened.
She took a bite of her food as the joy of the moment before slunk from the room. It didn’t matter what he tried to pretend. She knew he was thinking about Rebecca and everyone else lost that night. They all were. 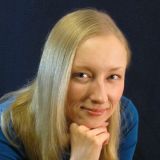 Megan Joel Peterson lives somewhere between the cornfields of Illinois and fantasy worlds filled with magic and wizards. She writes by day, writes by night, and occasionally decides to fit sleeping in between. The Children and The Blood is her first published novel.

Giveaway sponsored by the author