Guest Post and Giveaway: Caught in the Crossfire by Juliann Rich 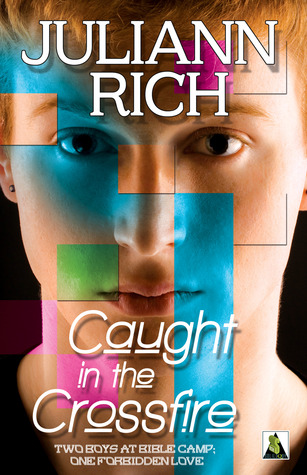 That’s the dilemma Jonathan Cooper faces when he goes away to Spirit Lake Bible Camp, situated along Minnesota’s rugged north shore, for a summer of fun. He is expecting mosquito bites, bonfires with S’Mores, and photography classes with Simon, his favorite counselor who always helps him see life in perfect focus.

What he isn’t expecting is Ian McGuire, a new camper who openly argues against phrases like pray the gay away. Ian is certain of many things, including what could happen between them if only Jonathan could surrender to his feelings.

Jonathan, however, tosses in a storm of indecision between his belief in God and his inability to stay away from Ian. When a real storm hits and Ian is lost in it, Jonathan is forced to make a public decision that changes his life.

We’re going to start this blog post with a quiz. Please choose the best answer for the statement below:

Question # 1: Writers should write what they know.

Oh, but before you answer, let’s examine the possible implications of each both A and B.

A) True: Writers should write what they know. On the surface this means that we should write characters, situations, settings, and conflicts that we know and understand.

Okay, that sounds reasonable, even prudent. But let’s take another step down this line of logic.

Does this mean writers can only write characters within their own ethnicity, socio-economic status, religious affiliation, sexual orientation, gender identity, ability level, or age range? And what about genres? What would happen to science fiction, speculative fiction, supernatural or paranormal stories? Imagine a world based on answer A and all the books that would never have been written if indeed writers could only write what they know.

B) False: Writers should not be limited to writing about what they know.
On the surface this sounds like total creative freedom. If I, a white woman living in Minnesota, would like to write a novel from the point of view of a Samoan boy living on Kauai, I can, relying solely on my imagination, because I’m a writer.

I don’t know about you, but that train of thought sets off about 50 horns blasting one warning in my mind, “Stop. Right. Now. Put down that pen. Step away from that computer. Or risk wrecking your story—or worse—disrespecting a whole bunch of people!”

The problems with the Imagination is all that matters position are clear. We, as writers, must be sensitive to the fact that our fiction is someone else’s reality, and that means we’d better approach our stories with reverence, an awareness of privilege, and a willingness to do our research.

Now I’m going to make a confession here. The quiz? Yeah, that was totally rigged. But before I give you the correct answer, let me tell you about my own journey with the statement, “Write what you know.”

About three years ago I began to write my first novel, Caught in the Crossfire (Bold Strokes Books, June 16th, 2014), a story about a sixteen-year-old Christian boy named Jonathan Cooper who falls in love with another boy at Bible camp. It was a story that seized me and wouldn’t let me go, though I did worry because I am neither A) sixteen, B) a boy, or C) gay. While I felt intuitively that this was a story I had to tell, I also felt a tremendous burden to get it right.

I began my writing journey believing writers should write what they know, and so I built the world of Caught in the Crossfire by drawing heavily on what I knew: the intensity of first love, the experience of being born into a conservative Christian home, and that unsettling first moment of questioning one’s inherited faith. I plucked gems from my memories of summers spent at Bible camp as a child and the wisdom I’d acquired as an adult raising a gay son. It was a good place to start.

But I quickly discovered it was not the place to stop.

There were aspects of Jonathan’s life that I did not know personally: discrimination based on sexual orientation, teenage culture from a guy’s perspective, the physicality of male-male sexuality.

Caught in the Crossfire challenged me to rethink my acceptance of one of the most commonly doled out pieces of advice to writers, “Write what you know.” In fact, it demanded I travel beyond the boundaries of my own knowledge, and lucky for me, I had beta readers who gave me invaluable feedback based on firsthand experience, which made all the difference in Caught in the Crossfire.

In the end I concluded that the answer to the quiz was C: Both True and False. Writers must have the freedom to explore any topic artistically, but we’d better make sure that we know what we’re talking about before we attempt to write beyond our own personal experience.

About the author:
Minnesota writer Juliann Rich spent her childhood in search of the perfect climbing tree. The taller the better! Perched on a branch ten to thirty feet off the ground and surrounded by leaves, caterpillars, birds and squirrels was a good place for a young girl to find herself. Seeking truth in nature and finding a unique point of view remain crucial elements in her life as well as her writing.

Juliann is a PFLAG mom who can be found walking Pride parades with her son. She is also the daughter of evangelical Christian parents. As such she has been caught in the crossfire of the most heated topic to challenge our society and our churches today. She is committed to writing stories that shed light on the conflicts that arise when sexual orientation, spirituality, family dynamics and peer relationships collide.

Juliann lives with her husband and their two chronically disobedient dachshunds in the beautiful Minnesota River Valley.

Author's Giveaway
a Rafflecopter giveaway
Posted by CCAM at 1:00 PM

This is a new to me author, and this book is going on my wishlist. Thanks for a great giveaway.

Love the cover attracted me right away.

I want to know how the mother mentally accepts what is...

Wow cover is super cool, very different from most books i would pick this up at a book store, thank you for the giveaway

The cover its eye catching but I also liked the blurb!
Thank you for the giveaway.

Sounds like a great book and love your perspective on writing. Thanks for sharing

The cover is so eye catching very cool cover, far as the story it is not something i normally read but i do think it sounds good and would love to give it a chance as it sounds like a very good story and something that a lot of people face everyday. I would probally end up loving it. thank you for the giveaway

The cover grabbed me right away!