Excerpt and Giveaway: A French Princess in Versailles (The French Girl series #3) by Anna Adams 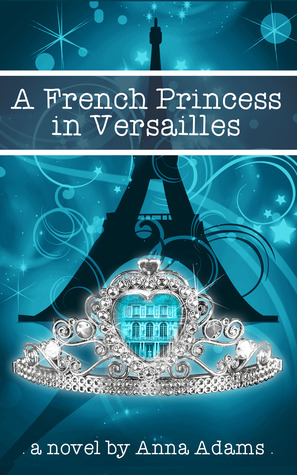 Determined to escape her failed pop career and focus on her classical training, Maude Laurent moves back to France and enrolls at the prestigious National Academy of Arts.
Between balls, charity events, concerts, and navigating in the French elite, Maude has to prove she’s cut out to become a professional opera singer in a world where pop music is regarded with disdain.

Though she fights it, her past catches up with her when she meets an English teacher who forces her to see a world beyond the safety of the Academy and takes her down an unusual musical journey where the risk is great and the reward uncertain. And when a chain of events bring her and Matt back in the same town, Maude will learn that music can bring people closer or tear them apart forever.

“I’ve decided to move back to France.”

When she spoke the fatal words, silence filled the room, and Maude enjoyed the savory sense of satisfaction to its fullest. Her glass was half raised and half full with clear, icy, mineral water, transparent and brilliant as the truth.

The glass slipped from her fingers, and as easily as crystal explodes in a million pieces, the shocked silence shattered and the reporters craved for every detail of the decision, details Maude refused to give.

She grabbed a tissue and rubbed her dark pencil skirt furiously. She’d worn that precise skirt because she associated it with seriousness. Solemnity was required of her in the midst of a scandal. Her natural dark hair tied into a tight bun, very little makeup on her smooth chocolate skin. Just enough foundation to hide that she’d barely slept a wink the night before. She’d weighed the pros and the cons. But it all came down to one thing: her love for music.

Her passion for classical music had helped her years ago when she lived in a basement in the north of France. In those days, she’d dreamed of becoming a concert pianist or an opera singer.

Dreams, like nature, change over time. When she’d been discovered by James Baldwin almost two years ago and whisked off to New York, she’d fallen in love with pop music and her ambitions grew as did her love for music. She wanted to show the world that classical and pop could make a wonderful combination. This ambition had given birth to her first self-titled album. Success, praise, fame. All had ensued with impeccable timing.

How had her dreams turned into frightful nightmares? She’d lied, unwillingly to be sure, but the consequences had been disastrous. She’d lost her way.

She thought about this as her uncle led her out of the crowded room, the sound of her heels muffled by the wool carpeting. His grip tightened around her elbow. Security guards surrounded her every side, but as they rushed outside to the dark sedan waiting for her, a crowd had gathered. Maude’s tenacious bodyguards contained a vocal, vociferating mob with difficulty. They held cardboard signs instead of pitchforks, yet their intentions weren’t so different from that of angry villagers in medieval times. The focus of public outrage may differ through time, but its force rarely alters.

“Aren’t you ashamed of yourself? Faking a relationship just to sell more albums?”

She might’ve argued she wasn’t the first to do so and probably wouldn’t be the last. Did it matter? She’d been caught, no one else had, and that remained the only difference.

The origin of the leak remained a mystery although she had a pretty strong hunch it was Lindsey Linton, the blonde beauty who saw in Maude an unprecedented rival.

“Duck!” yelled James. Too late, much too late.

A ripe tomato landed in her dark mane and oozed down her neck, leaving a reddish trail of slime. Maude continued to advance to the car, swallowing repeatedly to push down her disgust. Her heart stopped when she noticed a girl, not much older than twelve, clutching her music album. Tears were streaming down her face as she squeezed the album against her chest, biting her lip with an unsettling fierceness.

Incomprehension, disappointment, accusation. Her eyes were the accumulation of all the feelings Maude’s scandal had unleashed. The little girl’s expressive distress tormented Maude more than any of the cardboards or edibles thrown at her. She faltered at the car’s door, one foot inside, one foot out, prompting a bodyguard to push her head inside, entangling her hair with the tomato further. His grip hurt, and she caught one last glimpse of the girl before he slammed the door in her face. A rotten banana hit the window.

It was high time to go, and Maude was keener than ever to escape public fury.

While the pop world no longer wanted her, the classical world greeted her with open arms. After her performance in Aida a couple of days ago, in which she’d played the devious Egyptian princess intent on thwarting the purest love of all time, her talent had been recognized by the National Academy of Arts, the most prestigious French music school based in the Parisian area.

No paparazzi, no scandal, just music. Going back to her classical roots. So what if her dream of bringing classical to the pop world was to be ignored henceforth?

The pop world didn’t want her. And as much as it hurt, as much as the crashing sales hurt and the dreadful names she was being called pained her (“a conniving little Frenchie”), she needed to step away from it all. To go back to a peaceful existence in France where no one had really heard of Maude Laurent anyway. Forget launching her international career.

She would live in blissful anonymity.

That was Maude’s plan. And she honestly hoped everything would go smoothly.

Born in France, raised partly in the United States and in France, Anna Adams grew up loving stories in French and English.

Anna currently lives in Paris where she studies at la Sorbonne as a Law Student.

She's the author of the French Girl series for which she is writing the the third installment.

When she isn't writing, Anna likes to travel in Europe and dreams of going to Asia and Africa.