to get some questions answered - Murder Misread (Maggie Ryan Book 7) by P.M. Carlson

"Thoroughly believable characters with depth and humor and finely realized senses of grief and anger. Carlson plays fair with the reader while making the unmasking of the criminal a surprise indeed." — Susan L. Clark, The Armchair Detective
"As usual, P.M. Carlson gives us a spell-binding, multidimensional puzzle, interesting background material, and fascinating and appealing characters." — Phyllis Brown, Grounds for Murder 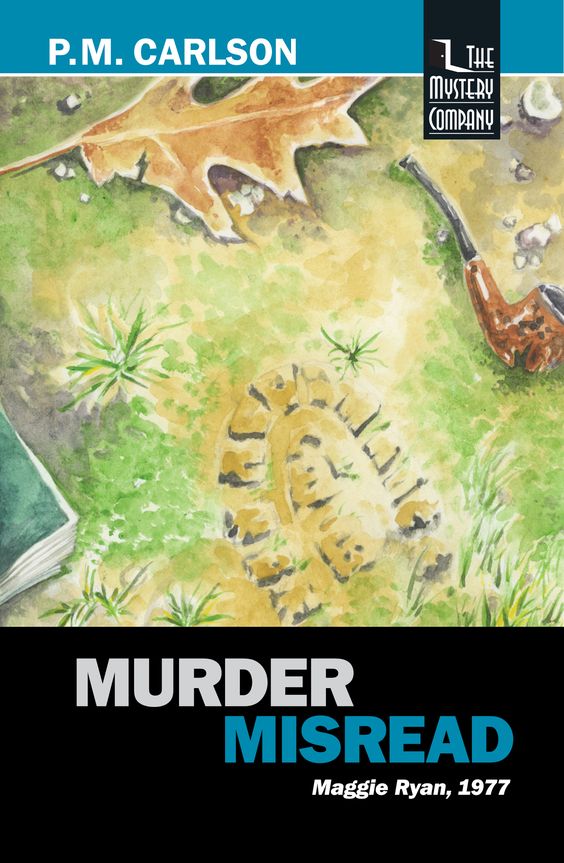 In 1977, statistician Maggie Ryan returns to her alma mater to help Charlie Fielding analyze his reading research. Charlie, professor and film buff, is studying the eye movements of skilled readers. Maggie’s work is interesting, her kids have good daycare, and her actor husband Nick O’Connor is working nearby. But the happy summer plan is disrupted when Charlie’s popular colleague and rival, Tal Chandler, is found shot near campus.

When a turf war between town homicide detectives and image-conscious campus police hinders the investigation, Maggie and Nick team up with Tal’s grieving widow to get some questions answered.

1. Since Audition for Murder (2012), Maggie Ryan was your heroine in 7 books. How did she change in all this time? How about you as a mystery author?
The Maggie Ryan I began with didn't show up until the middle of the series. Let me explain. 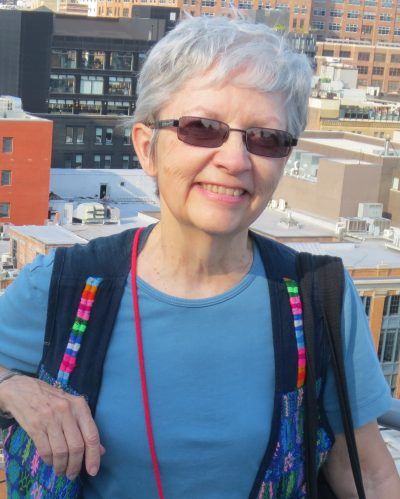 When I first began thinking about writing a mystery, I wanted to start with what I knew well–– family, academic settings, theatre, scientists, the problems of women in the 1970's. I didn't feel ready to write about non-traditional jobs like PI or police officer. Crime fiction heroes were mostly men, and the trailblazing women cops and PIs (by Sara Paretsky, Linda Barnes, Sue Grafton) had few close family ties. I knew that amateur detectives in murder mysteries were a very unlikely group -- Sir Arthur Conan Doyle's drug addict in a deerstalker hat, Agatha Christie's old lady in an English village, Erle Stanley Gardner's recluse who raises orchids in a New York brownstone, and so on. Like the cops and PI's, they were loners, with no close family.

When I looked for female protagonists with children, I found them in the "woman in jeopardy" suspense novels, such as Mary Higgins Clark's, but in them the woman and her family were primarily victims. They were prey of the criminal, not hunters of the criminal, like the amateur and professional detective heroes I admired.

So the least likely hero-detective seemed to be–– a working mother! With toddlers!

I could write about that, but my experience brought up a new problem. Working moms have no extra time. What kind of working mom would take the time to solve crimes?

To find out, I began the Maggie Ryan series a few years earlier in her life, when she was still a college student, learning the skills and developing the interests that would be useful to her later for her career, for her family, and for her crime-solving. Change was an essential part of her character from the beginning. The world was beginning to expect different things from women and from mothers, and Maggie was adjusting and developing as we all were.

So the mother with toddlers who inspired me didn't actually appear until the middle of the series.

2. How do you create a (successful) series in which anywhere the heroine – not a detective/police worker – goes, a murder takes place? What is the risk to consider her a jinx?
It's true that writers of amateur detective series are caught in a bind. First, we promise our readers that we will give them a story involving a serious threat to our existence or to our ideals, and a human hero who will overcome obstacles and eventually restore balance to the world; second, we promise a puzzle with a psychological dimension, one that's serious because there's a major injustice involved, and complicated enough to exercise our minds and emotions. Third, we promise that the solution will be based on the real world, with everyday reality and rules of logic that we already know. It won't be fantasy or science fiction. We won't ask you to take a leap of faith into another set of rules, an alternate kind of world.

Instead, we ask you to take a leap of faith to accept that someone in everyday situations will repeatedly encounter serious problems, such as murder, and overcome them.

While you're judging mysteries against reality, remember that real private eyes spend most of their time looking through records for missing people or on stakeouts for divorce cases. And that real-life cops seldom see a fascinating murder case. Homicides are most often due to drunken rages or accidents or insanity–– very sad, yes, but seldom interesting puzzles. Staying too close to real life betrays the mystery writer's promise to deliver an exciting, human, puzzling story, and this is true across mysteries and across genres. When readers choose the kind of story they want to read, they are also choosing a particular leap of faith.

3. How important is and what are the advantages for a story when the author actually knows the police procedure? (or any other information needed in a real investigation)
I think it's very important to be accurate about police procedure, just as I think it's important to be accurate about the details of any other field that's important to a character's life. For example, in MURDER MISREAD, I looked at scientists studying reading. Basically, reading is looking at special little marks on a page or screen in order to learn what the author's thoughts are. In MURDER MISREAD, the scientists are trying to follow the action of the eyes, which do not glide along the lines of letters but jump from one point to another. How are the jumps measured? How can the scientists find out how the next point is chosen? Is the choice affected by the ideas being extracted, or by the physical arrangement of the marks? I had taken graduate courses and helped with research projects similar to the experiments by the scientists in the book.

Like learning to read, learning how to get information from a crime scene is also complex. Unless you have been a homicide investigator yourself, it's important to find someone who has done police work. When you find a cop willing to talk to you, the first thing to do is find out what books and courses are used by police. My expert friends recommended a rather grisly set of books on homicide investigation, and hid me in an adjacent room during a training lecture on autopsies so I could watch through a crack in the curtain.

4. You have already published 12 mystery novels and a dozen mystery short stories. What are, in your opinion, the best sources of inspiration for such stories and what do you do to keep the series fresh and interesting?
In addition to the common techniques of changing fields of interest, locations, and connections to characters, I find it keeps things fresh if I use new characters close to different aspects of the murder as my main point-of-view characters. In MURDER MISREAD, for example, the story is told from the point of view of the widow of the dead professor, and from the point of view of his colleague who has a rival theory and also loves films.

5. Ok, you must share with us! How skilled readers read? … and what makes a reader skilled?
Oh, dear, I must expose a dark secret: we experimental psychologists use weasel words too! A term like "skilled reader" is often vague, though it is sometimes carefully defined, depending on the experiment or study involved. In a study of understanding poetry, the psychologist might set up a test to see how accurately college students can define the meaning of metaphors in several poems, and define the term "skilled reader" to include only the best 10% of the test-takers. Obviously, the other 90% of the students were able to get into college and for other purposes–– such as the study in MURDER MISREAD–– they would also be considered skilled readers.

Personally, I would pass most tests to be considered a skilled reader in English. In Spanish, I would be slower and less accurate, but would get many test questions correct. In Russian, I would be able to sound out the words, and would know a few of the words, but if the experimenter was testing at a third-grade level I would probably fail. In Japanese, I would be at the bottom, well below children who spoke Japanese but knew only a few Japanese symbols.

For the purposes of reading this Q&A, a skilled reader is one like you, who has understood my thoughts from these little marks, and who now understands what a "weasel word" is even if you didn't know it at the beginning! 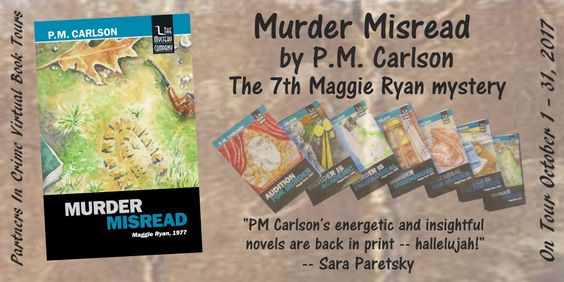 About the author:
P.M. Carlson taught psychology and statistics at Cornell University before deciding that mystery writing was more fun. She has published twelve mystery novels and over a dozen short stories. Her novels have been nominated for an Edgar Award, a Macavity Award, and twice for Anthony Awards. Two short stories were finalists for Agatha Awards. She edited the Mystery Writers Annual for Mystery Writers of America for several years, and served as president of Sisters in Crime.

Great interview. I really enjoyed it.

It's great to visit Mythical Books! I like the fresh angles this blog explores.