How long does it take to fall in love? - Eight Days on Planet Earth by Cat Jordan

"This is such a great book. I recommend it to fans of contemporary romance and anything space-related. It's magical. It's sad. It's beautiful. You'll love it. " - Chloe, Goodreads 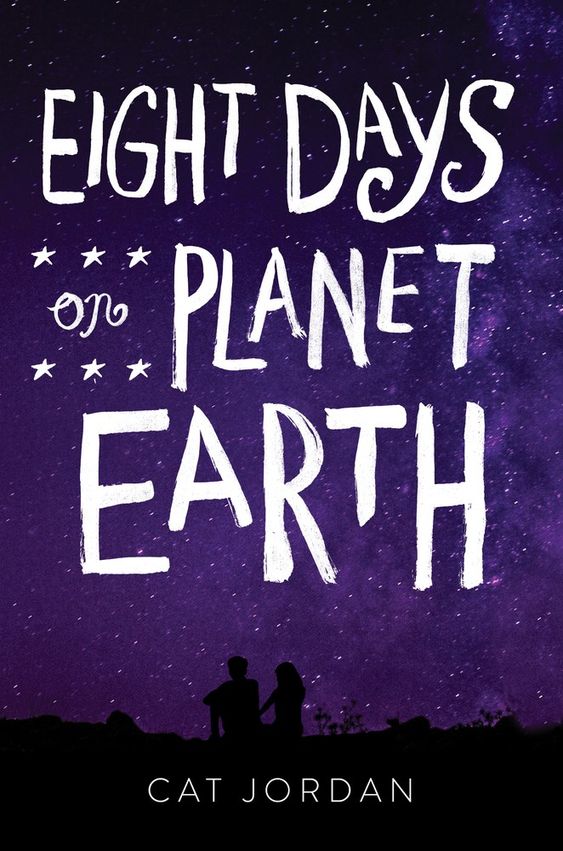 A heart-wrenching romance full of twists that are sure to bring tears to readers’ eyes, from Cat Jordan, author of The Leaving Season.

How long does it take to travel twenty light years to Earth?

How long does it take to fall in love?

To the universe, eight days is a mere blip, but to Matty Jones, it may be just enough time to change his life.

On the hot summer day Matty’s dad leaves for good, a strange girl suddenly appears in the empty field next to the Jones farm—the very field in rural Pennsylvania where a spaceship supposedly landed fifty years ago. She is uniquely beautiful, sweet, and smart, and she tells Matty she’s waiting for herspaceship to pick her up and return her to her home planet. Of course she is.

Matty has heard a million impossible UFO stories for each of his seventeen years: the conspiracy theories, the wild rumors, the crazy belief in life beyond the stars. When he was a kid, he and his dad searched the skies and studied the constellations. But all of that is behind him. Dad’s gone—but now there’s Priya. She must be crazy…right?

As Matty unravels the mystery of the girl in the field, he realizes there is far more to her than he first imagined. And if he can learn to believe in what he can’t see: the universe, aliens…love…then maybe the impossible is possible, after all.

1. What’s the opening scene?
In my earliest novels, I would start things off with a bang, often in the middle of action or even dialogue. It can be disorienting to a reader to not know what is going on or who is speaking. Some stories need this but most stories prefer a clever/beautiful/interesting opening line. I want to draw the reader into my world and I don’t want them to start off confused (unless that’s my goal!).

Now when I begin a project, I try to place myself in the new world as if I were my reader. What do I want to see? Is that interesting? Is that character compelling? Is the voice something I want to hear for three hundred pages?

2. What is the ending?
Again, as a newbie writer, I would imagine my books with a bang of an ending too. With all of these “bangs,” you’d think I was writing thrillers! However, what I discovered – both as a reader and a writer – was that I needed to know what happens after the climax of the story. Back in high school, I learned this was a “denouement” but I didn’t know how to apply it until I became a novelist.

It isn’t enough to simply end a story. I need to imagine how all the storylines connect, or don’t connect; how characters continue with their lives. Even if I don’t write it all out for the reader, I need to know what those things are.

3. Where does the story take place?
For me, place is a character. Specificity of location is critical. I might plan to fictionalize a town, as I did with Eight Days on Planet Earth, but I need to know what the exact place is that I’m fictionalizing. If I use an actual city, as I did with The Leaving Season, I need to research as much as possible if I don’t know it personally. I need to have a visual image of what the houses look like and the trees and roads. How close is the next town? Is there a body of water? And since this is a work of fiction, what isn’t there that I can fictionalize?

4. What’s the title?
I have been known to change a title ten or more times before, during and after the process of writing. However, I absolutely must have a decent working title before I even start. The title – a good one – will define the story quickly, giving it a theme without me having to force one on it. It will also stick in my head so I can be thinking and working when I’m not actually in front of a computer writing it.

5. Is it a book?
This is the most difficult question to answer. Sometimes you have an idea that seems like it’s really cool and fun or eerie or important but it’s just a character or a situation or maybe it’s just a scene or two. A book, especially a YA novel, is over 60K words! Your story idea must be sustained over the course of a lot of pages.

Also, if I haven’t written something in a while or if I’ve started and abandoned ideas for various reasons, I might be anxious to get going on a new book. No matter how excited I am to start, though, I have to live with it for a while. This is actually something I learned from Stephen King’s On Writing.

About the author:
When I was a teenager, the very first book I ever tried to write was pretentious and stilted and set in a future where there was no paper. Obviously, I fancied myself another Ray Bradbury (who I was thrilled to meet not once but twice!). The book had an awesome title and no plot but I had the most fun creating the characters and the world they lived in. That to me is the most enjoyable part of writing a novel: envisioning a world and populating it with all kinds of people and dogs. Gotta have a dog.

The worlds I create now as an adult are based on my travels from coast to coast in the US, to Europe and Mexico and Canada, and on the people I have met and loved and admired and feared. And dogs.

Currently I live in Los Angeles. With my dog.

This was an awesome guest post! I can't wait for it to come out soon!