"[A] racing, heart pounding thriller. I couldn’t put it down. It is filled with mystery and investigative work. It is excellent and written with skill. The author, Jean Rabe, has a unique voice in the mystery/thriller genre " - ChickLit Cafe, Goodreads 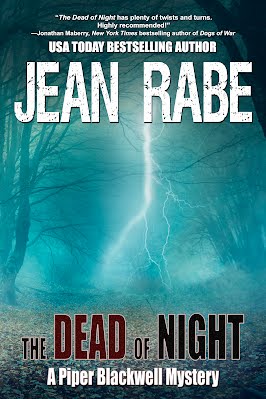 As Sheriff Piper Blackwell rushes to a clandestine meeting with an aging, paranoid veteran who believes spies are trailing his every move, she is caught in a fierce thunderstorm. Pounding rain drums against the bluff, washing away the earth and revealing a grisly secret someone tried to bury a long time ago.

Putting a name to the skeleton on the bluff, and searching for the thief who robbed the old veteran of his life’s earnings, sends Piper delving into the sleepy towns that dot her rural county. Now she’s digging into pasts perhaps best left alone.

Accompanied by Chief Deputy Oren Rosenberg, Piper seeks to expose a truth someone wants to remain forever hidden. The investigation may have started with a thunderstorm, but Piper aims to finish it and find justice. Uncovering fragments of Spencer County’s history could prove more dangerous—and deadlier—than she ever expected.

In a deceptively peaceful county, a murderer hides in plain sight…

Fifty-eight minutes into her first day on the job, twenty-three-year-old Sheriff Piper Blackwell is faced with a grisly murder—the victim artfully posed amid decorations on his lawn. Drawing on former military training, Piper must prove herself worthy of the sheriff’s badge, and that won’t be easy.

Chief Deputy Oren Rosenberg, Piper’s opponent in the recent election, doesn’t like her and wants her to fail. She doesn’t like him either, but she needs Oren to help catch the killer before another victim is discovered. Too late!

As Piper leads the manhunt, another crisis hits close to home. Her father, the previous sheriff, is fighting for his life, and she is torn between family and duty. Facing personal and professional threats, Piper has to weather a raging storm, keep the sheriff’s department from crumbling around her, and reel in a killer during the most brutal winter sleepy Spencer County, Indiana, has experienced.

About the author:
Jean Rabe is the author of thirty-eight novels, more short stories than she cares to count, and has edited magazines and anthologies. She’s new the mystery field, as her earlier works were in fantasy and science fiction. The Dead of Night is her second Piper Blackwell book, an uncozy-cozy with a big dash of police procedural thrown in. The first, The Dead of Winter, was released in 2016. Jean attends game conventions, works as a mentor for graduate-level writing students, and tosses tennis balls for her dogs in her spare time. She makes sure she has spare time for three or four toss sessions a day. You can find her website at: