"I really enjoyed the characters in this book as well as the author's quirky sense of humor. When I first read the synopsis I was expecting something like Colour of Magic - Disc world #1 but Black Blade has a style entirely its own and though there is humor in it, the humor is dark." - Lesley, Goodreads 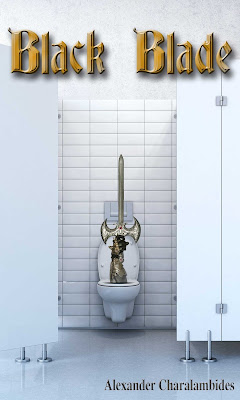 Lance is a hero.

With his friend Megan, he does his best to survive high school in a world that doesn't always make sense, and is almost never fair.

When their school receives a donation from an anonymous millionaire, Lance and Megan find themselves on an international field trip to England, where the two receive an irresistible call to a supernatural adventure that could change their destinies, and the destiny of the country, forever.

Together with three mysterious adults who all claim to be wizards, Lance must safe-guard the legendary Excalibur. Traveling into a strange parallel world and keeping his friends, new and old, safe from harm at the hands of a malevolent army of magical soldiers, Lance discovers the truth about heroism and the content of his character.

Books are amazing things because you don’t need to cast anyone. It’s one of the things that’s always stood out to me as important about the medium. Because of that, I don’t usually detail my characters or “cast” them, and when details about their personal appearances come up it’s always because they’re relevant to what’s happening in the story. I want to preserve the freedom of anyone to imagine any of my characters to be as much like or unlike them as they want.

That said, I understand why people like to talk about their “dream casts”. It’s a fantasy probably every author has shared at one point or another, sitting down and talking to a casting director about who they can get for the movie adaption, why you want who you want and why they’d be perfect.

Unfortunately, because of the approach I take to how characters look, and because I want my readers to have as much freedom as possible imagining them, I never “cast” anyone I write about, but I can talk about some influences particular performances have had on my decisions about those characters.

The clearest influence I can trace is for Lance, an adolescent malcontent and Black Blade’s “hero”. He whines, he judges, and he is a haver of wrong opinions. I’m sure you’re picturing him already, but I drew a lot on Shia Labeouf for this character, particularly his roles in all the Transformers movies. Please forgive me.

Next are the wizards (spoiler warning: there are wizards in this book), and they’re much harder to pin down to any specific actors. It’s essential that they are aloof, condescending (and in one case very angry), but I have a heard time narrowing their casting beyond the traditional stable of Very Serious British actors.

Last is Megan. Black Blade is driven by an obligation that forces the characters on a supernatural journey. If you think of the story of the book as the story of this quest, Megan is peripheral, or even irrelevant.

She’s really small, almost never confrontational, and almost never takes the initiative. She is (as far as I’m concerned) by far the most important character. Why haven’t I mentioned a cast yet, you might be asking?

The answer is the most important reason that we keep writing books: I’ve never seen an actress cast that would be appropriate for her, and there probably isn’t one for the simple reason that no executive or casting director would employ someone so “ordinary”.

We can write about whoever we want, people who could never be represented by any actor. Without that willingness to write about ugly, strange, ordinary people, we cripple ourselves creatively, so when you think about your “dream cast” while writing, please don’t forget that not all people are actors.

About the author:
Alexander Charalambides was born in London and grew up in Berkshire.
He studied Creative Writing, and graduated from the Open University.
In 2008 he moved to the United States, and now lives in New Hampshire.
As a freelance writer Alexander enjoys storytelling just as much as editing and analysis, but often takes time off to enjoy wind surfing, do the sickest of motorcycle flips, wrestle with deadly animals and lie about his hobbies.

That cover is a hoot!

Black Blade sounds like a great adventure. Thank you

Congrats on the release and thanks for the chance to win :)

This sounds like a great read! Can't wait to check it out!

I love the retellings and this book seems like a really good story!

Excellent guest post! This book sounds like a very interesting read! Looking forward to checking it out!

Love the book cover! The characters sound good and this sounds like really good adventure!

Oh this sounds so good! I cannot wait to read and follow Lance and Megan on their journey!

Your book looks like something I would love to read.