To the Breaking Point… Maski: Broken But Not Dead by Joylene Nowell Butler

"This is a novel that is as complex in its plot as it is in its character development. Much is kept uncertain by the clever use of an unreliable narrator. The reader is led along false routes and into dead ends. Relationships develop over the course of the story as it examines the nature of friendship, marriage, parenthood and familial ties. There is illuminating insight into the concerns and nature of powerful politicians, which struck me as remarkably intuitive. " - about Motowak - Stuart, Goodreads 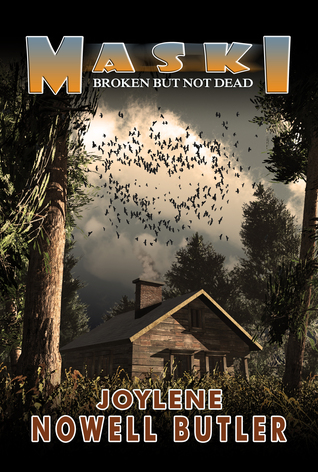 To the Breaking Point…

When Brendell Meshango resigns from her university professor position and retreats to her isolated cabin to repair her psyche, she is confronted by a masked intruder. His racial comments lead her to believe she is the solitary victim of a hate crime.

However, is all as it appears? After two bizarre days, the intruder mysteriously disappears but continues to play mind games with her. Taught by her mother to distrust the mainstream-based power structures, and with her stalker possibly linked to a high level of government, Brendell conceals the incident from the police. But will her silence keep her safe?
Then her beloved daughter, Zoë, is threatened and Brendell takes matters into her own hands. To save Zoë, Brendell searches for the stalker and confronts not just a depraved madman but her own fears and prejudices. A murder enveloped in pain and mystery…

When Canada’s retired Minister of National Defense, Leland Warner, is murdered in his home, the case is handed to Corporal Danny Killian, an aboriginal man tortured by his wife’s unsolved murder. The suspect, 60-year-old Sally Warner, still grieves for the loss of her two sons, dead in a suicide/murder eighteen months earlier. Confused and damaged, she sees in Corporal Killian a friend sympathetic to her grief and suffering and wants more than anything to trust him.
Danny finds himself with a difficult choice-indict his prime suspect, the dead minister’s horribly abused wife or find a way to protect her and risk demotion. Or worse, transfer away from the scene of his wife’s murder and the guilt that haunts him…

The audio version of Mâtowak: Woman Who Cries is available through Audible and Amazon. Click on the links to hear an audio sample of the book.

GUEST POST
Plotting a Crime – What an author should not do

I've always believed I owe it to my readers (and myself) to write the best story I can possible write. It's the reason I don't pen a historical novel, or a S/F, or a romance, but instead write thrillers. I stick to what I know.

What I know is research is an essential tool. Without research I risk leaving authenticity and integrity out of my story.

In my suspense thriller Maski: Broken But Not Dead, my protagonist is Metis. I am Metis. She's an English professor. I majored in English at SFU. I've taught creative writing. I've interviewed English professors.

In Matowak: Woman Who Cries, my protagonist, an indigenous man from the Haida Nation, is a sergeant in the RCMP. I am not, nor have I ever a member of the Royal Canadian Mounted Police. But—I've interviewed three: a family member, a neighbour, and a friend. I've interviewed a lawyer and a crown prosecutor. I've also studied the Criminal Code and the Canadian Charter of Rights and Freedoms.

If you enjoy mystery/police/crime stories, then you already know what's required. You must recognize the basics of fiction writing, how to narrate, create suspense, heighten tension. But you also need to establish credibility. And if you do that, win the trust of your readers, you'll be blessed with sales, and readers who ask, "When's your next book release?"

About the author:
Joylene, Métis, is the author of Dead Witness, Broken But Not Dead, and Break Time. She and her husband and their two cats reside in Canada for the summers and Nayarit, Mexico, for the winters. They believe life should be an adventure.
For more on Joylene and her writing, visit her:

Website ** Blog **  Goodreads ** Facebook ** Twitter
Author's Giveaway
a Rafflecopter giveaway
Thanks for stopping by today.
Does it bother you to read books out of order even if they are standalones and can be read that way?

Joylene, great tips. When an author doesn't know the topic they are writing about or doesn't do extensive research it can make a huge difference in the quality of the story. Thanks for sharing Joylene's stories and for being a part of her tour.

Thank you for hosting me today and featuring my work today. Have a great day.

I will go right here and use all these links. We can discuss all her books later. I am a huge fan.