One nation, without God... - THE REMNANT by William Michael Davidson

"This is such a great novel and love the idea that the government would attempt to find a way to reprogram the human brain in an attempt to stop the need for faith. A great futuristic novel that is guaranteed to make you think twice about the governments involvement in our own religious freedoms we take for granted far too often!" - Kathleen, Goodreads One nation, without God...

Colton Pierce apprehends Abberants—those who display symptoms of faith—and quarantines them on a remote island to ensure public safety. Years prior, the government released a genetically-engineered super flu that destroyed the genes believed to be the biological source of spiritual experience in an effort to rid the world of terrorism. As an extractor with the Center for Theological Control, Colton is dedicated to the cause.

But Colton's steadfast commitment is challenged when he learns his own son has been targeted for extraction. An underground militia, the Remnant, agrees to help Colton save his son in exchange for his assistance with their plan to free the Aberrants on the island.

Colton is faced with the most important decision of his life. Remain faithful to the CTC? Or give up everything to save his son?

GUEST POST
XXI Century – Religion, do we still need it?
(about what it is or should be one’s religion)

This is a complicated question to answer in a brief post, but I'll do my best. The question is really dependent on what your definition of "religion" is. I think that is a very stiff, unwieldy kind of word that makes my initial response a simple no. If being religious means my purpose in life is following rules, doing rituals, and trying to do all of these outward of kinds of things to find peace and draw close to God, then I think history has showed us that doesn't work. I don't think that's what we need. I don't think that's what humanity has ever needed.

I'm a Christian, and I think it's important to note that I haven't always been a Christian. I was quite opposed to Christianity when I was younger. I laughed at it, thought it was stupid, thought it was for the weak-minded, and loved debating people about how Christianity was completely backwards and foolish. Nowadays when I get in a discussion about my faith with others and when I see that they're skeptical, I remind them that "I've been there."

Unlike religion, I think what we do need in the twenty-first century is redemption. We have always needed redemption. At the most basic level, I think people will acknowledge (whether atheist or Christian) that as we look back at our lives we recognize that we have made mistakes, we have made poor decisions, and (if we are brutally honest with ourselves) we fall short of our own expectations. I'm not suggesting that we are all murderers and rapists, but in our heart-of-hearts I think most can acknowledge that we carry within us a great brokenness and yearning to be more than what we are. The Christian faith simply acknowledges this truth. But more than a religion or a set of rules or some religious dogma, it gives us a solution: a Savior. We need a savior. Not philosophy. Not intellectualism. Just a savior.

Society will never grow beyond the need for this, in my opinion. As society advances, it's easy to lose these kinds of ideas in all of the noise. We sit with our iPods and our iPhones, our tablets and our computers, immersed in our careers and our agendas, but it doesn't change who we are and what we are desperately in need of. I think today's society just makes it easy to be distracted and to keep our eyes off what's the most important.

We're a blip on the map. A vapor. Here today. Gone tomorrow.

But in our hearts, we know we were made for more than just this. That's not a coincidence. And it's not some mythical DNA strand telling us what to think.

That's an invitation. And it's one worth responding to. 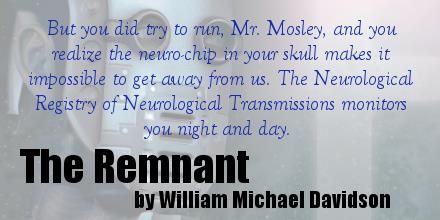 About the author:
William Michael Davidson lives in Long Beach, California with his wife and two daughters. A believer that "good living produces good writing," Davidson writes early in the morning so he can get outside, exercise, spend time with people, and experience as much as possible.

A writer of speculative fiction, he enjoys stories that deal with humanity's inherent need for redemption.

For more on Davidson and his writing, connect with him on: Fascinating topic. Makes one stop and ponder the possibilities. Thanks for being a part of William's tour.

Amen, William. We all want to be more. And we desperately need redemption.
Religion is from man. Relationship is from God. I'll take the latter.

Thanks so much for posting!

Sounds good! Thanks for hosting.

I almost want to live in the world created by this book. Our country is being led by someone who thinks they are a savior but who isn't. I'd like to escape by reading this book :)