The House at the End of the Street (Swallows Fall, #5) by Jennie Jones

Gemma Munroe loves hard, laughs hard and plays hard. Or at least she did before today. Her dream is finally within her grasp – owning the toy shop in Swallow’s Fall and establishing herself permanently. Only one person has the power to get in her way: 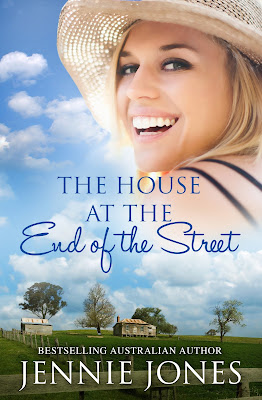 Gemma Munroe loves hard, laughs hard and plays hard. Or at least she did before today. Her dream is finally within her grasp – owning the toy shop in Swallow’s Fall and establishing herself permanently. Only one person has the power to get in her way: Josh Rutherford – the love of her life who kissed her and left her ten years ago is coming home.

Josh will be in town for five days. Only five days. He’ll finally sever the ties to a youth filled with poverty by selling the properties that are now his. He’s returning healthy, wealthy and emotionally stable, and then he’ll leave forever. It’s all in the plan. Everything…except for Gem. He never forgot her, but he definitely forgot the effect she has on him. Now she’s got problems, and he can’t seem to leave without trying to help her solve them.

The town itself also has its own plans: Gemma and Josh are thrown together in Speed-Date fiascos, kissing experiments, bar fights and an issue with the North Star – Josh’s compass and the road to his next adventure. Seven weeks later Josh is still in town. Gem has to get through her best friends’ wedding and Josh has to get over Gem. Because he’s not staying. Is he?

‘I was hoping we could have our business chat.’

’Oh, business.’ Gem fiddled with her large hoop earrings. Beneath her fleece-lined jacket she wore a thick white V-necked T-shirt and she’d been warm enough for the winter cold, but now she felt hot—and a little bothered.

‘I was wondering—what your position is,’ Josh said. ‘And if you needed help in some way. I mean—are you in a position to make the purchase?’

No, but she wasn’t going to let Josh know that. ‘I wouldn’t mind a week or two to gets things finalised.’

‘No problem. And what about the flat above? Are you intending to live in it?’

‘Of course. Where else would I live?’

‘I’ve got a place in mind. A five minute walk out of town.’

‘What place?’ she asked, frowning.

He shook his head. ‘Maybe later. Let’s stick to the shop for the moment.’

‘Actually,’ she said, ‘I am a little busy. Can we have this chat tomorrow?’

Josh looked up at the wall art.

Gem had created history with her mural of the town, but she couldn’t tell from Josh’s expression what he was thinking.

‘It’s not graffiti,’ she said. ‘Don’t utter that word unless you top it with “art”.’

‘I wasn’t about to say anything except … it’s stunning. It’s got flair. And charm.’ He looked her up and down then grinned. ‘Bit like you. When you’re not covering up whatever it is that’s bothering you with your temper.’

About the author:
Bestselling author Jennie Jones loves writing rich, warm-hearted and refreshing stories of adventures of the heart. She’s a self-confessed would-be small town country girl and longs for the day when she and her family can set up home in a cute country cottage in the middle of a huge field. Until then, Jennie is enjoying life a five minute walk from the beach. She can hear the ocean as she types her stories.

Thank you for hosting this blog post and giveaway Mythical Books! Jennie x

Hope you enjoy if you get a chance to read it Stephanie!

Sounds like a good book for relationships, to read :)

I can't wait to read this book. I liked both the excerpt, and the book cover.

Thanks for the intro to a new author and series for me to read!