friendship, knowledge, and truth - The Lightbound Saga by S.G. Basu

From Goodreads: "I wrapped myself up in the building complexity of this story and didn’t want it to end. After the new twist of clues and information offered during the ending pages of this book, I will find it hard to wait for the next installment. Overall a very fun and captivating read. Really a unique series too in that it blends elements of hard sci-fi in an accessible YA format. " 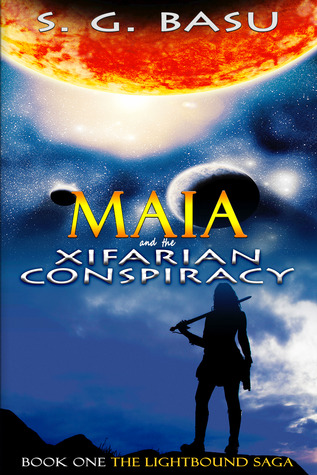 The chance of living the life of a regular thirteen year old was never hers, Maia knows that much. Her dead mother is an alleged turncoat; her people are practically slaves to the Xifarians-a race of ruthless, space travelers; her planet is near extinction. Maia keeps hoping, however. Of evading the Xifarians and of someday atoning for the sins of her mother. Maia has learnt to be careful, she is cautious. Until the day she gives in to the charms of a gypsy boy and the allure of flying his glider. And then, all Maia’s plans fall apart.

Spotted by Xifarian scouts, Maia is recruited into a dubious peace initiative. She had never considered visiting the galaxy roving planet-spaceship of Xif; she had never imagined meeting or befriending a Jjord – the reclusive people from the under-ocean colonies. But all that is about to happen, and Maia’s life is about to change forever . . .

Maia and the Xifarian Conspiracy is a daring space adventure and a coming-of-age story. It is a riveting tale in which the young hero’s journey of self-discovery parallels the timeless search for friendship, knowledge, and truth. 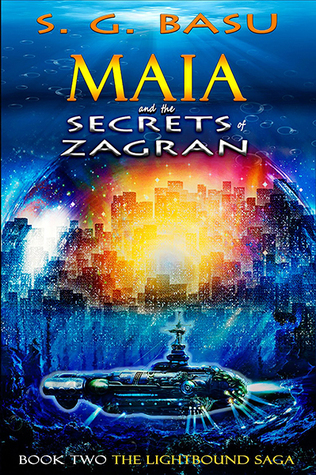 Thirteen-year-old Maia thinks she has seen it all.

She has survived an assassination attempt, she has been threatened by a chancellor, and she has faced off with saboteurs trying to bring down a nation. She lets nothing get to her anymore-not the ominous nightmares she has been having lately, not the fear of being targeted for another soul extraction, not even the memories of her dead mother’s terrifying communique.

More than ever, Maia wants the Initiative to resume. She longs to visit Zagran-the undersea capital of the Jjord. She wants to ride the underwater transport lines, learn about the Jjordic energy farms and most of all-she wants to goof off with her friends. But, around the charming city of Zagran, evil is gathering. Maia and her friends do not know it yet, this is just the beginning of a terrifying end.


"A mystery of magnificent proportions unfold in the titular city of Zagran. Once again, as in the first book of the series, I was fascinated by the vivid imagery and the scientific premises. The surface problem is engaging, but the series wide arc about Maia's mother continues to intrigue equally well. In this book we also see more of the supporting characters and see their stories unfold. It was a very satisfying and fun read. In short, this is a great YA epic fantasy." - Amazon

About the author:
S. G. Basu is a telecommunications engineer by profession, but she likes to call herself a dreamer. Imagination, fueled by a voracious appetite for books, has been her steady friend since childhood. She discovered her passion for writing quite by chance and there has been no stopping her since then.

I love love the cover of your book!!! And of course the excerpt and would love to read it, but the cover is what first caught my eye. so I would love to get my paws on this book!! Thanks so much for the giveaway