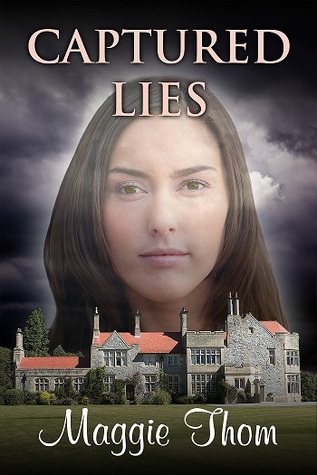 She was kidnapped not once but twice and now someone wants her dead because of it....
Her life was a lie!

Bailey knew her upbringing wasn’t normal but she’s worked hard to stabilize her life. At 29, she finally has a good business, a stable home; her life is miles from that of her childhood. Then suddenly her mother dies, leaving a gaping hole and a discovery that they may not even be related. If Guy, the private investigator is to be believed, her life is a lie. Using the skills she learned on the streets, Bailey travels back through a sketchy and dangerous past, to find answers. Dodging bullets, staying ahead of those who want her dead and convincing Guy she can do it alone, are making it difficult to discover not only the secrets of her mother’s past but that of a family claiming she is theirs.

Everyone seems to have a story... but who’s telling the truth? And who wants her dead? Is Guy part of the solution? Or part of the problem? To discover the facts, she’ll have to untangle a web of deceit, lies, and secrets, dating back over thirty years.

What do you think about our day suspense/thriller literature and where Captured Lies fits?
I love to read suspense/thrillers. When you really stop to think about this genre it is about tough subjects - death, murder, kidnapping, hijacking, etc. I love that it really is a huge category, there are so many different types of suspense/thrillers but each will take you on an intense, suspenseful, thrilling ride. Some in this genre are very graphic, explicitly giving you all the gory details so you can vividly see it and some don't give so much detail but will give you enough information so you get a sense of what has occurred, so you can clearly imagine it but don't have to read all the details. Each are very powerful and will appeal to different readers.

Captured Lies does talk about some tough subjects but none of it is really graphic. You will get enough information so you get a clear picture of what is or has happened and you will feel the anxiety, the adrenaline rush, the intensity of the situation. Captured Lies also has many twists and turns to keep you guessing as to who, how and why the bad guy is doing what he's doing. I have received many compliments that Captured Lies is a fist-clenching, edge-of-your-seat, white-knuckle-grip, kind of book. That, too me, is what a suspense/thriller is all about.

What knowledge should a suspense/thriller writer have and how free can they be with their imagination?
A good suspense/thriller means that there is a lot going on. There are some detours along the way that make you wonder and to mislead you, there are a number of characters that you'll meet - who's good, who's bad - and as you read through, the tension will build and the story will become more complicated with each page you turn.

A suspense/thriller writer needs to know how to put the twists, the misleading paths, the engaging characters and how to stack all of this so that it is continually building the suspense. It's about using these qualities to keep the reader glued to the book to find out what's going to happen next. The writer can include anything, really, that they can imagine. The only stumbling block is to make sure that whatever they are writing about they are giving enough information as to how it is possible, to make it believable.

I saw that some of your reviewers said that Captured Lies has a bit of humor and romance. What is the role of the humor in a suspense/thriller story and/or why did you use it?
I think that humor is so important in life, we get so caught up in all that's bad and wrong and we get stuck there. I think humor is a great way to take away some of the power that negative things have in our life and give us a new way of looking at it. In Captured Lies, the story is quite intense, Bailey is not only trying to find answers to 30 year old lies and secrets but she's running for her life. She really hasn't much in her life to laugh or even smile about. Having humor in the story was a way to really bring out Guy's personality but to also open up Bailey's. To grow and change we have to be able to look at things differently and I think that's where humor helps, even in a story.

The book description starts with “She was kidnapped not once but twice and now someone wants her dead because of it....”. What does it take to create a believable story?
I think that anything can be made to be believable if you give enough information as to how it can be. Sometimes as writers though, we do push that boundary of believable if it fits the story line and helps to propel the story forward. What really makes a story believable are the frustrations, the emotions, the everyday life stuff, the journey, the obstacles that people have to overcome, how they handle it, what they do, to get out of the situation they are in. they are what the readers can really relate to. You want to connect your reader with your characters so that they feel like they are right there with them, through each step they take. If you can do that as a writer, you can pretty much take them anywhere and make it believable.

What will readers not find in a book written by you?
Great question. I'm not sure. I'm pretty open about who I am, who I was - someone who truly didn't believe in myself or my writing but I won't bore you with those details as you'll be able to read them in the book about me. J Maybe something that wouldn't be included was how clutzy I was. Oh the stories I could tell - they are quite funny now but they weren't at the time. I have always been a very strong, independent, do-it-myself kind of person, which I still am but I am also a very different person than I was ten years ago. I see myself very differently, so much more positively. I am following my dream. I love where I'm at, who I am and where I'm going. J

Maggie Thom took the challenge and leapt off, leaving a full time twenty year career in management, to write full time. After her initial panic that she might need a straight jacket, she published her first book Captured Lies, October 2012. And now is excited to release her second novel, Tainted Waters, April, 2013. Her third book, Deceitful Truths (sequel to Captured Lies) available fall of 2013. An avid reader and writer her whole life, she decided to break the monotony of wishing to be an author by making it happen. Married to her best friend, she is learning that humor, love and patience help her navigate her way through her twins’ teen years.

Her motto: Escape to read and Read to escape. "Maggie Thom writes a fast paced thriller laced with romance that keeps the reader interested and on edge!" InDtale Magazine.

Wow this book sounds great! Thanks for the amazing review, and the recommendation.

Thank you so much for hosting me and my interview. I really enjoyed doing it. I appreciate your support. :)

Yay Sam, so glad you think it sounds great. I'd love to hear what you think when you get a chance to read it. Thank you for stopping by.

thanks for the giveaway! :D

Thank you Gaelicark, I'm a little biased but I like it too. :) Thank you for stopping by Gaelicark and sandbook

love the cover and thanks for the chance!!

book looks really good!! thank you for the giveaway too!!

I love the cover art, that mansion especially...I'm an architecture nerd so of course I wish I could see the blueprints! (When I really love a book I'm reading, I tend to sketch out floor plans of the various home environments described in the book. As a kid I did much the same thing, only I went a step further and build them with LEGO bricks.)

Sounds wonderful, thank you for the chance!

awesome interview! thanks for sharing your work!