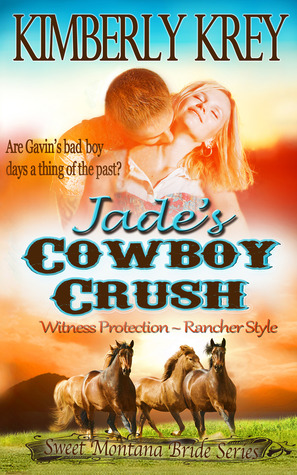 Single mother, Jade Miller, has just witnessed a murder. Now, set to testify against the cold-blooded killer, Jade must be placed under protection. While she is grateful to the kind folks who've offered to take in her and her son, Jade is surprised to find the man escorting them from L.A. to Montana is Gavin Emerson. A womanizing, far-too-attractive-for-his-own-good, rebel cowboy. Jade assures Gavin that she has sworn off men until her son is grown, but all too soon she finds herself fighting back feelings for the man who's agreed to care for them.

Gavin wants nothing to do with ranch life. Not since the ugly fallout he had with his father over eight years ago. But when he agrees to come back, harboring Jade and her son for a time, Gavin falls in love with life on the land once again. Above that, he finds his heart has been captured by his lovely house guest, Jade Miller.

After reservations on both parts, the two are finally ready to open up and give their new-found love a try. Only they aren't in the clear just yet, and as a dark and deadly threat falls upon them, Gavin finds that his bad-boy past may have led the danger right to their door.

Note: Though this novel is considered clean romance, it does contain passionate kissing scenes and a few mild curse words.

Jade Miller rocks. She really does. She’s a single mom who’s learned how to prioritize and put four-year-old Luke, whom she calls Skywalker, first.

In starting this post, I decided to spotlight just one more single parent. A father from movie, The Holiday, who I think relates to Jade. A recent article by Parenting highlights Eleven Movies About Single Parent Families. The Holiday is listed among these flicks. (HERE)

Here’s what they have to say about why they love it: “Jude Law plays Graham, a widower and father of two young girls. He falls madly in love with Amanda (Diaz) but fails to tell her he has children (obvs, not cool). When she shows up unannounced at his door, she meets his darling daughters and wants to know why he lied about being a dad. Any single parent contemplating getting into a relationship can relate to his answer: “Until I get to know someone really well, it's easier for me to be a normal single guy, because it's way too complicated to be who I really am. I'm a full-time dad. I'm a working parent. I'm a mother and a father…I have no idea how to date and be this. And I suppose there's the possibility I'm afraid of what another person might do to who we are and how we get from one day to the next.” ‘Parenting’ goes on to admit they also love the show for the “Jude Law eye candy” but we’ll save that for another post. ;)

While Jade Miller is a far cry from a widower with two daughters, she, like this character, wasn’t exactly forthcoming about having a child when she first met Gavin. Still, she is a mother first and foremost who puts Luke above all else. In fact, she’s decided to put her dating life on hold until Luke is fully grown. That is, until she falls in love with Gavin.

Here’s a few facts about Jade Miller:
She has strawberry blond hair, pale skin, and a splash of freckles she’d do anything to hide.
She dunks almost everything she eats in Tabasco sauce.
She’s fiercely protective when it comes to her son.
She lost her loving father to a long battle with cancer when she was young.
She’s secretly in love with cowboys from the past, like Wyatt Earp.
She is snarky, witty, and avoids drama like the plague.
She’s just witnessed the murder of a co-worker and is about to enter a protection program on Emerson Ranch.

Oh yeah, and she’s about to fall hard for rebel cowboy, Gavin Emerson.

In this excerpt from Jade’s Cowboy Crush, Jade, upon butting heads with Gavin, reconsiders her plan to seek protection at Emerson Ranch:

Jade had assumed that a grown, mature man would show up to take her and Luke to some secret hideaway. Instead she’d ended up with an immature, kid-hating, woman-ogling dirt bag. Probably back there hitting on that female cop. Yet as she glanced up to her rearview once more, puzzling as to why she couldn’t see him, two loud thumps tapped at her window. She jerked back in response before rolling it down partway. “What,” she demanded, glaring at him. Or rather – his chest. He was taller than she’d realized. And more muscled too. And there were those tattoos, the near-sleeve of them encasing one well-defined arm. She’d been drawn to that look back in the day. Not any more. With a slow, relaxed movement, he hunched down to look at her. “What are you doin’?” The slow drawl in his low, raspy voice made her blush and actually wonder just what the hell she was doing. His thick, blond hair bordered on unkempt in a way that might make a weaker woman swoon. But she was not a weak woman. Jade didn’t fall for things like that. “I’m leaving,” she announced.

There are plenty of admirable single parents out there in real life and other. Do you have a favorite from TV, a movie, or from a book you read recently? Be sure to share in the comments below.


Twenty-four-year-old Cassie Lovell has a great job, good friends, and an apartment with a killer view. That is, until life is turned upside down. Without the chance to say goodbye, Cassie is forced into a witness protection program on Emerson Ranch. Just when she fears life is doomed, Cassie meets Shane Emerson, the stunningly handsome cowboy who’ll be posing as her newlywed groom.

Shane Emerson is determined not to fall for the woman he’s agreed to harbor. Especially since the whole thing was his family’s way of trying to get him hitched. So why is it when he takes Cassie into his home, Shane wants nothing more than to turn their make-believe marriage into more than just a sham?

In a moment of weakness, Shane steals a kiss.
In return, Cassie steals his heart.
Yet before they confess their undying love,
a hidden danger threatens to tear them apart.

7th January - Mythical Books - Jade Miller, Single Mother
Jade had assumed that a grown, mature man would show up to take her and Luke to some secret hideaway. Instead she'd ended up with an immature, kid-hating, woman-ogling dirt bag.

8th January - I Am a Reader, Not a Writer - Smokin' Hot Pizza Bomb
Jade is just the type of mom who would look for fun ways to spice up the norm, so I knew this dish would be just right for her.

I'm a writer of contemporary clean romance, a lover of home, family, & friends, & the ultimate hater of laundry.


A few of my favorite things: Diet Coke, Cafe Rio, and novels by Marcia Lynn McClure.

I do not go anywhere without: SoftLips Chapstick and Altoids Smalls.

Must be 18 to enter and able to receive winnings. See Rafflecopter for detailed restrictions.
a Rafflecopter giveaway

This book is amazing! Thanks for this giveaway ♥

MY first words would be: Love At A Glance. Thanks for the giveaway

The very first kiss of the guy I have dated awhile back.

The very first kiss of the guy I have dated awhile back.

Thank you very much for this awsome giveaway!

Feeling so romantic at the moment..

Thanks for this giveaway! :D

Thanks for being on the tour, Cremona!

Good luck to all of you in the giveaway! A big thanks to Mythical Books for posting with the tour; what an awesome blogspot you have with such an impressive following!

My fiance' and I dancing to *Otome no Policy*.

Butterflies in the stomach and feels. ^_^

My first thought is small things my husband does even when he is a sleep and I come to bed he always rolls over and rubs the same spot on me and I find that really romantic. Thank you for the great giveaway.

When my husband proposed me 5 years ago :)

I think holding hands looking into each others eyes. Thanks so much for sharing this Amazing giveaway! & Happy Reading! :)