will leave you spellbound - From the Sky & Equinox (Beyond Moondust Trilogy #1&2) by J.E. Niccasio

"The emotion and character depth in this book is wonderful, I was engaged with the characters from page one. There is just enough action, suspense, romance, and even a little conspiracy theory, because you can't have a novel with aliens without a little crazy conspiracy. Not to mention the relationship between Lucien and Sam, which I absolutely adored. What can I say? I'm a sucker for romance." - Rebecca, Goodreads 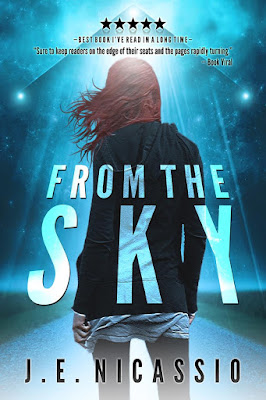 From the Sky from best-selling author J.E. Nicassio writes the kind of close encounter that will leave readers spellbound.

When high school junior, Samantha Hunter, and her father move to New Mexico, it’s a chance to leave tragedy behind and start over. However, the arrival of a dark-haired stranger changes everything. Lucien introduces Sam to the prospect of enjoying life again, and to the hidden world of aliens. But crazier than that, Lucien doesn’t feel entirely like a stranger. Redemption and romance follow Sam in her new life as she works to understand the alien-human romance she’s developing—a romance that feels beyond her control. There’s something bigger happening around her, and to her, too, and this is just the beginning….

—J. E. Nicassio packs in the action like a superhero movie— From the Sky has all the hallmarks of a Hollywood blockbuster—ready to light up the sky like a fleet of UFOs. “A must read! It had me from the very beginning to the last word. Every page had a plot twist and turn to make my imagination run wild.” —Online Book Club.org 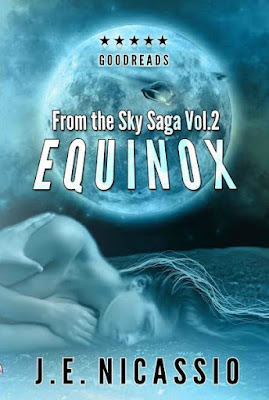 "Two possibilities exist: either we are alone in the universe, or we are not. Both are equally terrifying.” Author C. Clarke.

From the Sky Saga Continues! The day after the winter solstice, Samantha Hunter is found naked and bleeding in a remote cabin in the Sandia Mountains of New Mexico. As Sam works to understand what’s happened to her, she is whisked into the Underground—a secret community of scientists, civilians, and aliens that are connected to her story and to the alien boy she’s in love with—Lucien. This is where the fight begins, and Sam must decide what price she’s willing to pay for life and love.

“Equinox gives the reader a totally different way of thinking about extraterrestrials. Anyone with interest in the possibility of life outside this planet—and for those who love a great romance—this book for you. It is exceptionally written and will leave you wanting more!” —Kelly Fait Goodreads
“American teenagers have to grow up fast because dark forces are out to get them—J.E. Nicassio gives us a fast-paced and exciting tale full of car chases, close calls, and the angst of star-crossed love. Teens and even older readers will love From the Sky." —Ray Simmons for Readers' Favorite

I’m not sure how I ended up there, but there I was. I used to be a normal teenage girl, worrying about boys, my looks—you name it. My life was changed forever by the intrepid, dark-haired stranger who saved me. Lucien Foster was that stranger. He was not the average, teenage boy. He was special, to say the least. He had remarkable, snowy-diamond eyes that could see into my mind and read every thought. Lucien Foster possessed certain abilities that, if known, would endanger his life—supernatural abilities. The funny thing about all this was he was an alien from a planet, billions of light-years away from Earth, and I fell in love with him. I know what you’re thinking, this girl is a nutcase. They need to lock her up and throw away the key. However, what I say is true; my boyfriend was not from this world.

At the time all of this transpired, the day after the Christmas solstice, I didn’t think my life could get more complicated than it already was. I had no idea what I was getting myself into that fateful night on a mountainside in New Mexico. Boy, did things go wrong.

About the author:
J. E. is the bestselling author of the From The Sky series and was listed as one of the top 1000 authors on Amazon in 2015, and was Amazon all-star top ten-holiday children books for Rocky: The Rockefeller Christmas in 2016. She is a freelance writer and MUFON (Mutual UFO Network) Field Investigator in Pittsburgh, PA where she resides with her mother, two sons, and German Shepherd Ava. She loves writing and is passionate about creating stories that entertain and comes straight from the heart. Her Children’s book, Rocky (About Rockefeller Center and a tiny Christmas tree named Rocky) made the Amazon Top Ten Christmas Book List in 2016.


AUTHOR's GIVEAWAY on AMAZON
Posted by CCAM at 3:30 PM