The only way to hunt down a killer is to become one… 37 Hours (Nadia Laksheva Spy Thriller #2) by J.F. Kirwan, Barry Kirwan

"The book is intensely action packed. It’s filled with twists and turns, and red-herrings, and had my heart racing for most of it. There are also some kick arse characters, Nadia and Lorne, two females, at the forefront, proving that spy thrillers work just as well with women leading the way"
Whispering Stories, Goodreads 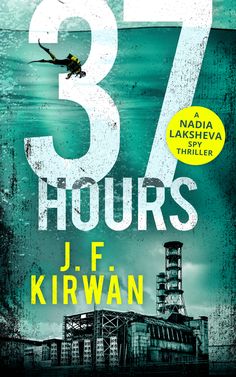 Imprisoned by MI6 for two long years in solitary, Nadia suddenly finds herself free again. But there is a price to pay for her release. Another dangerous and near impossible mission – retrieve the Russian nuclear warhead stolen by her old nemesis, the deadliest of terrorists.

But he is always one step ahead, and soon Nadia finds herself at the front line of preventing London from disappearing into a cloud of ash. Only this time, she is ready to pull the trigger at any cost.

And with the clock counting down from 37 hours, time is running out…

"The tension is high throughout. It only took me about a quarter of the book to realise I was completely gripped. [...]
37 Hours is an enjoyable read. Fast-paced with the tension increasing as the story unfolds, this is a great spy thriller. I want to go back and read the first, but knowing the final destination of the characters might undermine their journey in the prequel. One thing is for sure: Kirwan is a talented author!"- Lindsay, Goodreads Nadia heard the familiar rattles and clanks down the corridor. Steel bar gates unlocked, opened, locked again. Distant footsteps. Coming her way. She stopped her third round of push-ups and sat back on the wooden bench in the cell she’d barely left in almost two years. No visitors, no phone calls, no internet, no television, no papers. Books occasionally, classics. Minimal human contact.
They kept her in the dark, because they still weren’t convinced she’d given up all her secrets, and had classified her ‘need to know’ status as zero. They kept her hidden, afraid she’d talk about the Rose, and shame the British government over what it had created and almost let loose on its own kingdom. Afraid she’d let the public know they’d narrowly dodged a nuclear war with Russia. The government could invoke plausible deniability. Just another foiled conspiracy. But it wasn’t over. Cheng Yi was dead, but the unknown client was still out there. The threat was still real.
He would try again.
Maybe they’d keep her there for good. She’d killed two people. The world was better off without them, but British justice took a dim view of unlawful killing. British justice… She’d not seen a lawyer, nor been charged as far as she was aware. No visitors. She tried not to reopen that particular can of tarantulas; it never helped.
In the first six months, the thought of someone visiting her, Jake, maybe, or Katya, kept her going. But after a year the pain became unbearable. Nobody came. Nobody cared. And so she worked out, she read, and the rest were just bodily functions. She often sang the Cossack lullaby before lights out, just to practise using her voice, and to reach out to her older sister who used to sing it to her when they were young, soothing her while their parents screamed at each other downstairs. Nadia prayed Katya was all right, and comforted herself that above all, Katya was a survivor.
The sounds drew nearer, the telltale rattle of iron keys on a large ring. She knew the routine. She wiped sweat from her forehead with a mouldy towel, and stood to attention at the end of her cot, next to the washbasin. No mirror, no glass anywhere, a metal sink and lavatory in the corner. Light filtered through the misted glass and steel bars. She faced the solid metal door. Maybe she’d get coffee today. It would be cold, but that didn’t matter.
Footsteps grew closer. Two sets, not one. Another routine medical inspection? There hadn’t been an interrogation for months. Jake’s ice-bitch ex-lover and current boss, Lorne, had come regularly in the first nine months, until she could extract nothing new. Initially Nadia had played tough, until Lorne showed her photos of Ben’s funeral – the man who had helped her so much in the Scillies, yet asked for nothing in return – whereupon she’d cracked and told Jake’s MI6 handler everything she knew.
Lorne informed Nadia she would receive no visitors, because no one knew where she was: some British military high-security facility. Probably not even on the books. Nadia doubted anyone would visit even if they did know, after what had happened back in the Isles of Scilly. Unless it was to spit in her face, something she’d welcome after two years of solitary. But Jake must have known, and yet he never came. That was a kick in the stomach. And inevitably, she’d become angry. Now, after two years, it had cemented into a deep resentment. She might just lash out at the first unfortunate soul who came to see her.
The footsteps stopped right outside the door. A double-clank as the deadbolts retracted. A small scratchy noise as someone slid the latch and peered through the glass eyehole. The door didn’t open. Nadia stayed absolutely still. Come on, you bastards, give me my bloody breakfast! The routines of each day were sacrosanct, propping up her sanity. Still the door didn’t open. Voices, muffled, she couldn’t make anything out. A high-pitched cry, female, stifled.
Nadia was suddenly gripped by panic. What if they were going to kill her? Take her outside, shoot her and bury her? Nobody would know; no one would care. She clenched her teeth and fists, suppressed the fear. This was England, not Russia. But her arms and legs tensed like coiled springs, just in case.
The heavy door swung open slowly. She smelled her sister Katya before she saw her, the perfume she knew so well. Katya walked around the door, into full view, tears sliding down her cheeks as she held out her arms.
‘God, Nadia, I’m sorry it took so long.’
But Nadia was already in her arms, squeezing her, gripping her, two years of pent-up emotions erupting. The anger fled, chased away by a deluge of relief. She shook so much she couldn’t speak. Katya whispered soothing noises while the guard waited patiently. Nadia’s face was wet, like the rain she hadn’t felt in two years. She gathered herself, knowing this visit would be kept short. She wiped her eyes and cheeks, and spoke to her sister urgently, taking in every line of her face, details she might have to remember and savour for another two years.
‘How long can you stay?’ Nadia asked. ‘How long have we got?’
Katya bit her lip then pulled Nadia’s face tight to her chest, struggling to get the words out. ‘Time to come home, my Cossack,’ she said.
Nadia’s legs gave way.

Nadia gazed through the scratched plane window the whole flight. Not surprising after almost two years with only a barred window with frosted glass. She couldn’t help herself when they rose above the clouds, so her sister Katya held her while the tears came.
A tall man wrapped in a heavy wool overcoat sat in the row in front. He’d been waiting in the car for them outside the military facility. He had a square, black beard and fierce dark brown eyes topped by bushy eyebrows. On the back of his left hand was a tattoo of a hawk, wings spread wide, as if hovering above prey. He occupied two business class seats: on the second one sat his briefcase.
When they’d passed through customs he’d shown a diplomatic passport, so the briefcase hadn’t been scanned. But when he carried it she noted from the way he leaned slightly that it must be very heavy. He didn’t turn around once during the three-hour flight from Heathrow to Moscow. No doubt he had been the one who had gotten her released, a favour in return for Katya’s sexual attentions, perhaps. Nadia sensed he had plans for her as well. Whatever they were, she didn’t want any part of them.
London’s busiest airport had been a nightmare. Luckily Katya had thought ahead and brought dark sunglasses Nadia could barely see through, and an iPod with serious noise-cancelling headphones, blaring out the latest Russian clubbing anthems. Nadia didn’t crave dancing or nightlife. No excitement, thank you. Just an open field, or mountains. To lie down somewhere – anywhere – and watch the sky. To feel the naked sun, wind and rain on her face.
But she needed to know. ‘What’s his name?’ she asked, nodding forwards.
‘Bransk,’ Katya answered, a sparkle in her eyes.
Nadia hoped her sister hadn’t sacrificed too much. ‘Is he…a good man?’
Katya’s face hardened. ‘Men are what men are.’
Nadia dropped it, and stared out the window during the descent into Moscow, wondering if she and Katya could finally have some normality. But as they passed through the cloud layer, the world below was grey and full of shadows, and Cheng Yi’s last words came back to her, when he had talked of the client.
‘He is blind, but can see. Water and air are the same to him. He will find you in the darkness. You will not hear him when he comes for you.’
She felt a shiver and reached for Katya’s hand. A thought struck her, something she’d not considered until now. That maybe she’d been kept hidden away in solitary for her own protection. Who would have – or even could have – done that? There was only one person.
Jake.


He didn’t answer, and besides, she already guessed they’d be the best.


About the author:
After school J.F. Kirwan studied psychology, then worked in heavy industries, including offshore oil rigs in the North Sea, and nuclear power plants in the UK, US and Japan. Lately he’s been working with airplane safety, which enables him to travel to some far-flung places.

His job is about trying to prevent large-scale accidents. Having studied them for years gives him a sense of how catastrophic events start off slow, simmer awhile, then gather speed and accelerate towards the final event. He uses this experience when writing, and calls it tourniquet plotting. He also spent years as a martial artist, training in Hong Kong, and knows a thing or two about writing fight scenes. But his main passion is diving. He used to be an instructor, and has dived all over the world, and so all three books have an underwater element. Readers – whether divers or not – often say that the books are most vivid in the underwater scenes.

After a scuba-diving injury, and surgery on his back, he couldn’t dive for eighteen months. He missed it so much he started a novel about a young woman, Nadia, who was coerced into working for the Mafia. A fan of Lee Child’s Jack Reacher, as well as other thriller writers such as David Baldacci, Stieg Larsson and Andy McNab, he wanted to create a female protagonist who could mete out justice when required. What started out as a bit of fun gathered momentum as a couple of agents got interested, and then HarperCollins snapped it up with a three-book deal.

I'm hoping to read this series soon after reading so many rave reviews for it!

Thanks for showcasing this one, and also for the great quotes from Amazon reviews!

@JFK
You're very welcome! I cannot wait to read this series :)