a daring rescue - Gossamer: The Chronicles of Eledon #3 by Joni Parker

"Joni Parker is a very strong writer. From the first chapter, she engages the reader with the power of her words. She provides just enough immersive description to hook a reader and balances it with a quick pace. [...]
[T]his book easily captures the characters and their relationships with one another. Parker also quickly establishes her world, demonstrating some exemplary worldbuilding." - Ally, Amazon 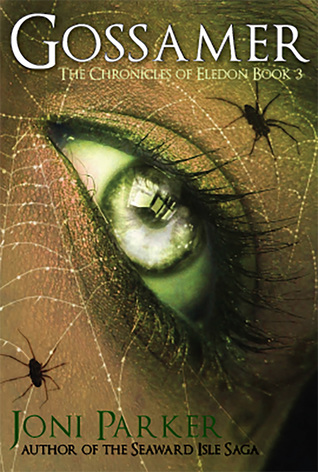 Lady Alexin, Eledon's Keeper of the Keys must continue to prove her powers when her grandmother, Lady Lestin and her friend, Lady Opaline of the Gossamer Elves are kidnapped by rebels and held for ransom.

Alex attempts a daring rescue, only to discover that there is far more to this plot that she immediately suspected and the betrayal extends to the highest levels of the High Council of Elders.

Threatened by rebel factions, suspected by Council members and under attack by deadly spiders, the young warrior has only her wits, her fighting skills and the powers of the Keys to help her. But will they be enough to save them all?

A few years ago, I began writing a book. I didn’t intend for it to become an epic fantasy, but it just kept growing. My inspiration came from the movie, “Lord of the Rings”. I loved the Elves. Not only were they beautiful and intelligent, but they were also in tune with nature. They inspired my character, Alex, short for Lady Alexin Dumwalt. But she’s only part Elf. She’s also part mortal and part Titan, an unusual combination, but necessary for her survival. And just for her, I created a whole new Elf world and called it, “Eledon.”

Eledon was created thousands of years ago by the Mentors, the Elf Guides, when the Elves were forced to leave Earth. Beautiful and pristine, the world had four large continents, each occupied by one of the four Elf clans—Earth, Wind, Fire, and Water. However, petty bickering soon elevated to full scale war, and the clans disintegrated until there was only one clan left intact, the Water Elves. The others broke into smaller groups and moved to different continents and even to the constellations. Governing all was the Council of Elders, a group of twelve Elves, who tried to govern, keep the peace, and work with the Mentors. Over the years, the population of the Elves grew, and eventually, they needed more space. The Mentors began construction on a new continent. Progress was slow, but the land was habitable. It was called Nexus Island and occupied by Rock Elves, formally part of the Earth Clan. They developed the soil and built houses, large farms, and good harbors, but one day, the island became unstable and fell out of the Elf grid, part of the structure of Eledon. The Rock Elves abandoned the island while the Mentors hastily attached it to Eledon using wormholes (entry points) until they could find a solution. Before that could happen, mortals from Earth crashed onto the island, after being taken up by rogue wormholes. Even a Titan ship crashed onto the island as it escaped the War of the Titans. Shortly thereafter, a ring of storms appeared around it, preventing any escape. Over the years, more mortals washed ashore until there were more of them than Elves. The mortals dubbed the island, “Seaward Isle.”

In my first trilogy, “The Seaward Isle Saga”, I document my main character’s life on the island in three books and a short story. The second series, “The Chronicles of Eledon,” includes four books and begins with “Spell Breaker,” a 2016 Book Excellence Award Finalist and was followed by “The Blue Witch,” a 2017 International Book Award Finalist. “Gossamer” is my latest novel and introduces Lady Opaline, who unknowingly will help in the final conclusion, even though she doesn’t know it. “Noble Magic” is the final book in the series and will be published later this year. About the author:
When I was younger, I never knew what I wanted to be when I grew up. Part of my reason for dropping out of college was because I didn’t know what to major in. I was envious of my sister who knew from an early age, she was going to major in math. Good for her, but math was the last subject on my mind. I joined the Navy and found a track I liked. I became a photographer. I covered local news items, accidents, and even shot portraits. It was fun, but not a career path. When I got out of the Navy, I wanted to finish college but I was lost again. What to major in? I chose accounting because all businesses needed it and I went on to get my Bachelor’s and an MBA. After working in the field for a year, I went back in the Navy and asked for any assignment other than accounting. It worked. After 22 years in the Navy, I retired. My husband and I moved into our motorhome and hit the road. Unfortunately, he passed away and I went back to work at a government job. Then I found writing. I hadn’t written a thing since I was 14 but I was smitten by the bug and have been writing ever since. “Gossamer” is the sixth book I’ve had published and is the third book in a four book series, “The Chronicles of Eledon.” Hope you enjoy it. I had fun writing it.

Thanks for hosting my book! I enjoyed bringing the story of Lady Opaline of the Gossamer Elves. Believe it or not, it's important for the final resolution of Seaward Isle.