Ella slips deep into the dangerous black market, posing as a tarnished pet available to buy or sell. If she's lucky, she'll be able to rescue Penn and expose the truth about the breeding program. If she fails, Ella will pay not only with her life, but the lives of everyone she's tried to save... 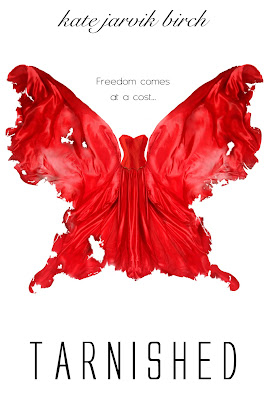 Freedom comes at a cost...

Ella was genetically engineered to be the perfect pet—graceful, demure...and kept. In a daring move, she escaped her captivity and took refuge in Canada. But while she can think and act as she pleases, the life of a liberated pet is just as confining as the Congressman’s gilded cage. Her escape started a revolution, but she’s trapped, unable to get back to Penn—the boy she loves—or help the girls who need her.

Back in the United States, pets are turning up dead. With help from a very unexpected source, Ella slips deep into the dangerous black market, posing as a tarnished pet available to buy or sell. If she's lucky, she'll be able to rescue Penn and expose the truth about the breeding program. If she fails, Ella will pay not only with her life, but the lives of everyone she's tried to save...

“You came,” I said. “Of course.” He closed the distance between us in a heartbeat.

Standing before me, he reached out and stroked the blunt ends of my hair.

“As I was walking down here, I wondered if maybe I’d dreamed you. If it wasn’t real. But here you are.”

With his thumb and his forefinger, he gently lifted my chin and pressed his lips to mine. His mouth moved slowly, tenderly. Time slowed. Melted. Broke away. The moments stretched, as fluid as water, flowing forward: a drop, a river, an ocean, until I was suspended inside it. Lost.

He pulled away and the world rushed back into focus, time crashing down around us.

He shook his head. “Don’t worry. He won’t follow me out here. No one will.”

Penn shook his head. “He has the house bugged. He lis- tens to everything: all my phone calls, all my conversations. He has a chokehold on me, but it’s safe out here.”

“What about those men?”

“His henchmen?” Penn chuckled, but it was a sad sound. “They won’t come, either. I’ve been coming out here almost every night since he hired them. They’re lazy. They got sick of following me after the first few nights. Once they realized that I was just coming out here to sit, they gave up.”

He pulled me into him again, holding me so tight against his chest I could feel the thrum of his heart against my cheek.

“I can’t believe you’re really here,” he said. “I didn’t think I’d ever see you again.” I looked up at him and he turned away, his face contorting. “I thought about trying to come to you a thousand times, but I didn’t know how. My dad is watching the borders and I think he almost expected me to go running after you. But he never could have dreamed that you’d come back.”

There was so much to tell him about: My escape from the refugee center, the train, the horrible things I’d seen in the black markets.

“There’s no time now, but I promise, I’ll tell you later.”

He sighed. “At least I got this chance to hold you one more time. To touch you. But you can’t stay. It’s too dangerous. If my dad knew you were here—”

“What has he done to you?” I ran my fingers through his cut hair. Even after he’d been sleeping on it, it looked too groomed, like his father had managed to suck the wildness right out of the top of his head.

“But I’m not okay without you.” He closed his eyes. He wasn’t okay either.

Kate Jarvik Birch is a visual artist, author, playwright, daydreamer, and professional procrastinator.
As a child, she wanted to grow up to be either a unicorn or mermaid.

Luckily, being a writer turned out to be just as magical.
Her essays and short stories have been published in literary journals including Indiana Review and Saint Ann’s Review.

She lives in Salt Lake City, Utah with her husband and three kids. To learn more visit

I would escape from where ever I was and find a way to get back to him.

Guy or no guy, they would have had to kill me before I was forced to go anywhere. I would assume that their intent was to kill me, so I might as well die fighting. I'd rather die on my terms, not theirs.

I would do whatever it takes to get back to him. I would find the deepest strength and fight.

must go back to my lover..
thx u for hosting...

I would fight my way back to him.

I don't know because I've never been that much in love with a guy.

I would fight and prevent that from happening

I would do anything to get back to him!

The way I feel right now, I might help them pack his stuff.

I am a guy. I will say that they would have to kill me to keep me away from my wife.