Her only hope rests with a boy who can’t remember her - The Elementalist by Melissa J. Cunningham

From Goodreads: "The books had some eerie, creepy moments, something I deeply appreciate since it made the story a lot more interesting. Also I love the fact that the books keep you hooked until the very end, and the action is not missing either. I know the genre is not horror, but I love it how these books still give you some chills. The whole setting of the afterlife is unique, like nothing I have ever read.[...] Dramatic, paranormal, slightly eerie, and packed with action! " 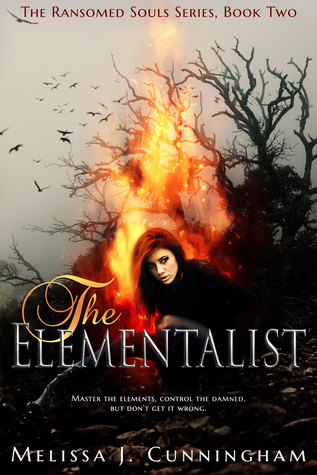 Deceased Alisa Callahan thinks nothing could be worse than watching the boy she loves move on in his life without her… until she is ripped from her less-than-peaceful existence in Elysium to be trapped… in someone’s else’s body.

Seventeen-year-old Claire Balister wants only one thing. To master the art of Elementalism. To accomplish this, she must learn to control a damned soul. Her old classmate and suicide victim, Alisa Callahan, is the perfect candidate. But when the spell goes wrong, Claire finds herself in the worst possible situation… sharing her body with an unwanted guest.

Everything swirls out of control when Alisa learns the terrifying truth about her entrapment. Her only hope rests with a boy who can’t remember her, his past, or more importantly, who he really is…

One of the bad guys.

Guarding Brecken Shaefer - a dark and dangerous rebel-is harder than it looks.

Death was nothing like sixteen-year-old Alisa Callahan thought it would be. Resting on pink, fluffy clouds for eternity with her gram and best friend sounded like a dream come true. After all, enduring one torturous experience after another in her short life deserved some kind of reward, right? Unfortunately, eternal rewards aren't given out so freely when you take your own life. Required to pay the debt for committing suicide, Alisa must become a guardian. It sounds easy enough, but not when the boy she is forced to protect has a dangerous secret and wants absolutely nothing to do with her.

Brecken Shaefer isn't any normal teenager. He has special gifts that are sure to make Alisa's afterlife miserable. When feelings develop between them, everything spins out of control. Not only must Alisa face her own demons- but to protect Brecken, she must face an evil so heinous that it threatens to destroy their souls completely. Alisa is tired of hiding from her past.

When the easiest thing to do is run, can Brecken give her the strength to stay?

She cursed under her breath. It could only be one person, she chose to ignore him, but the banging continued. She glanced at the clock. Five minutes left. She had time to quickly tell Jamie to leave.

Claire hurried across the hall and into her room. Unlatching the window she let it swing open. “Jamie, I can't talk right now.” She tried to shut the window, but he blocked her efforts with his arm.

“It doesn't matter. You have to go.” She pushed on the window harder, but instead of backing away like he would have in the past, Jamie climbed inside. He stood in her room as she stared him down, her jaw clenching.

“I don't have time for this!” she yelled, and ran back into the bathroom, slamming the door behind her and locking it.

Three minutes were left on the timer.

“Are you okay?” Jamie asked from the other side of the door.

“Argg!” She refused to explain. It was none of his business. Why wouldn’t he just leave? She could hear him on the other side, his feet shuffling.

“I'll just wait in your room then. I want to tell you something important.”

“I saw that guy come over here. I saw him come into your house, Claire. I have a right to know why he's here. I know he's not here for your mom. I saw her leave.”

Claire gritted her teeth, refusing to be baited by his jealousy. He was watching her house now? She’d known he would be like this if they got too serious, and now she regretted their budding romance.

“After the other night, I have the right to know if you like him. I mean—”

Jamie's fist banged against the door in frustration, and Claire jumped, startled, her heart racing from more than just this intrusion and the timer flew from her fingers into the bathwater with Brecken. Face up, it continued to count down, even under the water. Five, four, three.

With shaking hands, she grabbed Brecken by his T-shirt and tried to pull him up, but he was much heavier than she’d anticipated, due either to dead weight or the water in his clothes, maybe both, and he fell back under the water causing waves to spill over the side of the tub and drench her shoes.

She screamed in fright, because the spell only protected him for exactly ten minutes.

“Claire? What's going on? What happened? Water just came under the door!” Jamie pounded on the other side, his hammering like thunder in her ears, her complementing shrieks producing the perfect storm.

Grabbing Brecken behind the head, she sat him up in the tub, but he was slippery and hard to hold. His head lolled forward and water spilled from his mouth and nose. “Brecken! Wake up!” she screamed, trying to slap him to awareness, but the only thing her struggles did was make him slip out of her grasp and back under the water.

GoodReads ** Smashwords ** Amazon
About the author:

Melissa J. Cunningham began writing five years ago when she decided, out of the blue, to enter a community writing contest and won first place. From that moment on she had a new love: Writing. Melissa is a member of the League of Utah Writers. Her past publication experience includes a recurring opinion column called Writing Reality, for her local newspaper: The Leader

When Melissa is not writing you can find her spending time with her family and her horses, cats, dogs and chickens or reading. Melissa is also a local music teacher.