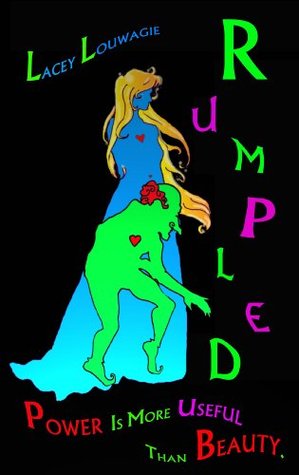 Gold for a poor girl,
Beauty for a twisted man,
A child for a powerful sorcerer . . .

Rumpelstiltskin can change anything he touches into gold, but he cannot change his own twisted body. The sorcerer Laurus can make Rumpelstiltskin tall, strong, and handsome—but he will only work his magic in exchange for a child in its first year of life.

When Emily’s deluded father claims she can spin straw into gold, the King demands proof. Caught between a mad father and a mad king, Emily’s life hangs in the balance. Rumpelstiltskin will help keep up her ruse for three nights—if she promises him her firstborn child.

When the King decides to marry Emily, the pretense must continue for much longer. And what Emily offers Rumpelstiltskin in return for his continued help has the power to change everything.

Why a retelling? What makes an author retell another’s story?
When I first got the idea for this story, I didn't know it would end up being a retelling. My husband asked me a hypothetical question about a bargain for a firstborn child, and I wanted to explore the answer to that question. I was going to write an original story around it, but then I realized that our cultural imagination is rich with stories that include a barter for a firstborn child. Of all these, “Rumpelstiltskin” has always intrigued me. I love retellings, so I decided to explore my husband's question through a retelling rather than through an original story.

What compels me to write a retelling is when a “what-if?” question gets stuck in my head and won't go away. There are a lot of gaps in fairy tales, a lot of unanswered questions. For me, writing a retelling is one way to fill in those gaps. I wrote guest posts that delve into my relationship with retellings in a little more detail at Corey's Book Reviews (May 15) and Andi's Book Reviews (upcoming: May 21). You can also read more about my inspiration behind this story at Hopelessly Devoted Biblophile's blog.

About retellings – how free is an author to change the classic story and is there some element that must remain unchanged?
This is a really good question. The short answer is that an author can change anything she wants about an old story, at least if it is in the public domain and no copyright restrictions exist. But I think that the best retellings retain the iconic events of the original story as pillars that support the new story being built. “Rumpled” contains many familiar elements from the original: a little man who can spin straw into gold, a bargain for a firstborn child, and the importance of guessing Rumpelstiltskin's name. It's in the details between these events, and how they play out, that readers will find something new. 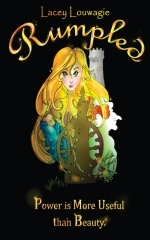 “Rumpled” is for 14+. What do you think about the young generation’s reading habit and what can be done to make this generation read more?
I used to be a teen services librarian, so I spent a lot of time with teenagers who love to read. Young adult books are the biggest moneymakers right now, and even though about half of those are being bought and read by adults, I don't think the field would be booming if there weren't a lot of teenagers who are passionate about reading. I think the secret to encouraging young people to read is to let them make their own reading choices – and don't judge them. Studies have shown that reading for enjoyment is the biggest predictor of academic success, no matter what a kid is reading. We need to stop worrying about grade level, swear words, and comic books and let a kid's own interests guide her. Many teens who feel daunted by novels are happy to read comic books or magazines. The important thing is that we as adults accept their reading choices as valid.

Rumpled has two different covers. Are the covers important for the story or for the book? How did you choose the covers and is the author’s agreement (or author’s implication) necessary? What about the book trailer?
When I hired my cover artist for “Rumpled,” she sent me several covers. I decided to go with the cover that is now on the paperback book, which features the miller's daughter as a centerpiece framed by Rumpelstiltskin, the child, the tower, and the spinning wheel. But I noticed that all the detail I liked on this cover was somewhat hard to see in thumbnails, so I decided to go with a “simpler” version for the ebook. I put “simpler” in quotes because I think the simplicity of the ebook cover raises more questions than the more traditional cover does; I like the sense of movement in the sneaking shadow of Rumpelstiltskin especially.

Because I published “Rumpled” independently, I made all the decisions for the cover art. I know traditionally published authors have very little say over the covers for their books, which I wouldn't mind. I prefer to leave that in the hands of an expert!

I made the book trailer myself using images from the cover artist and other images and music from the public domain.

What does Rumpelstiltskin represent?
To me, the story of Rumpelstiltskin is about moral ambiguity. In many fairy tales morality is black and white, but in Rumpelstiltskin it's mostly gray. Rumpel is assumed to be the villain—but all he does is try to collect on a bargain that was already made. Is he evil for expecting the queen to hold up her end of the deal? Or is he evil for making such an extreme bargain in the first place? In the end, he gives the queen an “out” – telling her she can keep her child if she guesses his name. So what we see is someone who helped her out of a desperate situation when her father lied about her ability to spin straw into gold, then gives her a loophole when she doesn't want to pay up. Yet he is still the one who is punished at the end, becoming so enraged that he tears himself in half.

About the author:
Lacey has been writing since she was old enough to hold a pencil and fold a few pieces of paper together. Her first book, full of pictures of unicorns, started her on the path of writing science fiction and fantasy. She has worked as a freelance writer and editor, magazine editor, reporter, and librarian. She lives in a tiny house in South Dakota with her husband, two cats, a dog, and hundreds of books.

Winner was announced on 25th of May.
a Rafflecopter giveaway
Posted by CCAM at 3:30 PM

Stories about Rumpelstiltskin are few, but not enough for us, the readers. I want to read more about that character. Even If I dont't like the cover, I will search the book because i want to read it.