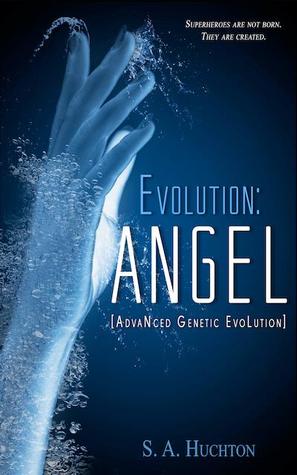 Candace Bristol has always been obsessed with comic books, but in a world where the nightly news often mirrors these inked stories, her dreams of becoming a real superhero could actually come true. After being rescued by members of the government’s AdvaNced Genetic EvoLution (ANGEL) Project four years ago, getting recruited for this elite team is all she's wanted.

Now 18, she's finally reached her goal after years of study and physical training, but little could have prepared her for life as a genetic experiment. As though coming to terms with her new ability to manipulate water isn't tough enough, she never expected to be swept off her feet by one of her fellow recruits.

With genetic alteration, the threat of physical and mental instability hangs over every superhero like a shadow. When one of their own tumbles over the edge of madness, Candace will have to choose between protecting the world, and saving the one who holds her heart.

When it comes to music and writing, to me it’s more of an enhancer than an absolute necessity. When I’m writing, I prefer to have silence as my brain starts following along with notes and lyrics, rather than concentrating on my words. That said, I do use music to set my scenes and inspire new ones.

There are times when I can’t be writing because my hands are otherwise occupied (by driving, cooking, designing things), and for those times I start up Pandora. I have two stations I’ve cultivated very carefully as the songs that pop up on those have a tendency to speak to my past, current, and future projects. I’ll hear a song and it will either spark a new scene or speak to one I’ve already written. Songs are little stories within themselves, and the right one sends my thoughts spiraling off on paths of “how did the situation come to that point?” and “what happens after that?”. If a song does that, I make a note of it on my phone and then…

I add it to the playlists I build on Spotify. Each series or book I’ve worked on the last year has a specific playlist. I use these in two ways. First, it comes in really handy for doing blog tours when a playlist post is requested (advanced planning FTW!). But, more importantly, is that these songs can absolutely get me in the right mindset when it’s time to sit down and write. When it comes to my superheroes, “Radioactive” by Imagine Dragons and “Poison & Wine” by the Civil Wars are my main scene setters for this series. The former is for tense action scenes, the latter delves into the romance aspect. Those two pieces have helped me through many a time when I simply couldn’t think of what came next.

When I finish projects, the songs I associate with them become nostalgic to me. They become echoes of memories that take me back to the emotional place I was when I wrote a particular scene or story. Like songs you hear that remind you of your first love in high school, or the friend you had way back when, or a particularly amazing night you had with your friends at a club… music conjures memory. Strange to think that, for me, music also conjures fictional memory, but I suppose that as an author, I’m emotionally tied to my characters as much as I am to my closest friends. Music is a way to reconnect with them.

So, I take it back. Music is an absolute necessity. How would I ever remember my friends without it?
View my playlists and follow me on Spotify here: https://play.spotify.com/user/riznphnx

Starla Huchton released her first novel, The Dreamer’s Thread, as a full cast production beginning in August 2009. Her first foray into podcasting went on to become a finalist for the 2010 Parsec Awards. Since her debut, Starla’s voice has appeared in other podcasts including The Dunesteef Audio Magazine and Erotica a la Carte. She is also a voice talent for DarkFire Productions, and narrates several of their projects, including The Emperor’s Edge series, This Path We Share, and others. Her writing has appeared in the Erotica a la Carte podcast, the Farrago Anthology, a short story in two parts for the world of The Gearheart (Fires in the Snow) and, an episode of the Tales from the Archives podcast, which garnered her a second finalist badge from the 2012 Parsec Awards. Starla’s artistic endeavors continue into music as her dulcet tones have provided sweet crooning for various podcasts produced by Alex White, Koru Studios, and Imagine That Studios. Her latest project, currently being shopped for representation/publication is Antigone’s Wrath, a Steampunk adventure. It was the first place winner in the Fantasy/Science Fiction category of The Sandy Writing Contest held annually by the Crested Butte Writers and is currently on the desks/ereaders of several publishing professionals for consideration.

After completing her degree in Graphic Arts at Monterey Peninsula College, Starla has opened up shop as a freelance graphic designer focusing on creating beautiful book covers for independent authors. To view her work, please visit Designed by Starla.

I think I would want to fly! It would be so much easier getting from point A to point B!
Missie @ A Flurry of Ponderings

I would need super speed to run away because I am a coward.LOL

My favorite power would be telepathy. Of course, I would face the problem of blocking people's thoughts out when I really want to hear just myself thinking.

To be invisible, I guess .

wow! love this giveaway. I wish i could talk to animals or read people minds but only when i wanted to.

My favorite superpower would be to heal injured people.

XRay vision. I'd like to be able to see everything no one else can see.

My favorite super power would have to be flying.

Reading minds would be the coolest power :D

I like all super powers but controlling the elements would be mine.

To be invisible to get back at my enemies.