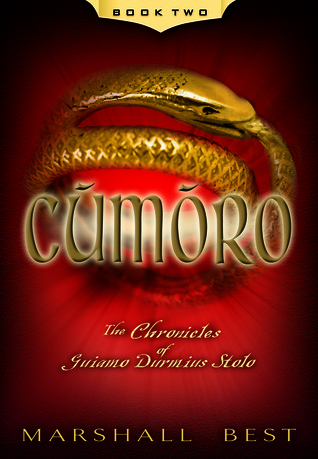 Cumoro, the second volume of The Chronicles of Guiamo Durmius Stolo Series continues the wonderful adventures of the young Guiamo in the entrancing anciently world. If in the first book we had a fresco of Roman life during the Republic period strewn with historical events, now we will reach the mirifical world of fantasy. The true historical moments will be much less being only the trigger for our hero’s new adventures.

To put spurs to your imagination, the author will make a 180 degree turn in the story flow and the real will be replaced by the imaginary. The world in which Caesar was the law begins to resemble more and more to the bygone Greek legends, the old heroes’ times when the bound between the realm of the gods and the human’s was more permeable. But no the gods or other legendary characters of the Greco-Roman world will ignite the pages, but the Celtic mythology ones because the set for the second volume of the series will be the dark and mystical world, literally and figuratively, of the old Albion.

Young Guiamo will arrive in Britannia with the first Roman invasion of the island, that of Caesar in 55 B.C. Through an unfortunate combination of circumstances for him, but that will prove to be auspicious for the inhabitants of those places, Guiamo will find himself quite quickly caught up in a new conflict at a totally different caliber. The little Caesar's escapade will prove to have been only a trivial firework compared to the warfare that was taking place between local tribes and the terrible forces of Darkness. Of course, the inventive and brilliant Guiamo as we know him and a bit more mature, will not give back to the new challenges. Assuming the new situation and recognizing in it the words of the oracle, Guiamo will rise again to the situation with the imagination and determination showed in the first volume.

What this volume brings extra? Action! Yes, action with a capital A! You will have full pages of atrocious battles, of bloody fights whose outcome will oscillate to one side to the other. There will be no more the elegant and brilliant Caesar's maneuvers that could win a battle like a game of chess. Will be the wild frays of those feral times and places. The way of being and acting of the opponent leaves not too many options. So get ready! Forget about that cute and exuberant kid and meet an unleashed Guiamo and his wrath.

The book’s style is the same as in the first volume: fluent and charming. Obviously the tone of this volume will be a little more sober and the funny moments of the first book will not find their place here, but rest assured, you will not lose anything.

I guarantee you will not be disappointed, and if you enjoyed the first volume, this one will make you to read it breathless. As I said to you in the review of the first novel is a welcome reading for young, but that can be read with pleasure at any age.


As the lighting blazed in a dancing, arcing column to the sky, a voice deep and powerful as thunder said, “My son, today my powers are bestowed upon you.”

Combining legitimate legends with actual historical events, Marshall Best weaves an epic story that portrays the ancient world as it might have been, a world which the ancient historians recorded as fact; a time when gods ruled the earth and strange creatures dominated the land. It is the era of civilized conquerors exploring distant and primitive new lands. Scant recordings left to us today only touch on the fringe of the fantastic and brutal reality that existed in those distant lands of the west. Into this age, young Guiamo enters the world stage as the great game-changer, and by his hand the gods and beasts become destined to disappear into myth and legend.

SPECIAL TOUR PRICE on Createspace
$3 off each book
Use coupon code: GS9D2K7C

Marshall Best is an avid reader, father of six and business owner. In the past several years he has found his love of writing as well. What began as a desire to write a story for his children has evolved into a nine book series.


Marshall has done extensive research into the history behind the legends, people and places of England, Scotland and Ireland involved in his books. He loves being able to weave real people and legends into his stories making them come alive. He is definitely a writer that tends to the details often mapping out timetables, calendars, geneologies, etc. that pertain to his book to ensure that it is as realistic as possible.

Marshall also enjoys putting real life issues into his books, delving into a bit of philosophy while entertaining with orcs, dragons, magic and battles. He is someone who loves a grand adventure but makes sure it's not a shallow one.

Thanks for being on the tour!

The cover scarry me:)) Nice snake. I haven't read a book with chronics, about history and all this thing, but sounds great.

Waiting to read it

As much as I love books I don't always remember facts that being said.. I didn't score high. ;(

havent read it yet.