In this children’s picture book, President Thomas S. Monson recounts a Christmas memory from his childhood. As a boy, he yearned for an electric train. To his delight, on Christmas morning he got exactly that a train that operated through the miracle of electricity. Then he noticed a second train that his mother had purchased for the boy down the street whose family was struggling. Although it was only a wind-up train, it had an beautiful oil tanker car, which little Tommy wanted for his own. Soon after, Tommy s mother invited him to accompany her to the neighbor s home to deliver the gift. Young Mark was thrilled with his new train and, of course, didn t notice the missing train car. However, a remorseful Tommy did. What happened next will bring the spirit of Christmas into every heart and home. Illustrated by renowned artist Dan Burr, The Christmas Train is sure to be a classic Christmas story and a beautiful addition to every Christmas library.

Includes a QR code for a FREE download of President Monson's narration of the story!

Download the new interactive Christmas Train app for your iPad! The pages come alive with animations, sound effects, and narration by the author, Thomas S. Monson. Kids will love listening to a true Christmas story, read by a familiar voice, while navigating trains, turning Christmas lights on and off, and experiencing the importance of giving during the Christmas season. 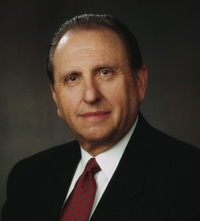 President Thomas S. Monson was set apart as the sixteenth President of The Church of Jesus Christ of Latter-day Saints in February 2008. He had previously served for twenty-two years in the First Presidency of the Church, after having been a member of the Quorum of the Twelve Apostles since October1963.

Five years after his call to the Twelve, he was given a special assignment for the work of the Church in Europe, requiring many visits with members behind the Iron Curtain. He was instrumental in the construction of the Freiberg Germany Temple and in advancing the Lord’s work in other eastern European countries that were part of the communist bloc. He also served as chairman of the Scriptures Publication Committee and supervised the process that resulted in the new editions of the scriptures.

Dan Burr earned his bachelor of fine arts degree from Utah State University and a master’s degree in illustration from Syracuse University. He and his wife, Patti, are raising their two children in the Teton Valley of southeast Idaho, a setting that provides great artistic inspiration and fantastic fly fishing. Dan is a well-known illustrator, having been in the business for many years, most recently working as a children’s picture book illustrator. A few of the books Dan has illustrated are The Miracle of the Wooden Shoes; God Bless Your Way; A Christmas Journey; and I Heard the Bells on Christmas Day.


Tour Giveaway $25 Amazon Gift Card or Paypal Cash Ends 12/31/13 Open only to those who can legally enter, receive and use an Amazon.com Gift Code or Paypal Cash. Winning Entry will be verified prior to prize being awarded. No purchase necessary. You must be 18 or older to enter or have your parent enter for you. The winner will be chosen by rafflecopter and announced here as well as emailed and will have 48 hours to respond or a new winner will be chosen. This giveaway is in no way associated with Facebook, Twitter, Rafflecopter or any other entity unless otherwise specified. The number of eligible entries received determines the odds of winning. Giveaway was organized by Kathy from I Am A Reader, Not A Writer and sponsored by the author. VOID WHERE PROHIBITED BY LAW. a Rafflecopter giveaway
Posted by CCAM at 10:00 AM