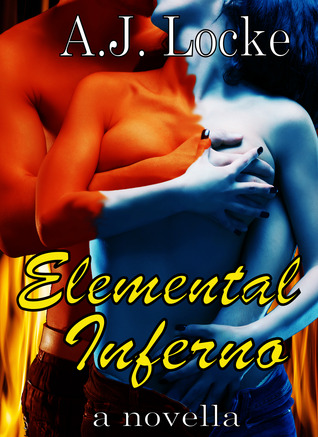 Rielle is a Winter Aura who for the past hundred years has held the job of controlling winter weather in her assigned area. During the non-winter months she can live as she pleases, as long as she doesn’t do anything that would make her lose control of herself, which could unleash her power and have it snowing in July. Therefore, sex outside of winter is a big no-no, because what could make her lose control of herself more? If Rielle is unable to keep her winter magic dormant during her off seasons, she will be forced to Sleep by the Aura Elders. For Auras, it’s a fate worse than death.

When the Summer Aura for her area winds up mysteriously dead, summer weather spirals out of control until another Summer Aura arrives in the nick of time and brings things back to order. Aden is as gorgeous and alluring as they come, and before Rielle knows it, she finds herself with a roommate at the urging of the Elders, who seem uneasy about Aden, and want an eye kept on him. Rielle and Aden have a magnetic attraction to each other, and for the first time Rielle is afraid of losing control. However, Aden is much more than he seems, and when he shows Rielle a way to indulge their passions without repercussions, it seems too good to be true. But Aden’s secrets are ones the Elders fear, and can’t ignore. As they close in on him with deadly force in mind, Rielle will have to decide if Aden is in fact too dangerous, or if it’s worth going up against the Elders to save the man she’s losing her body, and heart to.

I think most people would only accept a job where their sex life was dictated by what season it was if their life depended on it. Then again, they might choose to die and have as much sex as they could before then. When I had accepted the job almost a hundred years ago, the fine print hadn’t seemed like a big deal. Yeah, I’m old. Immortal if you wanted to get technical, but I only looked about twenty-five. And though my life had depended on taking the job back then, that didn’t make the rules any easier to accept.

Especially since today was the hottest fucking day. It was the kind of day where people threw around adjectives like wet, hot, and sticky, while skirt hems were tugged up and shirts were peeled off. I guess the idea was the more naked you got the less the heat would affect you. I’d finally given up trying to read in a corner of the Brooklyn Public Library, because the conversation a group of people were having at the table next to me was making my ears burn. And it wasn’t because I was a prude. It was because I wanted sex.

Usually I wasn’t so hard up, but the intense heat that had suddenly come across the city had brought this carnal rage to the surface, which was why I was standing in front of a calendar in my apartment calculating how long it would be until I could wrap myself around someone’s body. It was late June, winter was about five months away, and I last had sex three months ago. I braced one hand against the wall, dropped my head, and released a slow exhale, trying to quell the thrumming in my body that had been present since I had woken up to this heat wave three days ago. It was only the beginning of summer, damn it. Yesterday’s high had been a hundred and six, and today it was even hotter.

I bet Bero had done this on purpose. That annoying asshole of a Summer Aura probably thought an early summer heat wave was just we needed. Wouldn’t be the first time he did something like this, but the Elders should have made him stop it. Over the past three days, dozens of people died or were incapacitated by the heat, especially children and the elderly. There were heat strokes galore, and crowded public pools. Hell, I had only high-tailed it to the library for their air conditioning. Mine was barely cooling my apartment down. I would have loved to use my winter magic to cool myself, but being out of my season meant I had to keep myself ridiculously in check, since a slip up could have it snowing in June, and the humans would think that signified the apocalypse. Here was where the ‘no sex until winter’ thing came in, because what could make a person lose control of themselves more than being in the throes of passion?

A.J. Locke is a writer of Urban Fantasy, as well as an avid reader. She loves reading both YA and adult novels, and also enjoys post-modern Japanese fiction. A.J. is also an artist, and enjoys drawing, painting, and graphic design. Affairs of the Dead is her debut novel and is available now from Etopia Press.

a Rafflecopter giveaway
Posted by CCAM at 2:30 PM

Uh, just fost US? :( So sad. The necklaces are great, so beautfiul, and it's sad because I can not participate. That's it. Another date. Good luck. The best giveaway.