Excerpt and Giveaway Class of '98 by A.L. Player 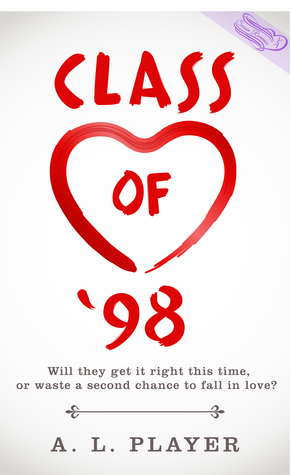 Jackie Dunn and Matt Stewart barely knew each other in high school, back when she was a blue-haired alterna-kid and he was a preppy jock. High school rules dictated they'd never hang out, or sit at the same lunch table, or God forbid, date.

But when a weird storm transports them from their ten-year reunion back to senior year, they have to work together to figure out a way to get back to 2008.

Stuck in high school, Jackie and Matt agree to tough it out. They agree to do everything exactly as they remember, even though that means staying with the boyfriend Jackie knows will betray her, or playing nice with the girl that will someday be Matt’s ex-wife. Soon, they come to rely on one other, even become friends.

Jackie’s just starting to get used to curfews and term papers again, when Matt hits her with the biggest surprise of all: he’s fallen in love with her. He’ll change the past however he has to if it means a future with Jackie. But Jackie’s terrified they’ll not only alter their lives, but the lives of everyone around them.

Back to the Future meets She's All That, Class of '98 is a young adult/adult crossover that will appeal to teens and adults. 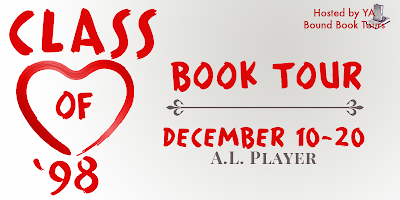 Jackie Dunn needed a change, and she was about to get one. For four years she had worked in the same bile-yellow cubicle, listening to her officemate hum flat tunes over the partition. She had slogged through twelve-hour days, translating page after page of legalese that scrambled her brain. She had taken contracts home over weekends and holidays. Now all that work was about to pay off. Today, at four o’clock, she would meet with the partners, who would give her the promotion she’d been desperate for.

She had the whole day planned for weeks. First, the purchase of her celebratory coffee a half hour before her meeting with the partners to allow it time to cool to the perfect temperature. That first sugary, whipped-cream-and-chocolate sip would taste particularly good when the partners told her the international liaison position was hers. Then, she would sign the new contract, which promised not only her own office—complete with hum-silencing door—but also a hefty raise and frequent trips to Spain, Chile, and Argentina to meet with the heads of the companies her firm did business with. On those late evenings when she thought she couldn’t work another minute, she’d used the dreams of sprawling on sunny Chilean beaches or late dinners at the Ritz-Carlton Madrid to propel her forward.

The icing on her perfect day’s cake would be leaving the office a few minutes early to zip down the highway to her ten-year high school reunion. She picked out her favorite blue dress and brown wedge boots and wore them to work so she wouldn’t have to stop by her condo on the way to the school. Jackie could envision herself, clad in the perfect outfit, greeting old friends and not-so-subtly slipping in news of her promotion. Her classmates would have to be impressed at how perfectly her life had come together.

The partners announced the month before that the choice was between her and one other candidate, Walker Melton. She absolutely had the advantage. As far as she could tell, the most Walker Melton had contributed to the office was a tendency to tell off-color jokes at the worst possible moment. She hadn’t been sure the promotion was hers until that afternoon, though. The partners went in for their meeting to discuss the candidates, with Jackie’s boss, Tyrone, in tow. Jackie searched Tyrone’s face for a sign, and he grinned and winked. She took the look as a green light to run to Starbucks for the seven-dollar calorie bomb she never would have allowed herself on a normal day.

At last, the electric-blue clock on her desk clicked over to four o’clock. Jackie closed her laptop, grabbed the coffee, and walked down the plush carpet to the conference room for her meeting. Tyrone and the partners were already assembled, standing beside the round oak table. Her grin wilted a little. Shouldn’t they sit down to sign the contract? Her stomach dropped. A quick glance at their hands told her no one had papers of any kind.

Mr. Houston, the short, bald senior partner, nodded at her. He offered her a tight smile. “Good afternoon, Jackie. Thanks for meeting with us.”

“Thank you, Mr. Houston.” She went to take a seat in one of the high-backed leather chairs, but he held up a hand to stop her.

Oh, no. Jackie placed a hand on the back of the chair, in an imitation of nonchalance, but the wheeled chair shifted and she had to do a quick sidestep to keep her balance.

Tyrone stepped forward. “Jackie, you know we appreciate how much you do for this company. This was a really tough decision. But, in the end, the partners and I have decided to go with Walker.” He smiled a little. “Something good will come up for you soon, I’m sure.”

Jackie gritted her teeth, but the words still screamed in her head. But my office! With a door! The Ritz-Carlton! The beeeeeeach. She took a deep breath and nodded. “Right. Well. Thanks for considering me,” she said, gripping the coffee in both hands. She turned to walk out, and Tyrone followed her back to her cubicle.

“You know I do twice the work he does.” Jackie leaned against the wall. “I basically did the entire last contract translation by myself.”

Tyrone held up his hands. “It’s true. You’re a real team player. But you have to take into account that Walker’s kid was sick those two weeks.”

“I thought the kid just had the chicken pox.”

“Walker took on as much as he could, but his family comes first. That’s just not something you have to worry about at this point.”

Jackie threw a hand in the air. “And that’s what this is about, isn’t it? I’m single, I can spend all weekend poring over work, right? No kids, no sick days.”

Tyrone ran a hand over his shaved head. “Look, when you’re the one with a family you’ll be glad this company takes that into account. Your day is coming. It’s just not today.”

Jackie looked down at the formerly celebratory coffee and decided to re-christen it as a comfort coffee. She raised it to her lips and tilted the cup, ready for its warm reassurance. Instead, she felt a tap of plastic on her nose, followed by a flood of liquid over her mouth and down her dress. The lid, now resting in a brownish puddle on the floor, hadn’t been on tight enough, and the entire drink now soaked through her favorite outfit.

She squeezed her eyes shut for a long moment as coffee dripped from her chin. When she opened them again, Tyrone stood staring at her, his mouth slack and his brown eyes wide. She straightened her shoulders and back, trying to reclaim what little dignity she could with a beverage slopped down her front.

She dropped the empty cup into the trashcan and grabbed her purse. “Then I’m taking a personal hour, I guess. See you Monday.”

Jackie turned back to him and fought the urge to scream. “Yes?”

He cleared his throat and picked up a file folder from her desk. “Any chance you could take a look at the new contract this weekend?”

In the silence that followed, she could hear the drip of coffee from her dress hitting the floor. Every muscle in her body felt like a rubber band about to snap. Even her hair was tense. Tyrone raised his eyebrows. Finally, Jackie held out a hand, and he gave her the file folder.

“Thanks,” he called over her shoulder as she sped down the hall.

On the way to the elevator, she ducked into the bathroom for paper towels, but they did nothing to sop up the brown stain spreading across the dress. The coffee did, however, make the outline of her bra and panties clear through the thin fabric. She wiped the last of the coffee off her chin then sprinted back out toward the elevator, holding her purse awkwardly across her front to try to cover the mess. As soon as she hit the button, the elevator door dinged open, and she breathed a little sigh of relief when she stepped in. Maybe she could get to the parking garage without anyone seeing her.

A hand appeared between the closing doors. They sprang open again and Walker Melton stepped in, all goofy grin, bulging eyes, and a frat-boy sweep of brown hair. The four-letter words bounced around in Jackie’s head so forcefully, she worried they might project out of her eyes and onto the wall of the elevator, like a vulgar PowerPoint slide.

“Hey, Jackie,” he said, as his eyes traveled down her front. “Whoa, did you spill something?”

“No. Purely decorative.” She held her purse in front of her again, jabbing the button for the parking deck five or six more times, until the doors slowly closed. “I guess congratulations are in order.”

“Thanks. Not sure my wife is going to like the idea of all those trips abroad. Maybe if I bring her along once in a while. Company’s already paying for the hotel rooms, right?” He winked at her.

“Look at you, already embezzling like a pro,” she said.

His brow wrinkled, and he took on the faraway look of someone trying to do long division in his head. “Ha, yeah. Anyway. You got anything going on this weekend?”

The thought smacked her between the eyes: the reunion. She glanced down at her dress, then over at the ring on Walker’s thick finger, glinting in the fluorescent light.

“I’m supposed to go to my high school reunion, but…I’m not sure if I really want to go anymore,” she said.

“You should go. Reunions are a blast.” The elevator doors slid open and Walker stepped through. He waved goodbye and grinned at Jackie. “Have fun.”

Oh yeah, she thought as the doors slid closed. After a day like this? Nothing more fun than a trip down memory lane.

A. L. Player teaches middle and high school English in Atlanta, GA. She lives with her guitar-playing, English-teaching husband and their three crazy rescue dogs. Her last name gets about the reaction you'd expect.