Today we should offer you the Runes' review. But the "free time" wasn't something we had these weeks so, instead, we offer you the possibility to win an ecopy of Runes Seventeen-year-old Raine Cooper has enough on her plate dealing with her father’s disappearance, her mother’s erratic behavior and the possibility of her boyfriend relocating. The last thing she needs is Torin St. James—a mysterious new neighbor with a wicked smile and uncanny way of reading her.

Raine is drawn to Torin’s dark sexiness against her better judgment, until he saves her life with weird marks and she realizes he is different. But by healing her, Torin changes something inside Raine. Now she can’t stop thinking about him. Half the time, she’s not sure whether to fall into his arms or run.

Scared, she sets out to find out what Torin is. But the closer she gets to the truth the more she uncovers something sinister about Torin. What Torin is goes back to an ancient mythology and Raine is somehow part of it. Not only are she and her friends in danger, she must choose a side, but the wrong choice will cost Raine her life.


Her eyes widened and her jaw dropped. My grin broadened. I had her.

“Stop being rude and condescending for starters,” she snapped.

I blinked. Not exactly the response I’d expected, but it said something about her. Raine Cooper was no doormat or easily charmed.

“I thought I was being extremely polite,” I said.

She gave an unladylike snort. “Right.”

“Do I need to apologize?”

Her eyes narrowed with a mixture of annoyance and determination and I could swear she wanted to smack me. I found myself waiting for her next move with anticipation. It had been a while since I enjoyed bantering with a woman.

Disappointed that she gave in too easily, I said, “Tell your boyfriend that he and I need to talk. Today. In the next hour if possible.”

“Yes, sir.” She saluted me, her beautiful lips curving into a mocking, but enticing smile.

An insane thought popped into my head. I wanted to capture her smile. Touch her lips and see if they were as soft as they looked. My hand shot out but then I remembered something. I didn’t get emotionally involved with Mortals, yet here I was acting on impulse, letting something I was still yet to understand dictate my actions. The realization was like a douse in ice-cold water. I corrected my aim and touched her nose instead.

“Cute. Nice meeting you, Raine with an E.” I hurried away before I could forget myself and do something I’d regret. Still, I was aware of her eyes on me.

“What’s your name?” she called out.

Ignore her and keep walking. It’s the right thing to do. But the reckless part of me, suppressed for so long, wanted to come out and play.

Slowly, I turned, lowered my sunglasses, and studied her. She was all legs and curves, but what got to me, sucked me was her expression. It was a mixture of innocent curiosity, seductive charm and defiant boldness. I wasn’t here to tango with a snarky Mortal, but this one made me want to change my mind. After centuries, it might be nice to find someone worthy of my time. She might even make this assignment bearable. Of course, knowing she wouldn’t remember me afterwards made her even more appealing.

“I don’t,” she said, her perfect nose up in the air again, “but Eirik will need a name to go with the message.”

“My name won’t mean anything to him. Just tell him the message is from your new neighbor.” Her mouth formed a perfect O as though my news surprised her. Grinning, I dragged my eyes away from her enticing lips. Yeah, living next door to this Mortal was going to be very interesting.

As I turned toward the sidewalk, stickers on the back of the car in her driveway caught my attention.

She was one of them, the reason I was in their little town. Good. That mean I had every reason to up close and personal with her. She was still watching me when I reached my door. I caught her gaze and grinned. 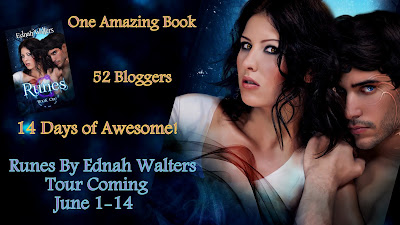 Ednah is the author of The Guardian Legacy series, a YA fantasy series about children of the fallen angels, who fight demons and protect mankind. AWAKENED, the prequel was released in September 2010 with rave reviews. BETRAYED, book one in the series was released by her new publisher Spencer Hill Press in June 2012 and HUNTED, the third installment, will be released April 2013. She s working on the next book in the series, FORGOTTEN. Ednah also writes New Adult paranormal romance. RUNES is the first book in her new series. She is presently working on book 2, IMMORTALS. Under the pseudonym E. B. Walters, Ednah writes contemporary romance. SLOW BURN, the first contemporary romance with suspense, was released in April 2011. It is the first book in the Fitzgerald family series. Since then she has published four more books in this series. She's presently working on book six. You can visit her on her websites, Facebook, twitter, ya-twitter, Google-plus, and RomanceBlog, YAblog.