The only thing stranger than Alexander Graham Ptuiac, accidental quarterback, is the shocking truth about himself and his parents. When truth is stranger than fiction and adults are out to get you, there’s only one thing to do. Play ball! 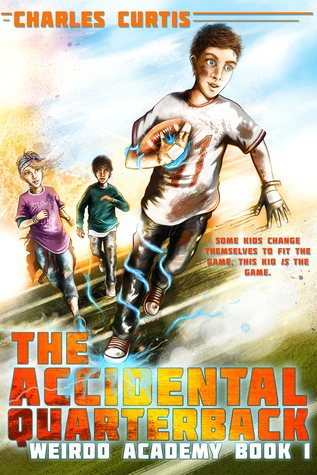 Alexander Graham Ptuiac, the son of an inventor, dreams of playing football. But his dreams are thwarted by his lack of athleticism and overall lanky build. Like any kid with a dream, Alex tries out anyway, just in case. If nothing else, maybe he can win the role of water boy. So when Alex suddenly manifests superhuman powers during football tryouts, Alex can’t believe his good luck.

He’s got game! But his new abilities can get him kicked off the team; unless Alex can keep it a secret long enough to find out how the heck he got this way. Enter Dex, a diminutive classmate who can somehow jump as high as ten feet in the air. Now, Alex isn’t the only one at school with a secret. Except, the boys have caught the attention of some pretty nefarious adults, intent on making sure neither Alex nor Dex make it through the season.

The only thing stranger than Alexander Graham Ptuiac, accidental quarterback, is the shocking truth about himself and his parents. When truth is stranger than fiction and adults are out to get you, there’s only one thing to do. Play ball! 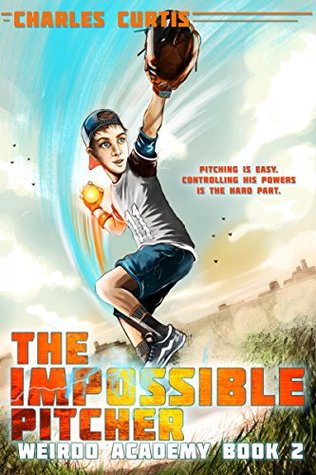 Alex and Dex are local heroes. Suddenly, everyone wants to be friends with Alex, Dex and Sophi.

But someone more powerful than any of them lurks in the background, keeping a close watch until it’s time to swoop in and capture them. Still, Alex tries to maintain some semblance of normalcy — in the offseason, he wants to play baseball. As Alex becomes a formidable pitcher, his powers grow and so does his obsession with controlling them.

With Alex finding less and less time for Dex and Sophi, Dex discovers his cat-like abilities start to disappear soon after he starts spending time with a girl.

As the friends struggle to maintain their friendships, that mysterious someone gets closer and closer. Can the three friends find their way back to one another before it’s too late? Or will middle school tear them apart for good?

1. How was the transition from (sport) articles to children’s stories?
It was both easier and harder than I thought. The easy part was breaking down the action moment by moment, describing what characters looked like and details about their surroundings. That’s what I’ve been trained to do as a sportswriter – to pay attention to everything at a game or during a key moment, beyond just the action on the court or field.

The tougher part was writing a story that I could manipulate and change any way I wanted to. I was so used to sticking to real-life facts that realizing I could do anything in fiction was a bit of a shock. That and pushing through some writer’s block moments, which took weeks to figure out.

2. Tell us something about how Weirdo Academy was created and its history (Strange Things series?).What are your plans for this series?
My parents are both writers who always pitch me ideas. Years ago, during one fateful car ride, my mom mentioned one thought she had: What about a series about vampires playing football? Twilight was super-popular at the time, so I rejected it, but I had a vision of a football player floating up high into the air to catch a pass. If he wasn’t a vampire, then maybe he had superhuman powers instead. And that’s where a series combining sports and special abilities began.

The first installment was originally called Strange Country Day, which is the name of the school the 7th graders attend. But my publisher decided to relaunch with new titles and covers as Weirdo Academy, which I love. Strange Country Day didn’t completely conjure up what the books are really about. As for my plans? The hope is that readers love the series and I keep writing more Weirdo Academy installments!

3. Did and how your own parental experience helped you writing Weirdo Academy?
At certain points, it did. When I reached certain moments that might have crossed the line from middle grade to the more mature young adult genre, I asked myself a question: Would that be something I’d want my son – who’s now three years old -- reading as a sixth grader?

4. After several books and movies, do you think that the mix of magic and sports is still attractive for kids?
I absolutely believe it’s still attractive because sports is magic! Watching a wide receiver make a heading-out-of-bounds one-handed catch while falling backwards seems magical, as does a ninth-inning, two-out, two-strike game-winning home run. So combining the surreal or supernatural with sports works perfectly, especially for kids who are wowed by what athletes are able to do.

5. What are the ingredients that make a children book successful?
The books that spoke to me as a kid were page-turning adventures that were also written as if the author was my age, which is a tough thing to pull off. The adventures don’t necessarily have to be fantasy or science fiction – some of my favorite books were grounded in reality. And capturing the voice, coming-of-age angst and the struggles that come with being young always helps a reader identify with the characters.

5. What are, in your opinion, the responsibilities of a children stories author?
The biggest responsibility is to be genuine. I found as I was writing both Weirdo Academy books that I never wanted to talk down to my readers or to feel like I was hammering them over the head with a lesson, although there are some moral questions brought up at certain points throughout the first two novels. As I mentioned above, the most successful children’s books feel like a fellow kid speaking to you.

About the author:
Charles Curtis a sportswriter for USA Today’s For The Win. He has reported and written for other publications including ESPN The Magazine, ESPN.com, Bleacher Report, NJ.com, TV Guide and Entertainment Weekly. He lives in New York City with his wife and son.

This looks like it might work for my nephew. Been looking for a new series for him.