enemies lurk around every corner - Ignited by A.M. Deese

A NOBLE DAUGHTER.
A FORMER SLAVE.
DARK MAGIC AND VOLATILE ALLIANCES COLLIDE IN A WORLD ON THE BRINK OF COLLAPSE. 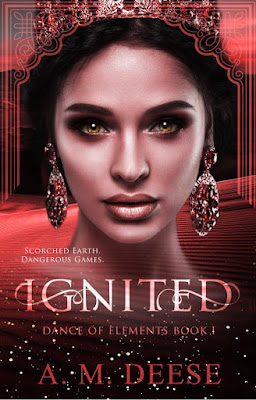 DARK MAGIC AND VOLATILE ALLIANCES COLLIDE IN A WORLD ON THE BRINK OF COLLAPSE.

Juggling death is nothing new for seventeen-year-old Jura, daughter of the First of the Thirteen, successive rulers of the Republic of the Sand Sea. However, when a blood chain ensnares her father, she is thrust into the seat of power and forced to rule her elders.

Jura must track down her father’s assassin and balance a country on the verge of collapse. To find the Prince of Shadows and uncover the truth, Jura puts her trust in Tylak, a former slave accused of stealing from the Everflame—a man she once condemned to death.

In a world where water is currency and enemies lurk around every corner, Jura will use her wits or risk igniting a world war.

About the author:
Alexis Marrero Deese is an avid reader of young adult and fantasy. Her favorite authors include Brandon Sanderson, Jaqueline Carey, and Orson Scott Card. She graduated from the University of South Florida with a Bachelor’s Degree in Creative Writing and a sun tan she misses dearly since her move to northern Georgia. She has a passion for cooking, spends entirely too much time on Pinterest, and is a self-proclaimed dog training expert to her family’s legion of dogs.

I've often gone out with my clothes on back-to-front or inside-out. At least her robe wasn't caught up inside her undies!

Beautiful book cover! Also, I enjoyed reading the chapter one excerpt! Looking forward to checking out this book!