a murderer on the loose - Canal Days Calamity (A Dog Days Mystery #2) by Jamie M. Blair

"Settle back for an amusing read on a dark and stormy night. The second book is the Dog Days series will keep you turning pages as Cameron Cripps-Hayman manages to get herself in plenty of trouble." - Betty, Goodreads 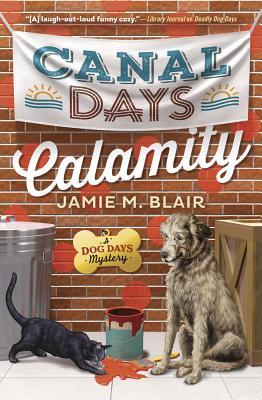 Cameron Cripps-Hayman is taken aback when she stumbles upon another murdered neighbor, this time behind her sister’s shop, Dog Diggity.

The timing couldn’t be worse, as there’s only a week left before the store’s grand opening during Canal Days, the biggest festival of the year.

When the police arrest her handyman, Cameron knows they’ve got the wrong suspect, so the Metamora Action Agency sets their sights on cracking the case. With one solved murder under their belts, how hard could a second be?

With a flood warning and a murderer on the loose threatening the start of Canal Days, can Cameron and her crew save the town’s annual dog and pony show from being canceled?

New to the historic town of Metamora, Indiana, Cameron Cripps-Hayman is looking to make friends with her neighbors. What she isn’t looking for is one of their bodies floating in the canal.

When she and her estranged husband, the town sheriff, are both named suspects for the murder, Cameron takes solving the crime into her own hands, teaming up with her eccentric co-workers who dub themselves The Metamora Action Agency.

As if hunting for a murderer with two high school geniuses, the town drunk, and an elderly kleptomaniac isn’t hard enough, Cameron adopts the five mangy guard dogs of her deceased neighbor. But maybe a stint at playing gatekeeper is just what she needs to come face-to-face with the killer and save another neighbor from being the next victim.

About the author:
Jamie Blair (Ohio) is the award-winning author of young adult and romance books, including Leap of Faith (Simon & Schuster, 2013) and Lost to Me. Visit her online at: