The Coupling (The Letting #2) by Cathrine Goldstein

Prepared to make the ultimate sacrifice to save those she loves most, Ronnie devastates Phoenix with her impossible decision. Whisked away from her rebel life to another world ravaged by despair, Ronnie meets her greatest nemesis...her biological father. 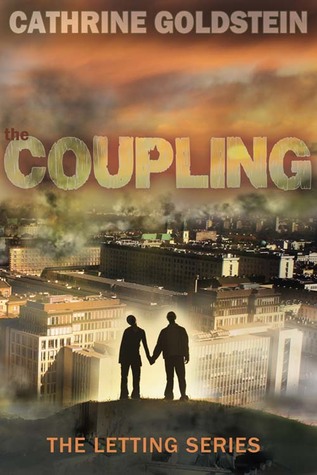 In Ronnie Billings’ dystopian world, surviving the Letting and breaking free of a corrupt government is less of a surprise than falling in love with Phoenix Day, the leader of the Peaceful Revolution…

When the government sentences Ronnie to a Coupling under the guise of producing a coveted blood type, Ronnie discovers the one she’s slated to Couple with expects even more.

Prepared to make the ultimate sacrifice to save those she loves most, Ronnie devastates Phoenix with her impossible decision. Whisked away from her rebel life to another world ravaged by despair, Ronnie meets her greatest nemesis...her biological father.

Steeling her nerves against the dangers of escape, she embarks on the perilous journey back. She is convinced she belongs with Phoenix and his revolution, but will her friends, and especially Phoenix, be ready to accept her when she returns? Because this time, evil is in her blood...

What if the Devil doesn’t know he’s the Devil?

This is the question Veronica “Ronnie” Billings poses to Phoenix, her sworn enemy, the leader of the Peaceful Revolution, and the one she loves.

Kidnapped by Phoenix’s rebels, Ronnie learns how wrong she has been. She had no idea that her patriotism was wasted on a corrupt government. Ronnie was proud to be a Leader; taking hundreds of harvested girls to the Letting facility. After all, she was saving them from future Couplings and bringing them to the safety of the New World. Or so she thought…

Confused, Ronnie realizes the only way to discover the truth is to trust her heart. Together, Phoenix and Ronnie devise a plan to stop their corrupt government and preempt the dangerous rebel coup which is approaching. But when their plan goes awry, will Ronnie be strong enough to save Phoenix, her country, and herself?

About the author:
Given my love for cities and all that is gritty, my new obsession with trees really has me stumped. (Sorry.) Maybe it's because trees are the inspiration behind my new YA/NA novel, THE LETTING.

Whatever the reason for my new infatuation, some things remain constant -- like my love for: coffee (although sadly, it's now decaf); yoga; Luna bars (I am petitioning for them to bring back Chocolate Raspberry!); running in my neighborhood; Hemingway; Bukowski... and, above all, my husband and my girls.

I am the author of the bestselling novel, Sleeping With Mortals: The Story of a New York Mistress, and I'm also a playwright. I have my B.A. in English and my M.A. in Theatre.

Thanks so much for featuring THE COUPLING Book Tour and Giveaway on your always amazing blog! Thanks!

Sounds like a fantastic read. Thanks for the giveaway!

Thanks for the post introducing us to these fantastic books!

Love the sound of these books!

Glad to see there's a strong female lead in the book :) Hope to read this soon!

these look like awesome books. Looking forward to reading them.

I have read some great reviews about this book, so I am really anxious to read it.

Thank you all for your interest in THE COUPLING! And thanks for connecting! I really appreciate you stopping by!

Great blog , love the contest , thank you for the chance to be entered