She was free. - Rising Ridge by Alexa Jacobs

"She loved him as a teenager, and it wasn’t until she found herself in his arms again that she realized how deep that love went. He was it. He was the love of her life, but sadly for her, she was not the love of his. As tears slipped down her face, she looked at him sleeping quietly. She would love him forever. And even a day after that. She had to get away. It wasn’t fair, to her, to the abyss she felt in her chest. She just had to get out of town, and she wasn’t sure if she’d ever be able to go back." 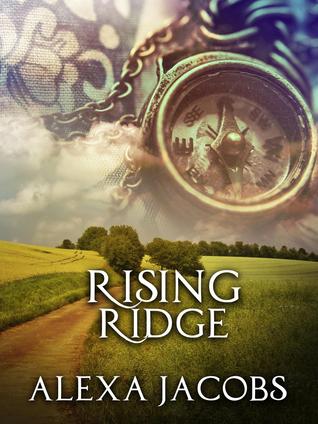 Twenty years old, living in New York City, and having absolutely no idea what she wanted to be when she grew up, every day would be an adventure, or at least that was the plan. When a phone call from her brother lands her back in her home town, and dealing with an unexpected tragedy, she comes face to face her brother’s best friend Dean and realizes that the feelings she had buried long ago were still there.

Dean Winston has lived with the fact that Olivia walked out of his life two years ago, and was never coming back. With her back in town, he struggles to be the friend that she needs him to be, and not the lover that she once wanted him to be.

With lines between childhood friends and secret lovers once again blurring, Olivia must decide between the possibilities of her future and the ties of her past.

Some strings just refuse to be cut.
EXCERPT

They sat in silence for a while. Dean was good at that; he had always been good at that. At first, Olivia was so thankful for it. Her parents were always talking at her. What to do, where to go, what to wear. Their pursuit of the perfect children seemed relentless. Connor had always wanted to just help her do the things they asked her to do, and Elle was ready at a moment’s notice with an escape from life plan. Somehow, whenever she was looking for something that fell in the in-between, Dean was always the gentle hand holding her steady.

Now, the silence was maddening. Somewhere along the line, she realized he would always be there for her if she reached out to him, but she wasn’t sure he really wanted to be. She made him that. Just like her parents, she gave him a role he did not ask for and that does not fit.

What frustrated her, what caused the abyss of silence between them, was she knew if she reached for his hand right now, he would take it. If she laid her head on his shoulder, he would rest his head on hers. If she put her hand on his chest, she would feel his slow and steady heartbeat begin to quicken and lose its pace. She put him in the role she wanted him to fill, but he let her. It was moments like those when she wasn’t sure if his were the arms she would be safe in, or if they were the arms that would dance her to the furthest edge of a cliff and then let go. She hated herself for the itch she felt in her fingers to reach out for his hands, only inches from hers, and she hated him because she knew he would allow it if she did.

Two years. She had put two years and a few hundred miles between them, and it was all for nothing. She had fooled herself into thinking that she was over him and had moved on. She didn’t think of him in her life in New York. It was true that she had not dated, but she was giving herself time to get to know the Olivia who had never gotten a chance to live. She was happy there, and had the promise of everything she had ever dreamed of. She looked at him as he sat silently looking at the stars, and realized she had never gotten over him. It was just a room in her heart where she had turned off the lights and closed the door. It was still there, in the darkness, as big and complicated as it had always been.

Alexa Jacobs was born and raised in the suburban outskirts of Baltimore, Maryland. She met her husband through friends in high school, and began what turned out to be a short lived career in the financial industry. With her first child, she became a stay at home parent and threw all of her energy into becoming the queen of Pinterest before Pinterest was a thing.

When her second child headed off to kindergarten, Alexa thought that it was time for a career change.

After a decade with at least one child underfoot 24 hours a day, it was time for her to discover who she was going to be when she grew up.

Turns out, she was a mom who sat by the window and cried the entire day on that first day of “freedom” from early parenthood.

A few months, and many kindergarten volunteer days later, she sat down at the computer and dusted off the rough draft of a story she had crafted years ago. That draft turned into her debut book, Rising Ridge.

Alexa is a member of the Romance Writers of America, and participates in many writer circle groups.