You’re born. You live. You die.

She has no cause to believe that equation works differently for her, but there has to be a reason the world treats her like a pariah.

Finally, Allie has a real shot at normal and rides that high right up to her sixteenth birthday when she wakes in agony—an experience Aidan insists they have all faced. She struggles in ignorance, uncertain of what is real and what isn’t. When she emerges, Allie is different. She has always been different, but even among her extraordinary friends, she and Aidan are special.

As Allie struggles to maintain her tenuous grasp on the power that threatens to overwhelm her, she worries she will lose herself in this strange new world. A dangerous world where she will have to fight tooth and nail to defend the power and freedom that is her birthright.

…only Allie hates to fight.

Alienated by everything that sets him apart, Aidan McBrien suffers in silence.

He is the most powerful Immortal of his generation, but he chooses to live behind a mask to protect himself, even from those he loves. They can never know how much he struggles just to get through each day, overwhelmed by the pain and loss of everyone around him. As he fights a constant battle to control the gifts that threaten to push him over the edge, he dreads the day his world will look to him to fulfill a prophecy that he doesn’t even believe in.

As Aidan’s equal, Allie Carmichael endures the same isolation, but in complete ignorance of her true nature. When she meets Gavin, Allie sees a tiny glimmer of the life she wants to live, and the person she wants to be, but her instincts tell her it will never work.

Allie and Aidan have led parallel lives on opposite ends of the earth, but their paths are about to converge. With others making decisions for them, will they ever truly understand the immeasurable power they posses, or the prophecy that might not be about Aidan after all?

...I have to get out of here! She needed fresh air. Needed to clear her head. To think. She struggled out of his arms and shakily rose to her feet. The room swirled as nausea threatened to overwhelm her. She stumbled for the door. The wind whipped her hair around her face. The sky was an eerie red with strange clouds. The storm she’d dreaded for weeks was closing in on her.

“Allie! Stay with me!” Aidan’s voice echoed weirdly. She felt the sting of his slap to her cheek. But then she was running, her heart pounding in her chest. Allie stumbled on the path through the woods along their favorite running trail, where they first met. The gusting wind stirred the trees, but did nothing to alleviate the burning fever blazing hot inside her core.

It’s a nightmare. I’m back in Aidan’s warm bed having a scary dream. She tried convincing herself with a pinch. Nothing. She was still running. Someone chased her. The sensation was familiar. Just like the morning she met Aidan. He pursued her now, but this time she saw his face and it frightened her. He was a stranger. His friendly brown eyes were cold and hard, with a shifting golden light reflected in their depths. She ran faster as the perversion of Aidan closed in on her. The lake at her right, and the dense forest at her left, she had no escape. The storm had her now.

The spike of pain drove into her skull and she stumbled to the ground, spewing the contents of her stomach. Early morning fog swirled around her, hiding her from sight. Allie’s hands fisted in the rich soil. It called to her somehow. A burst of sunlight shone through the clouds and it lifted her soul. Her body churned and shifted, but the pain of it held her rooted where she crouched. Tilting her face to the sky, the sun warmed her and gave her the strength to face him. He would find her soon and she would be ready.

She stood her ground, her face twisted in anguish, forever frozen in that moment of transformation, her body stiff and immobile, but still a raging tempest within. She saw Aidan now—his expression full of loss and regret. He did not catch her in time. Her metamorphosis complete, she had escaped him. Lifting her arms to the sky, she felt one moment of sweet relief and then the fiery red clouds consumed her.

“Allie, I know you can hear me!” His voice came to her now, full of concern. This was her Aidan, not the monster that chased her. “Don’t resist me.” She felt his hands encircle hers, but she was lost in the darkness, no longer in the forest. She drifted.

Allie screamed. Her eyes flew open wide and she caught Aidan's worried gaze. It was a raw moment of stark reality. She was back in his bed, but she was sweaty. The sheets twisted around her body as if she’d thrashed around for hours. Her mind worked rapidly, attempting to take in everything at once. It was too much. The jackhammer reverberating through her brain made it impossible to focus.

“Take a deep breath.” Aidan reached for her hand. “You have to stop resisting. It will only—”

It has to be a nightmare! Please! Just let me wake up! But deep down, she knew it wasn’t a dream. Whatever was happening, she’d known it was coming; had anticipated it for weeks.

Her eyes widened with fright, but she was finally lucid... 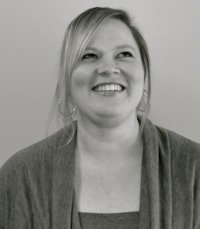 Melissa A. Craven (the “A” stands for Ann–in case you were wondering) was born near Atlanta, Georgia, but moved to Cleveland, Ohio at the age of seventeen. She still thinks of Cleveland as home, so it was only natural for Emerge to take place there.

Today, she is back in Atlanta–for some reason she can’t seem to stay away from the ungodly heat that makes her long for things like “lake effect snow” and wind that will knock you flat.

Melissa decided a long time ago that the “life checklist” everyone else was clutching so tightly in their fists, just wasn’t for her. She does everything backwards because she is weird like that, but then, she is an artist and artists are notoriously “unique” and “quirky.”

She is an avid student of art and design, and received her Bachelor of Fine Arts from the University of West Georgia in 2009. She worked as an interior designer for several years, but she’s always thought she might like to be a writer when she grows up.

In her spare time, if she has any, she enjoys shopping for derelict furniture she refinishes to exercise the interior design part of her brain.

Thank you for hosting a stop on my tour. This excerpt is one of my favorite moments from Emerge.

Your books sound very interesting and I look forward to reading them.

Great post! I really enjoyed reading the excerpt and learning about these two books! These books sounds so interesting! Also, I really like both book covers! Very intriguing!

I've added this book to my book wishlist, and can't wait to read it.