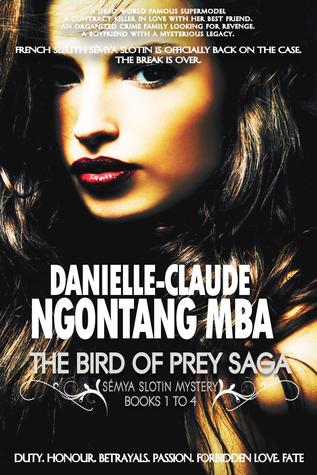 A dead world famous supermodel.
A contract killer in love with her best friend.
An organised crime family looking for revenge.
A boyfriend with a mysterious legacy.
French sleuth Sémya Slotin is officially back on the case. The break is over.

“I’m Semya Slotin, yes this Slotin. I love wine, vodka, absinthe, my younger brother Aaron and my best friend Polliannah, in no particular order. When Josh Heinz and I are not too busy fighting or tearing each other clothes off, I solve mysteries. And I’m really good. I’m really good at a lot of things and people usually don’t see me coming… but here I am and I’m not going anywhere.”

It all started with a simple case…

Book One: Bird of Prey
Who killed the infamous supermodel Johanna Cartier?

After spending three years away from sleuthing, Sémya Slotin is thrown back in the business when she found her body. With the help of her best friend Polliannah Koch, DCI Ally Gibbons and the mysterious but extremely sexy Josh Heinz, she vows to see this through.

Book Two: The Plot Thickens
What happened while Semya Slotin and Josh Heinz were busy solving Johanna Cartier’s murder in Bird of Prey?

When Polliannah met John Allen, she thought that she had finally found her Prince Charming. When John set his sights on Polliannah, he knew that he had a job to do and that the beautiful Miss Guryev should only be a means to an end. Then they fell in love. Now he and his Russian Princess had to leave London for their safety. But it may already be too late…

“I’m Polliannah Koch Guryev, yes I’m part of the infamous Guryev family but you can call me Polli or Mrs Allen. I love my parents, some of my brothers, high-end shopping, Russian vodka and last but not least my worst half and partner in crime Sémya Slotin. When I’m not managing our wine store in Chelsea or committing some kind felony with Sémya in the name of the God of Sleuth, I dream of Prince Charming. I’ve kissed enough frogs to give up on love but somehow it doesn’t seem to want to give up on me. How many times do I need to get hurt before it does? But still, here I go again…maybe this time it would be the last.”

Book Three: Polliannah Got Married!
The truth this time, and nothing but the truth…

Polliannah is in trouble and her boyfriend is dead. Nothing’s prepared Sémya, Detective Extraordinaire, for what she finds in Toronto. Polliannah is a widow and her late husband John Allen was a hit man for the powerful Dovos family. What did they want from her? Why is this happening to them? Josh Heinz knows more than he lets on, but he’s not telling her anything. Old conspiracies and secrets resurface putting them all in peril. Sémya’s worst fears about her relationship with Josh and his past are confirmed causing a rift between that may never heal. Sémya and Polliannah’s world is falling apart. Will they be able to come out of this stronger?

Book Four: Vincent Mallory Edgerton
Every love story has a beginning.
From the moment their gazes locked, Sémya and Vincent sealed their fate.
Sémya Slotin had been coasting through life solving one mystery after another. While investigating a friend’s disappearance in Hawaii, she met Josh Heinz. Her mind kept telling her to stay away from the handsome stranger but he awakened something in her and she was unable to resist him. Vincent Mallory Edgerton had always been an efficient FREGG operative. He loved his job, even when he had to leave everything behind for his own safety. On his last assignment, he was forced to work covertly with the sexy bold sleuth. Sémya’s beauty and intellect enthralled him, but his passion and growing love for her also changed him. There was nothing he wouldn’t do to finally win her trust and keep her safe, causing him to unleash events that would shape the rest of their lives.


Sémya Louise Slotin was staring at Josh Heinz talking on his mobile and sighed for the third time. Once again, he was keeping her in the dark and she hadn’t felt this helpless in years. No, it wasn’t even that. She was desperate and she hadn’t felt like this in a long time. That helpless desperation that took her over each time she knew she couldn’t control a situation.

The first time she felt this way was after her birth mother, Corinne Durante, told her that she was dying. Her mom had always been honest with her, but at eight when you learnt that your only parent was going to die of AIDS, a then relatively unknown illness, wouldn’t you become desperate too? Then there was the time when her adoptive mother, Annika Slotin, was accused of the murder of her creep of a husband, Martin Demeure. She knew that her mother was innocent but she was just fifteen and no one listened to a fifteen-year ago teenager; even if her IQ was three times higher than average. For both of these events she had an anchor, her safe harbour, her Russian princess, her Polliannah.

So it was smooth sailing for a while until one night her anchor called her. She was scared and for the first time, Polliannah was the one who needed her help and support. Sémya dropped everything and took the first flight to Moscow. She had never felt as desperate and helpless as she was that day. She was only twenty-two, but she needed to be strong for them both. They packed up everything and left Europe for new horizons, new adventures, new encounters and new mysteries to solve. That was what Sémya had been known for, solving mysteries. And when she wasn’t sleuthing, they kept each other safe from bad men, wrong men, and stupid men.

It was just the two of them until Josh Heinz came into their lives three and a half years ago. After the Hawaii fiasco, which she scarcely remembered, Sémya and Polliannah went back to Europe; with Josh. They moved to London; where Josh was. They settled in Camden Town; across the street from Josh. There, Sémya had spent nearly every night… with Josh. Josh, Josh, Josh… the handsome and sexy Josh Heinz. The secretive and mysterious Josh Heinz. The guitarist with a suave voice Josh Heinz. Josh, Josh, Josh… Josh, who stated that he loved her. Josh, who said that he wanted to protect her. She sighed for the fourth time and headed to the closest kiosk.

This time she failed her. After eight years of taking care of each other, of dodging every bullet in the name of love, friendship and family, she failed Polliannah. They received the scariest call from her, she was crying. Her new boyfriend John had been killed and she thought that she was next. So Sémya felt helpless and desperate again. She lost control of the situation, control of their lives. She was angry. Anger usually followed. She and Polli lived a quiet life in London. Who would want to harm them? One thing for sure, Josh knew and as usual, he wasn’t talking. But they would see about that.

Goodreads ** Smashwords ** Amazon ** Barnes&Noble ** iTunes ** All Romance
About the author:
I’m over 30. ** I was born in Quebec City, Canada. ** I grew up in France and in Gabon. ** I speak English & French fluently. ** Pizza is my favorite dish. ** Black Forest Cake is my favorite dessert. ** I met Michael Jackson when I was eleven. ** I loathe vodka but love gin, wine and tequila. ** I’m obsessed with Robbie Williams and Michael Fassbender. ** I call Toronto my home. ** I love reading. ** I love dancing. ** I love watching exciting TV shows. ** I love my life… most days. ** I’m a major goof. ** I can’t stand intolerance. ** I’m curious, cheeky and oh so opinionated!