Guest Post and Giveaway: Citadel of Fire (The Ronin Saga #2) by Matthew Wolf 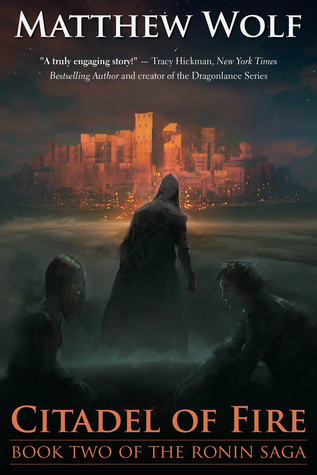 Seventeen-year old Gray is descended from a legendary hero known as a Ronin, and haunted by his forgotten past. He returns home to a wizards’ keep, unaware he is now labeled a murderous traitor for killing his best friend.

Returning could be a death sentence, but the journey alone is perilous. Along the way, Gray discovers he has a grandfather. Now he must reach the city before his only living family dies beneath a madman’s torture. Getting there will be a challenge, however, as an enthrallingly unpredictable woman, a dangerous desert, and a horde of thieves stand in his way. Wielding the banished power of wind, Gray rallies against the poisonous evil that seeks to convert the world to their mantra, “strength is life, weakness death.”

Yet with an affable scoundrel and a clever bookworm at his side, Gray discovers the world’s greatest secret… He is not the only one with hero’s blood, and the legend of the Ronin walk the world once again.

The world of the saga takes place in a medieval milieu, however, the story of the Ronin is very much the story of nine Samurai—prideful warriors who value sacrifice, duty, and servitude above all else, for the word Samurai literally means “to serve.” Of course, warriors across all ages and all cultures have systems that emphasis the need for honor and servitude, and truthfully, on the surface, the Ronin don’t even look very Japanese. Though they all wear garb similar to traditional Samurai—kimono-esk bottoms, but less layers, and a long thin, sleeveless coat—their resemblance ends there. Their swords are a mix of claymores look-alikes, katanas, broadswords, sabers and more. They hail from all parts of Farhaven, have different skin colors, but at their heart they are “wandering Samurai” which is where the term Ronin comes from. Their ‘lost’ or ‘wandering’ nature is the essence of a Ronin. They are too powerful, too different, lost in a time that needs them but does not entirely know how to accept them or how they fit into the fabric of everyday mortals—yet they are bound to serve humanity, to ensure peace and equality while never truly having an equal of their own.

As far as the research I did, I took six years of Japanese in college, but also several years of Old English. I was also influenced by the film the Seven Samurai. It was also adapted to a western version that we know as The Magnificent Seven. However, Le Morte de Arthur influenced me as well—Lancelot, King Arthur, Guinwevere, Merlin, and more. The Ronin end up being a blend of these two stories and cultures, yet with a unique added flair: that of anime. The hierarchy of power between the Ronin and the rest of the world, and even between each Ronin, is very anime-esk. Who is the most powerful? How do they gain more power? We can see their training directly reflects their strengths. They unlock new abilities every time they train, and while there are huge flaws in their powers like a diamond ready to crack, their limits seem inexhaustible.

The Ronin are a blend of old and new, like a teabag that’s half ancient green tea leaves and a zest of fresh anime-lemon. To unveil who the truly Ronin are, however, is to uncover the world’s greatest secret.

TOUR SCHEDULE
Goodreads ** Amazon ** Barnes&Noble ** Book Depository
About the author:
Matthew Wolf is the author of The Ronin Saga. Or maybe he's a Ronin. Either way, he's involved somehow. Aside from epic fantasy, he enjoys woodcrafting, outdoors, a bit of a health nut (Kale is good!), and trains in kung fu.

His childhood of traveling the world and studying Old English and Japanese influenced the schemes of the Saga, and the world of Farhaven. He is a graduate from UCSB with a Literature degree and a specialization in Medieval Literature and Japanese. His novels include THE KNIFE’S EDGE, and CITADEL OF FIRE, of the bestselling YA Epic Fantasy series, The Ronin Saga.