Some killers are born. Others are made... Fool Her Once by Joanna Elm

Joanna Elm masterfully unwinds the plot, letting readers in on the truth gradually until they realize the mortal danger that Jenna faces, even before Jenna herself comprehends the shocking truth. Fans of crime thrillers will love FOOL HER ONCE. I look forward to more Joanna Elm novels!" Susan O., Goodreads 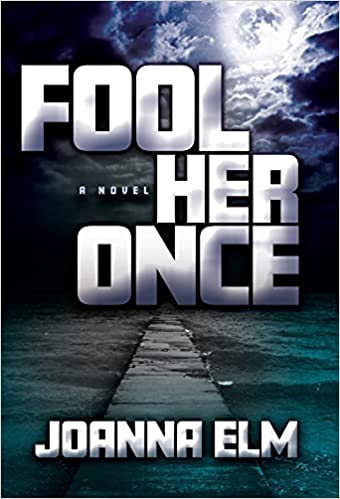 Description:
Publication Date: March 1st 2022
Some killers are born. Others are made.
As a rookie tabloid reporter, Jenna Sinclair made a tragic mistake when she outed Denny Dennison, the illegitimate son of an executed serial killer. So she hid behind her marriage and motherhood. Now, decades later, betrayed by her husband and resented by her teenage daughter, Jenna decides to resurrect her career—and returns to the city she loves.
When her former lover is brutally assaulted outside Jenna’s NYC apartment building, Jenna suspects that Denny has inherited his father’s psychopath gene and is out for revenge. She knows she must track him down before he can harm his next target, her daughter.
Meanwhile, her estranged husband, Zack, fears that her investigative reporting skills will unearth his own devastating secret he’d kept buried in the past.
From New York City to the remote North Fork of Long Island and the murky waters surrounding it, Jenna rushes to uncover the terrible truth about a psychopath and realizes her own investigation may save or destroy her family.
GUEST POST
Domestic Thriller

The danger in domestic thrillers comes from a person that the female protagonist knows, or  thinks she knows; someone with whom she is in a relationship. This person can be a bad spouse,  bad boyfriend, bad employer, bad mother, bad mother-in-law—even a bad child.

For example, in Big Little Lies, the hugely successful TV series based on Liane Moriarity’s novel  of the same name, the biggest dangers facing the female protagonists are to be found inside their  beautiful multimillion dollar waterfront homes.

Indeed, the most chilling (and therefore the most popular) domestic thrillers are those that pit  husband against wife—for what is more chilling than finding out you don’t really know the  man/woman who is sharing your bed.

However, even though she defined what a domestic thriller is, Julia Crouch did not invent the  subgenre of domestic thriller. Neither did Gillian Flynn, as many believe she did, with her  stunning 2012 novel, Gone Girl.

Think instead of classics like the 1938 bestseller Rebecca by Daphne DuMaurier, where  Rebecca is the dead first wife who threatens the unnamed narrator’s marriage and happiness  because the narrator believes her husband, Maxim, still adores that first wife, Rebecca. But what  the narrator doesn’t know about her husband—and doesn’t find out until the very end—is a far  grimmer truth.

Then there’s the 1957 Patricia Highsmith domestic thriller, Deep Water. Highsmith, who created  some of the most brilliant psychopaths in literature (Tom Ripley), depicted a marriage where we  feel almost from the beginning that husband Vic is a psychopath, or at the very least, a sociopath,  but we don’t really know what wife Melinda is capable of until well into that novel. Interestingly, Gillian Flynn stated in one interview that Deep Water was an inspiration for Gone Girl—as Gone Girl was an inspiration for my own thriller, Fool Her Once.

The dread and anticipation in reading a domestic thriller relies to a great degree on the reader  knowing there are big red flags surrounding the actions of certain characters who are close to the  female protagonist. Very often, the reader can see through the husband/boyfriend (Behind Closed Doors by B. A. Paris; Every Vow You Break by Peter Swanson) or the mother (Sharp Objects by Gillian Flynn) before the protagonist can. So then, there’s that awful moment similar to the one in horror movies where the viewer goes: “No! Don’t open that door! Don’t step outside!”

In the beginning of my new thriller, Fool Her Once, Jenna Sinclair, the female protagonist, sets  out on a search for the man she outed as the secret, illegitimate son of an executed serial killer.  Because of certain bad incidents happening as the book opens, she believes that a couple of  decades after her exposé he is still out for revenge and now wants to harm her daughter as well.

But, in the undercurrent of Fool Her Once, and then forefront from about a third of the way in,  there is a niggling feeling that Jenna faces more of a threat from her husband, Zack, who is very, very unhappy about Jenna’s search for the serial killer’s son.

Zack, an innkeeper and marina owner on the North Fork of Long Island who was there for Jenna  when her career and personal life crashed following the exposé, knows that Jenna is about to dig back over the last 20 years. Now, he is terrified that during her investigation she will stumble onto his own particularly nasty, devastating secret.

When the reader finds out—before Jenna—what that secret is, the reader will realize that Jenna  faces a greater threat in her own home.

What will she do if she uncovers her husband’s secret during her search into the past? What will  her husband do to Jenna, his wife of 16 years, when he discovers that she knows the truth about  him? How can any of it end happily?

These are questions at the very heart of domestic thrillers like Fool Her Once. 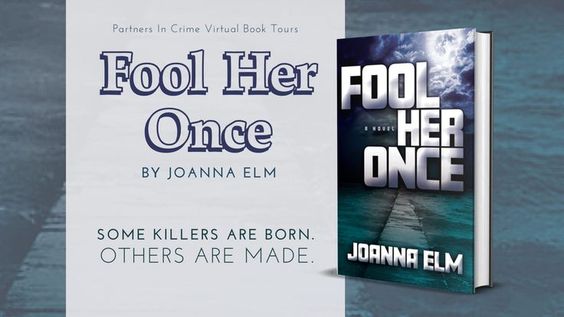 About the author:
Joanna Elm is an author, journalist, blogger and an attorney. Before publication of her first two suspense novels (Scandal, Tor/Forge 1996); (Delusion, Tor/Forge/1997), she was an investigative journalist on the London Evening News on Fleet Street in the U.K. She also wrote for British magazines like Woman’s Own.
Then, she moved to New York where she worked as a writer/producer for television news and tabloid TV programs like A Current Affair. She was also the researcher/writer for WNEW-TV’s Emmy-award winning documentary Irish Eyes. In 1980, she joined the Star as a reporter, eventually becoming the magazine’s news editor and managing editor before moving to Philadelphia as editor of the news/features section of TV Guide.
After completing her first two novels while living in South Florida, (Nelson DeMille described Scandal as “fresh, original and unpredictable”) Joanna returned to New York, enrolled in law school, graduated summa cum laude, passed the NY Bar exam and worked as principal law clerk for an appellate division justice in the prestigious First Department. She has been married to husband Joe for 35 years, and has one son.
Website ** Goodreads ** BookBub ** Instagram ** Twitter
Author's Giveaway
Posted by CCAM at 4:30 AM