In book 2 of the Holoquest Fantasy Series, Boston and Jason return with another action-packed, romantic adventure. Boston’s Questwill electrify your imagination as you experience elves, dwarfs, trolls, priests, vampires, and demons as you’ve never experienced them before. 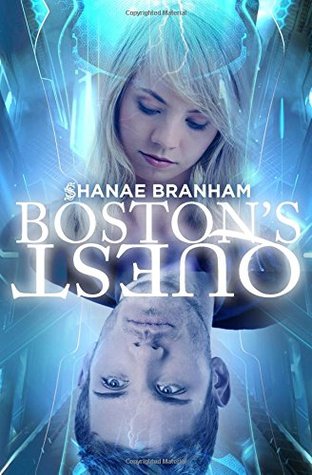 The external drive containing the information for building a hologram machine is stolen and sold on the black market. Now someone has connected a new hologram machine to the Internet, forcing people to fight for their lives in an online fantasy game. Trapped inside this deadly scenario, seventeen-year-old Boston Manning learns that her weakness for tolerating abuse is stopping her from unlocking her elven powers. Can she overcome her character flaw or will she die trying?

In book 2 of the Holoquest Fantasy Series, Boston and Jason return with another action-packed, romantic adventure. Boston’s Questwill electrify your imagination as you experience elves, dwarfs, trolls, priests, vampires, and demons as you’ve never experienced them before.

"I love the intensity of this book - I definitely didn't want to put it down. But I also love the themes that run through this book: loyalty, looking past fears, standing up for yourself, standing up for others, and helping others out even when you have to sacrifice something yourself." - Goodreads, Alisa


GUEST POST
What kind of Mythical Creature would you be?

One of the most fun parts of writing the Holoquest Series was deciding what mythical creatures to use. Book 1, DiSemblance, is a prequel book where the hologram machine and main characters are introduced. Books 2-4 create an online-fantasy world using the hologram machine. In Book 2, Boston’s Quest, the main female character is kidnapped and forced to choose what creature she will become before she is thrown inside the online-fantasy world to fight for her life.

I spent a lot of time researching Boston’s Quest by playing different computer games. One of my favorites is World of Warcraft. I felt it was important to have the powers of the creatures my characters choose match up with their character traits. I choose an elf for Boston because of her natural ability to nurture and love the people around her. It was fun to write what having elfin powers would be like. Boston’s Quest is basically an engaging set-up book for the actual quest that comes in Book 3 (which I am in the process of writing) so don’t be surprised by the cliffhanger with which it ends.

I am a professional writer with a bachelor's degree in creative writing and a minor in grammar. I have also attended several years of classes and workshops in screenplay writing at the Los Angeles Screenplay writer's Expo.

I love suspenseful, action-adventures and clean, young adult, romance stories. I was born and raised in a small town in Idaho. I am the second out of six children. When I was in my early 20's my mother was killed by a drunk driver. This one incident drastically changed my life. I have always had a passion for reading and writing fiction. Owing to a life long struggle with Dyslexia, early teachers discouraged me from pursuing a career in writing.

As I have spent over twenty-five years transforming my language disabilities into professional writing skills, God has honed my insatiable passion into an incredible vision.