Holly Partridge had no plans to return to Willow Park, Illinois, until her troubled younger sister Portia fled her home and aimed herself straight at Holly's high school nemesis--too-gorgeous-to-be-true Josh Hunter. Riding a manic bipolar high, Portia's only a danger to herself, but Holly needs to find her before she crashes. That means asking Josh for help. 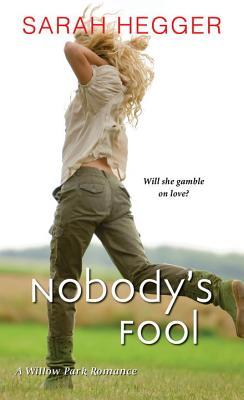 In Sarah Hegger's latest Willow Park Romance, long-held crushes and past frenemies reunite--and wonder if there's ever a second chance to make a good first impression. .

Holly Partridge had no plans to return to Willow Park, Illinois, until her troubled younger sister Portia fled her home and aimed herself straight at Holly's high school nemesis--too-gorgeous-to-be-true Josh Hunter. Riding a manic bipolar high, Portia's only a danger to herself, but Holly needs to find her before she crashes. That means asking Josh for help.

The ultimate love 'em and leave 'em lothario, Josh was never good for anything but a broken heart. But now he's lending a hand when Holly needs it most--and revealing surprising generosity and compassion. Has Josh shed his bad boy ways? Or is Holly suddenly grown up enough to acknowledge her own mistakes? Trusting Josh could be a disaster--or the first step in banishing the past to make way for a future happier than Holly ever imagined. .

Oh, I do like this topic, I surely do—almost as much as I like a lovable bad boy.

Let’s pause a moment here, while visions of book boyfriends dance in our heads, and consider that word lovable. It rules out all the pyscho, abusive, misogynistic, stalking and controlling asshats.

Back to visions of book boyfriends. I spent a lovely few moments (okay, hours) here considering all the bad boys I like and what makes me melt.
Ingredients:
A large dollop of attitude
A pinch of arrogance
One smoking hot bod
A large serving of humor
Several naughty eye twinkles
A hefty helping of bedroom bandit
One warm, mushy underbelly

Combine ingredients, and face him off against a gutsy, ballsy heroine who keeps him on his toes, and the mix gets combustible.

I’m a sucker for the naughty rogue. That man who’s been there, done that, and would love to rip the T-shirt off you. But to make him truly delicious, he has to have that sense of humor, the ability to laugh at himself and whatever hell we writers toss at his gorgeous head. A man that can’t laugh and make me laugh, drops several hundred points on the Sex-O-Meter.

And then there’s that last item on the ingredient list; the warm, mushy underbelly. This is a must and means more than cuddling kittens or campaigning for world peace. After all the Alpha-male preening and posturing is done—biceps bulged, abs displayed and thighs flexed—this man has to be a single-minded machine intent on your heroine. He has to look at her and see the most beautiful, incredible, sexy and smart woman in the world, and do anything to have and to hold her.

Some of my favorites, and I say some because this is near impossible to narrow down.
Reyes Farrow from The Charley Davidson Series by Darynda Jones
Hardy Cates, from Lisa Kleypas’s “Blue-Eyed Devil”
Tack Allen in Kristen Ashley’s “Motorcycle Man”
Jericho Barrons from Karen Marie Monings Fae Fever Series

Who are some of yours? I love to hear about a new bad boy for me to fall in love with.

TOUR SCHEDULE
Goodreads ** Amazon ** Barnes&Noble ** iTunes ** Kobo
About the author:
Born British and raised in South Africa, Sarah Hegger suffers from an incurable case of wanderlust. Her match? A hot Canadian engineer, whose marriage proposal she accepted six short weeks after they first met. Together they’ve made homes in seven different cities across three different continents (and back again once or twice). If only it made her multilingual, but the best she can manage is idiosyncratic English, fluent Afrikaans, conversant Russian, pigeon Portuguese, even worse Zulu and enough French to get herself into trouble.

Mimicking her globe trotting adventures, Sarah’s career path began as a gainfully employed actress, drifted into public relations, settled a moment in advertising, and eventually took root in the fertile soil of her first love, writing. She also moonlights as a wife and mother.She currently lives in Draper, Utah, with her teenage daughters, two Golden Retrievers and aforementioned husband. Part footloose buccaneer, part quixotic observer of life, Sarah’s restless heart is most content when reading or writing books.

She loves to hear from readers and you can find her at any of the places below.

Thank you for hosting me today

My favorite bad boy trait? Knows how to woo. Rides that line between take charge and share control that leads to knee-melting madness.

Thank you for hosting NOBODY'S FOOL and Sarah Hegger today!

Absolutely, Kim. And it's a fine line there.

My favorite Alpha trait - Knows what he wants, goes after it passionately, has a sensitive side and always makes sure she knows he loves her! {swoon}