"I just reread Kate Blackwell’s “you won’t remember this,” a treasure of a short story collection. [...] Kate’s prose is invariably graceful, and her insights poignant and surprising as when the overweight Queen of May dances naked on her big suburban back lawn on a spring night. " - Goodreads, Joanne Leedom The twelve stories in Kate Blackwell’s debut collection illuminate the lives of men and women who appear as unremarkable as your next-door-neighbor until their lives explode quietly on the page.

Her wry, often darkly funny voice describes the repressed underside of a range of middle-class characters living in the South. Blackwell’s focus is elemental—on marriage, birth, death, and the entanglements of love at all ages—but her gift is to shine a light on these universal situations with such lucidity, it is as if one has never seen them before.

Vampires, Hobbits, buried giants, girls who kill by dreaming, or the guy with acne scars sitting in a booth in a King’s Family Restaurant, talking to a young girl. What is he saying? Who are they? Why are they here? You open your laptop. You begin to write.

What draws writers to their subjects?

Grace Paley: “Almost every story is an argument of some kind. You write it because you do not know something, you write what you do not know about, otherwise you would not bother to write.”

Fantasy, the paranormal, what we call realism—it makes no difference; the strange and the ordinary must contain mysteries in order to be written about. Forget the old aphorism “write what you know.” Go for what you don’t know, for what is beneath the surface, hidden like a throbbing heart.

You start with what you can see. The girl looks to be about twelve. She has green-painted fingernails. She is playing with the pepper shaker, walking it back and forth across the table. The man says, “Did I ever talk to you about pepper?”

You add a feeling, a desire, a fear, something from the past. He wants her attention, his daughter whom he doesn’t often see. The pepper stirs a memory of when he was a boy, the same age the girl is now, and his father used to take him hunting. He remembers they used bread to attract the animals, bread smeared with pepper.

“Pepper can be dangerous,” he says.

You write the story he tells the girl. You begin to understand him, who he was as a boy, who he is now. Then you write your story.

None of this is easy. The initial spark—something you observe, something someone tells you, something you dream—may sit fallow in your journal or on your computer for years before you re-discover it and begin to write. It takes time to make art out of the raw material of life or fantasy.

It was five years after I saw the man and the girl in the restaurant that I wrote “Pepper Hunt.” It appeared first in a literary journal, where it won first place in a short-short contest, then in two anthologies, and it’s now in my story collection, You Won’t Remember This. 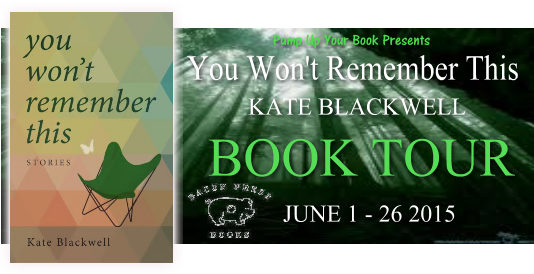 KATE BLACKWELL worked as a journalist and editor before turning full-time to fiction. Her first collection, YOU WON’T REMEMBER THIS, was published in hardback in 2007 by Southern Methodist University Press.

Her stories have appeared in numerous journals, including Agni, Prairie Schooner, New Letters, Carve, The Literary Review, The Greensboro Review, Sojourner, and So To Speak. She lives in Washington, DC.