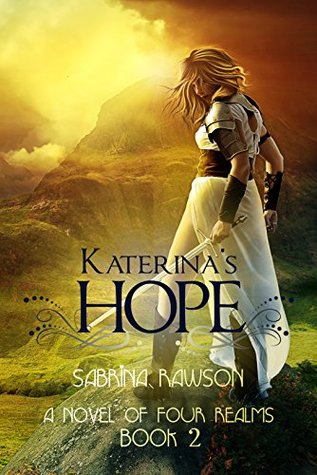 Lady Katerina Kastekanos believes Striker Wells is the other half of her heart. Assisting the High Council in talks of peace she struggles with deep rooted fears of abandonment, but can she be true to the man she has fallen in love with before her darkest secret can destroy any hope for a future with him? Before anyone can embark on the quest for the Firing Sword Katerina is kidnapped.

Striker Wells is son to Queen Briksanna and knowing Katerina is her best friend he does not feel ashamed of his love or his commitment to pledge his life to her. Before their lives can begin Katerina is kidnapped.

Devastated, Striker searches for his lost love sworn not to stop until she is found. The woman he finds is not the same woman when she was taken. Will Striker be able to overcome his personal demons of abandonment to accept the man Katerina will need him to be for them to have a lifetime of happily ever after?

Princess Briksanna has always known The Prophesy would catch up to her no matter how far she ran. Spending two thousand years hiding in the Earth Realm haunted by memories of heartache and pain in constant fear of capture by Lord Drakkoon, she finds herself unsure if she has the courage to be the person everyone needs her to be in order to stay one step ahead in a chase for her survival and of those she loves. So, when she discovers experiencing the feeling to freely love, she is pulled into a quest that will not only test the boundaries of her heart, but the life of her unborn son for the sake of saving the universe from total destruction.

Nathanial knows who he is on the Earth Realm and what kind of man he is for Princess Briksanna. But, what kind of man will she need him to be in order to fulfill The Prophesy she has spent the last two thousand years eluding? Tragedy has everyone travelling from the Earth Realm to the Second Realm of Skaldanna pushing his comfort zone knowing he has no knowledge of court expectations, but together with Briksanna and their family he believes he can succeed where all others have failed in dissolving the reign of Lord Drakkoon.

Can Briksanna and Nathanial find the undisputable faith in themselves to accomplish what needs to be done despite the sacrifices made to save their friends and family while establishing peace within the Second Realm?

Closing her eyes briefly she willed her body and mind to shut down the rampant desires his closeness evoked within her.

“You can try, Lady Katerina, but I doubt you will win.”

“Pardon me?” Shocked that he had spoken she almost stumbled in her steps.

He repeated, “You can try, but I doubt you will win.”

“I do not understand what you mean by that, Sir Striker. Pray you enlighten me.”

Sighing he stopped walking and turned towards her keeping her body close to him. “You are what I think about when I get up in the morning and what I see when I close my eyes at night. I can’t keep my thoughts far from thinking of you. What you are doing and what you are thinking is all I want to know. It takes everything within me to keep myself in check when all I want to do is spend every waking moment in solitude with you. I know there is a lot going on right now and it isn’t the best time to start something intimate with you, but I can’t help how I feel. You and me, well, we’re made for one another and I plan on doing everything possible to make sure nothing comes between how I feel about you.”

He pulled her arm indicating he wanted to walk forward and frankly she did not think she had strong enough legs to walk forward without his support after the words he had just spoken. What did he mean by making sure nothing came between them? Heart pounding in excitement she thought for a second maybe he felt deeply connected with her like she felt towards him despite having only known him for such a short time.
She battled in her heart and mind that not only was this man Briksanna’s foster son, but she had only recently met him. Was it possible his desire for her was not as fleeting as she tried to tell herself a thousand times a day in hopes to take her mind of constant thought of him?

Despite her efforts she could not shake her desire to connect with him mind, body and soul and that was what truly terrified her. She had never felt that way towards any person before and she did not feel she had a person to share her anxieties with right now. There was too much going on within her kingdom that decades of being sole ruler pressed upon her to put her feelings to the back of her mind, but her heart wanted him with a yearning she did not know if she could subdue it.

Pulling her thoughts into the present moment, “Excuse me?”

“Don’t fight how you feel about me, just go with the flow.”

She looked up at him and saw him smiling at her. She could not help it she felt herself smile in return knowing he had heard her thoughts. She almost laughed out loud at his audacity to speak frankly towards her about things that should have remained as private thoughts.

“You overstep your bounds, Sir Striker. I am merely thinking that I should keep my kingdom first in my thoughts before I allow my heart free reign over something I have never partaken. It would be remiss of me to allow such juvenile behavior rule my actions when there is so much at stake. Your family is important to me. The success of this quest is important to me. Briksanna is important to me and so is establishing her ruling monarchy within all of Skaldanna. Why would I, knowing the dangers of distraction in such perilous times, allow my desires free reign over my actions? I cannot indulge in childhood fantasies…”

She could not finish her tirade because all thought had vanished when he abruptly leaned over and sealed his lips on her mouth. Explosions went off in her head. She felt he heart pick up its beat while the softness of his lips demanded entrance to her mouth. He was forceful in his assault, yet the gentleness in the way he held her melted all thought from her mind. She sighed.

Her arm was tangled in his arm from their walk, but for some reason she had been able to grab onto his shirt for purchase. He angled his head to deepen the kiss and that was when she relented the last bit of resistance she had left in her. His remaining arm snaked around her waist pulling in her flush body even closer.

Goodreads ** Amazon ** Barnes&Noble
About the author:
Although Sabrina Rawson had been physically writing for two years the ideas that conceived her first novel had been percolating in her mind for many years. In many ways she found life experiences had influenced her story although written in fantasy format.

“There is no passion to be found playing small – in settling for a life that is less than the one you are capable of living.”

No truer words could have been said. After her first cancer battle four years ago, she was in the mindset to survive, get back to my swing of things. Problem was she couldn’t. She wasn’t the same person anymore. She relapsed by the end of the first year. She survived that experience exhausted and has had multiple tumors pop up ever since. To say her health presented a mental and physical challenge was putting it mildly. She wanted to be more, do more, and was determined to reinvent herself along the way.

What she left behind after that first surgery, was her passion for life. Cancer didn’t take that away, she put buried it along with her drive and ambition. Her creative muse happily skipped right along with the rest of her dreams leaving her disconnected. She had to rediscover herself and it was a slow personal process. Four years post her first surgery and even if she had to do it all over again tomorrow, so what! She refused to settle for a life less than what she could create for herself.

Sabrina lives in Sonoma County heart of the wine country of California enjoying life in the rural land happily married to a wonderful supportive husband. You can always find her reading a book or cooking a meal for her multitude of children.

She's like a really interesting read. I would love to read this. :))

Looks like a great book, thank you for the giveaway