Before, she knew exactly what she wanted - Confessions of a Teenage Rape Survivor by Holly Dae 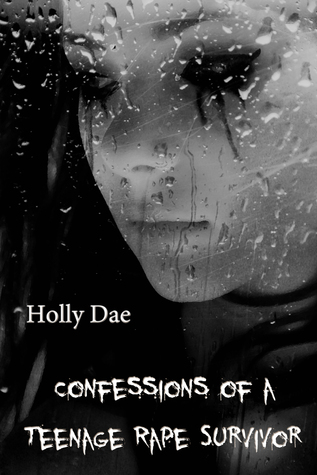 Before she was raped, almost sixteen-year-old Allison Sommer knew exactly what she wanted and was in total control of her life. Get through high school, go to college to appease her dad, somehow stay fit, lithe, and athletic through all the stress and become a professional cheerleader. Normal teenage stuff. Simple. At least it was simple before she was raped.

Now Allison's whole life is out of her control. She can't trust in her own choices, can't rationalize anything anymore, so she just goes through the motions, hoping that eventually she'll go back to normal, can stop pretending. That doesn't happen, especially when she's forced to reveal what happened to her family and closest friends.

On the MTV commercials and reality shows that emphasize that she has nothing to be ashamed of and guide viewers to some website like don't-be-a-victim.comand a support hotline, no one warns her that the aftermath is more difficult than the rape itself, that her family's efforts to be supportive make her feel more alone and confused.

And being raped has more devastating consequences than Allison ever imagined, forcing her to make one of the most difficult decisions she's ever had to make. It should be a no-brainer, everyone says, but being raped makes Allison question everything and everyone she thought she could trust.

Either way, Allison won't let anyone force her to do anything again, not like her rapists did, even if it makes her already difficult enough circumstance more difficult. Uncensored and unflinchingly honest, these are the confessions of a teenage rape survivor.

"Are those your brother's sleeping pills?" Gene asked.

Allison nodded. No use denying that.

Gene looked at her again, then at the pills, and then at Allison again. His eyes widened.

"Were you going to take all of those?" Gene asked in an incredulous tone. He didn't wait for an answer, already having assumed the worst. "How many have you taken already?"

Allison opened her mouth to reply, forgetting that one of the pills was sitting under her tongue. Gene saw it as she started to try to explain.

Gene reached across the counter to squeeze her cheeks and force the pill out her mouth causing Allison to have two instantaneous reactions. First, she spit out the pill. Second, she punched Gene straight in the jaw, which caused Gene to let go of her and grab his face.

Allison gasped as she shook her hand out. She shouldn't have done that. She didn't mean to do that. Gene wasn't a rapist. Well, she hoped he wasn't. The guy who asked her for directions to distract her didn't look like a rapist either. Either way when Gene grabbed her so suddenly, she couldn't help it.

"Are you insane? What is wrong with you?"

"I didn't mean to punch you. It was an accident. I swear."

Gene rolled his eyes, stilling rubbing his jaw. "Not the punch. I probably deserved that for scaring the hell out of you, grabbing you like that. I'm talking about those sleeping pills. That many of those things at once can kill you."

"I wasn't trying to commit suicide!"

"Could have fooled me," Gene said sliding the pills off the counter and into his hand. He threw them down the garbage disposer.

"But I wasn't," Allison said, heart racing in panic. If Gene thought she was trying to kill herself, he'd tell her brother, and her brother would tell their dad, and she'd never be left alone, and she'd have to tell the truth. Then they'd make a big deal out of it and want her to report it to the police, and the police would want a description and account of what happened, and then she'd never be able to forget. "I just wasn't thinking."

"The hell you weren't," Gene snapped as he snatched the bottle with the remaining pills off the counter and put them in his pocket.

"I was just so tired and the bottle said one pill was mild and good for four hours of sleep, so I decided to take enough to knock me out for a day," Allison tried to explain.

"Six pills would have knocked you out all right," Gene said as he began to dial a number into his phone.

"What are you doing?" she asked apprehensively.

"Calling your brother," Gene said and then cursed. "Damn it. I have his phone in my pocket. Do I have your dad's number in my phone?"

Allison lunged for the phone. In all likelihood, he probably didn't have her dad's number, but she didn't want to chance it.

"You can't call tell them," Allison said grabbing onto the phone.

Gene tried to pull it out her grasp as he said, "Sure. Not telling your brother and father that you're suicidal is a great idea."

"Says the girl who was about to take six sleeping pills," Gene said getting the phone out of Allison's grip and holding it out of her reach.

Allison all but tackled him into the counter.

"I told you!" Allison screamed, exploding in anger. "I'm tired! I just wanted to go to sleep without the nightmares! You can't… You can't tell them," Allison finished, all her anger dissolving as a sob escaped her throat. She hadn't even noticed she started crying.

She stopped trying to get the phone then, falling onto the floor as her body shook with sobs of fear at what Gene would do and anger at herself. When did she get so weak?

Holly Dae is a recent college grad with a B.A. in English who, instead of putting on a suit to work at a desk 9-5 for five figures and a lifetime of misery and crushed dreams, decided to write YA novels about the taboos concerning contemporary issues like rape, abortion, drugs, teen pregnancy, and sometimes sex with the hopes that someone will pat her on the back and say she touched their life.

i like the cover and the excerpt even it's scary..read about rape
but thx u for hosting...

I enjoyed the excerpt.

intrigging except makes you want to continue reading

it sounds different! in a good way

Sounds like a very intense and emotional read. The excerpt I read it on good reads and it was very good. thank you for the giveaway