Review and Giveaway: Legend of the Chupacabra by Michael Hebler 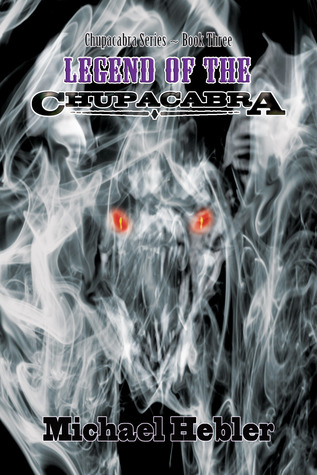 It seems that it becomes a habit of mine, at least this is the case for the last reviews, to start a little atypical, with what I would rather call the end or the final recommendation: to read the book or not. Maybe it's just a coincidence, but the situation in which I find myself reading the volumes of a series at a few months (even a year) distance, is not one that I prefer. But with the new released books you don’t have a choice, I can only give you an advice: leave aside everything you do, put your spurs, take the reins and jump in the saddle! Yes, because the novel of which I will speak to you is a Western, and not an ordinary one, so prepare yourselves for one hell of a ride that lays in front of us!

So, as I said in the first lines, this is my recommendation: yes, the Legend of the Chupacabra is a book worth reading!

Another mention for those who do not know the series would be to not jump directly to this third volume, Legend of the Chupacabra. The books are not stand-alone type, the story continues from one volume to another, the main characters are the same, of course some will leave us, some new ones will appear, but the story is linear and if you don’t read the novels in the given order, the loss is yours.

The story can be linear, but that doesn’t mean it's a boring one. Each volume brings something new in the atmosphere, set and adventures. The third volume, Legend of the Chupacabra, will make no exception and it will be an exhilarating adventure full of thrill. An interesting story loaded with mystery in which you will find that our heroes, as many as they are left, didn’t break the curse. A curse that will make the Wild West big bad boys scream in fear like little girls. A curse that makes unimportant the speed at which you pull the gun from the holster, but the intelligence with which you handle an unknown situation. Because the unknown is the key word in this novel. And because the unknown is the mother of angst, all that will follow will be once again a race without brakes. There will be no limits and no restrictions. Is there any point to tell you that you will not lack of anything? As befits an adventure book, in Legend of the Chupacabra you will find all the ingredients that will make you to read breathless: unpredictable situations, action, intense fighting, mystery, unexpected twists, thrills and a denouement that will leave you crave for the fourth volume of the series Dawn of the Chupacabra that will be released next year. But as a plus of Michael Hebler’s story is that his novels are not a cliffhanger type; you’ll not have that dumb feeling like "What the hell he wanted to say” or “what the hell is going to happen and when I will find out”?

Michael Hebler will not let you down.

Earlier this year, Hebler’s first volume in his Chupacabra Series, Night of the Chupacabra, earned him top honors in the category of “Horror” from the National Indie Excellence Awards. The NIEA was founded by Ellen Reid, the current President and CEO. Reid comments, “The awards celebrate the best of books in print, and represent a diverse group of first-time authors and seasoned authors.” Hebler was extremely honored to have received such extraordinary recognition for a story that had lived within his mind and heart for 20 years before its 2012 release.

Born in the early 1970's in Los Angeles County to a salesman and a homemaker, Michael dreamed of following his passions for entertainment and storytelling by becoming an actor. It was while studying theatre arts at Orange Coast College in Costa Mesa, California, that he realized his penchant for stories was better suited on the page than on the stage. However, creating tales with suspense, laughter, and heart is not Michael's only love. Hebler also enjoys volunteering in his local community for Meals on Wheels, as well as aiding in the capture/spay/neuter/release feral program.

On October 7, 2014, Hebler also will release The Ghost of Christmas Past, a spiritual novella placing Dickens’ notorious Spirit in the center of its own afterlife, and life, while aiding a woman's complicated past.

Author's Giveaway
a Rafflecopter giveaway
Posted by GZM at 5:52 PM

I LOVE this series. My review for Legend goes up in the morning. My Christmas wish is have the complete series in print. Starting with the three for this year and a new one each Christmas to come. I think it's well worth the wait for each new book and the next one promises to be quite different! Thanks for your great review. It's nice to chat with another chup fan!